If, like me, you prefer tea to coffee and view Starbucks with the same contempt as you do McDonalds, don't let the name 'Coffee House' put you off. Granted, this is the kind of slick music coffee shops love to play, but there is some very good-quality material here that's worth hearing, whatever your preferred beverage. 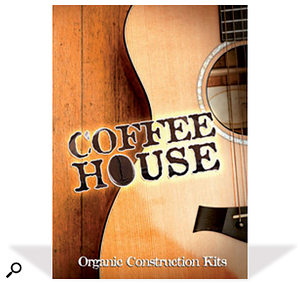 Josquin des Pres — a player on the San Diego coffee house scene — has overseen the production of this collection, which comprises 909 drum loops, percussion, bass, guitar and keyboard parts, recorded specifically using analogue tube gear. The result of his project is 3.1GB of content, formatted for REX2, WAV and Apple Loops (making 5.6GB in total). There is no messing about with product keys, registration and all that tiresome rigmarole; you just grab the content from the disc and away you go.

Coffee House uses the familiar construction-kit format, offering 32 kits, each of which has its own folder. Each folder is topped by a WAV file, which is effectively a demo mix of all the instrument parts, illustrating how they fit together as an arrangement and in terms of level. The other files in the folder are the recordings of each instrument, and there is an 'Endings' sub-folder, containing final hits from each participating instrument.

Like Starbucks — where you can construct your own drink — the kit parts allow the user to arrange their compositions from the supplied building blocks. Also like Starbucks, which promises consistency throughout its chain, using these kits pretty much guarantees a genre-matching sound. Good news for TV and film composers.

More generally, there are plenty of sounds worth having, even if coffee is not on the menu. In particular, there are many groove-tastic drum and percussion parts that could be looped for use in numerous ways, and most arrangements have a line or two of djembe, conga, bongo or shaker.

As for stringed instruments, guitars, especially acoustic ones, are king. Both plucked and strummed acoustics feature heavily and have been played so that they work up-front in the mix. The electrics are mostly clean and jazzy/country, but with the occasional tremolo, chorus and light distortion effect. The basses are typically light and not intended to be prominent, although there is the occasional Mick Karn-esque fretless.

In terms of keyed instruments, the variations are Wurlitzer, Rhodes, Mellotron strings and piano. These parts usually play a supporting role to the guitar, making them useful for breakdowns, intros and loops.

Compared to some collections, this one has a reasonable variety of tempos, some demonstrating more of a laid-back country feel, and one almost going into 'Down Under' by Men at Work! Just about every key is covered at least once in major and minor forms. The word 'Organic' in the collection's subtitle is a reference to the absence of electronic programming, rather than a lack of pesticides and chemical fertilisers, and the feel is very much of a small band skiffling away. The recording quality is top-notch, sounding fulsome and punchy but without ever being harsh. As for the playing, it is so precise and clean that one could be forgiven for thinking that some non-organics were used to tidy it all up.

Musicians wanting to dissect this style of music should have a listen, and jobbing producers will find it worth adding to their tool kit. Tom Flint