Although it may look very similar to their existing Baby Bottle, this new mic from BLUE turns out to be a different beast entirely.

The BLUE microphone company — the name being derived from Baltic Latvian Universal Electronics — have built up an impressive portfolio of microphone models spanning a wide price range, and all with distinctive, quirky styling. These hand-built microphones are mainly studio condensers (although there are a few dynamic models too) and are mostly put together in Riga, Latvia. All employ Class-A circuit topologies in the head amps, with either valve or solid-state (FET) active devices depending on model, and most feature transformerless outputs. 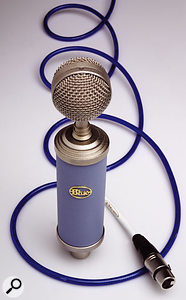 The latest addition to the line-up is the Bluebird model: a large-diaphragm cardioid capacitor microphone. It's not a new design as such — but it was previously only available as part of a package with various Digidesign and Focusrite products. The good news is that the versatile Bluebird is now available in its own right, along with an impressive kit of parts that includes cable, shockmount, and bespoke pop screen.

Superficially very similar in size and styling to the Baby Bottle (reviewed in SOS November 2002), the Bluebird is slightly unusual in the BLUE line, as it has been designed to suit a wide range of applications. Most of BLUE's models are optimised for specific applications, but the Bluebird is a true general-purpose mic, equally at home recording vocals, electric or acoustic guitars, drums, percussion, piano, brass, strings, and so on. However, it has been optimised for fairly close placement — the contribution of the proximity effect is required to reproduce an accurate bass response.

The Bluebird is the same size and overall shape as the Baby Bottle, and I dare say many will confuse the two from a distance. However, there are several obvious differences when the two microphones are viewed at closer quarters. Although the dimensions of both models are identical at 220mm in length and 44mm in diameter, with the capsule housing removed from the body at the end of an inch-long stalk, the capsule head of the Bluebird design is fractionally larger than that of the Baby Bottle — and whereas the latter's capsule casing is spherical, the Bluebird's has a flattened front surface. Perhaps the more obvious difference, though, is that the body tube of the Baby Bottle is a discrete black, while the Bluebird is a tasteful pale blue. There are other more subtle differences between the two in the shape of the various metal mouldings that decorate the body, and, intriguingly, the review model's identity badge claims that the microphone is 'Made in the USA' as opposed to in Latvia.

Like most mics, the manufacturer's logo identifies the front of the capsule, and the base of the body incorporates a male XLR to carry the output signal. The specifications suggest a sensitivity of 27mV/Pa (2dB lower than for the Baby Bottle) with a noise floor of 7.5dBA (a corresponding 2dB higher). Part of the juggling of figures here is in order to enhance the Bluebird's ability to cope with the high sound levels which might be encountered in instrument close-miking applications, and as a result the Bluebird's maximum SPL (for 0.5 percent distortion) is 138dB (the Baby Bottle's maximum SPL is specified at 133dB).

The capsule itself is edge terminated and features a six-micron gold-sputtered mylar diaphragm. The mic's electronics are phantom powered in the usual way, drawing a modest 1.8mA of current from a 48V supply, and able to operate within the specifications on supplies down to 35V. The microphone's specified output impedance is an unusually low 50Ω, and it requires a minimum preamp input impedance of 1kΩ, with 2.5kΩ being suggested as the optimum.

The specifications claim a meaningless 20Hz-20kHz frequency response, but the rather stylised frequency-response chart provided in the handbook reveals a reasonably flat overall response with an airy peak centred at about 12kHz and a small presence lift at about 2.5kHz. The bottom end rolls off smoothly and gradually from about 500Hz when the mic is used at a distance, but this is easily compensated for by the proximity effect when the mic is used at close range to the source.

Although described as a cardioid mic, the polar response chart reveals hidden hypercardioid tendencies above 1kHz, where the rear rejection struggles to better 10dB. However, in the regions around 130 and 220 degrees the rejection nulls become quite prominent, exceeding 20dB above 500Hz, so I would strongly suggest thinking of this mic as hypercardioid when placing it in order to optimise the rejection of unwanted spill from nearby sources.

In addition to the microphone itself, supplied in a smart wooden box, the Bluebird kit also includes an accessory pack. This contains one of Blue's own bespoke 'high-definition' microphone cables — in this case a six-metre 22awg Blueberry cable — plus a specially designed Birdcage cradle shockmount and the Birdnest metal-mesh pop filter. 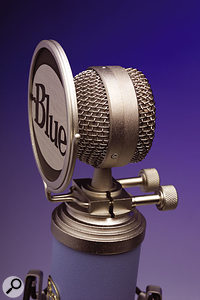 The mic cable appears to be good-quality cable with a transparent blue plastic sheath revealing the braided cable screen beneath. However, the connectors appear to be quite close copies of standard Neutrik connectors rather than the real thing, and the screen braid is soldered to the metal connector bodies at both ends (as well as to both pin-one contacts, of course). This practice can lead to the creation of ground loops and hums when connecting some equipment, as it can link the chassis and signal earths together.

The shockmount is a common design, often seen supplied with Chinese mics, comprising an inner tube supported from an outer cradle by top and bottom zigzag elastic loops. A pair of level arms are used to expand the felt-lined inner tube slightly to allow the microphone to be installed, and releasing the arms then clamps the mic firmly in place. The mic stand adaptor has the American standard 5/8-inch thread, and unfortunately a European 3/8-inch adaptor wasn't supplied.

The Birdnest pop screen is a thing of beauty — a metal disc 65mm in diameter supporting a fine gauze-mesh screen printed with the Blue logo. This is held in place by a two-part metal block, and is anchored via a pair of knurled bolts. Releasing these allows the block to be split in two and clamped around the stalk below the Bluebird mic capsule. The pop screen is then fixed firmly about 15mm in front of the capsule, lending an air of professional superiority and expense to the set up.

I have used the Baby Bottle quite a lot over the last year or so, but find its rather forward upper mid-range is the determining factor over the sources I can use it with. For harder rock-style vocals it can be great, but I often find it a little too aggressive sounding for gentler vocalists or most instrumentalists — although it can work very well to give acoustic guitars just the right edge to cut through in a complex mix.

In contrast, the Bluebird sounds smoother through the mid-range and upper mid-range, but with a sparkly brightness towards the top of the spectrum that implies more detail, air, and resolution than is really there. It works well though, and has a crispness and clarity that suits most music genres. Vocalists who sounded too hard or fierce on the Baby Bottle were far more natural on the Bluebird, and despite the falling bass response shown on the frequency plot in the handbook, the bottom end was actually nicely rounded and full, being well balanced to the rest of the sound spectrum. The pop screen works well, and everyone who saw the mic loved the way it looked with the screen attached.

I also tried the Bluebird on a clarinet and a sax, obtaining nice crisp results from both, and as an overall mic above a percussionist it delivered clear detailed transients that sat nicely in the mix. In this last application, the relatively distant placement above the percussionist's hands resulted in a weakened bass response which undoubtedly helped by reducing any tendency towards muddiness from other instrument spill.

In use, the mic clearly has a hypercardioid polar response, and I don't understand why it is marketed as a cardioid — there is an obvious rear tail, with the rejection nulls being to the sides exactly like a true hypercardioid. Nothing wrong with that, of course, but an odd marketing approach nonetheless.

In many ways I preferred the Bluebird to the Baby Bottle, principally because I found it more flexible and compatible with a wider range of sources. I also prefer the blue body! In general terms, this mic fitted in nicely with my own mic collection, serving as a general-purpose mic alongside my Audio Technica AT4040s. It was obviously a lot quieter than my AKG C414B ULS mics too, but with a similarly wide dynamic range. Although the Bluebird's size makes it slightly harder to place sometimes, and rather more conspicuous, its distinctive shape and colour often worked very much in its favour, making it an ideal choice when some ego-flattering was required!

This is yet another good quality mic from Blue, and one that can truly be described as a versatile, general-purpose mic. It looks great, sounds smooth and detailed, and is remarkably quiet. The included accessory pack is well worth having too and, apart from minor reservations about the cable wiring and the lack of a 3/8-inch thread adaptor, it makes the Bluebird kit very cost effective.

The Bluebird sounds as attractive as it looks, and represents a useful and versatile addition to the BLUE range. Although more hypercardioid than cardioid, the mic's frequency response is sufficiently neutral to suit a wide range of instrumentation and voices, and the supplied shockmount, pop screen, and cable make this an ideal high-quality option for novice or experienced user alike.