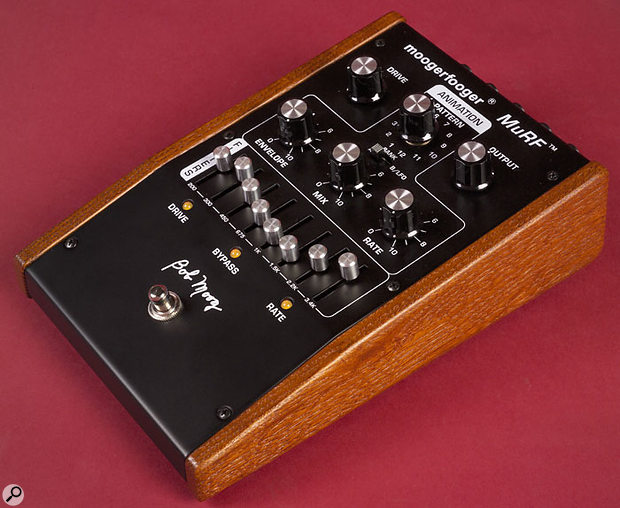 This unusual effects pedal combines a bank of eight band-pass filters with an analogue-style control sequencer.

Bob Moog is one of the legends of electronic instrument design, without whom synthesizers of today might look — and sound — very different. Even after 50 years of building synths and Theremins, his enthusiasm seems undimmed.

The MuRF (Multiple Resonant Filter) — is the latest in the Moogerfooger line of analogue effects pedals. It offers eight resonant band-pass filters plus an Animation Sequencer to generate rhythmic modulation. Add voltage control of key parameters and a morphable envelope shaper into the equation and an intriguing electronic adventure awaits!

Although resembling a guitarist's stomp box, the MuRF cannot run on batteries. The manual warns that the correct power supply should be used, but I can't report whether that makes a difference since there wasn't one supplied with the review model. Happily, one of my generic Maplin jobs worked just fine. The MuRF is beautifully constructed, having the same classy appearance as the other pedals in the range. The knobs feel excellent and the sliders are smooth and suggest durability. Even on so small a device, the hardwood end cheeks are a worthy reminder that Bob Moog produces his musical instruments with care.

At just 22.5 x 15 x 6cm, this pedal won't take up too much floor space, although given its hands-on design I can't see many people leaving it next to their toes. In fact, with its interfacing potential (the 'muggerfuggers' together almost comprise a small modular system), I suspect the majority of users will be analogue-synth nuts rather than guitarists. As such, I expect many of us would love to see the 'fuggers rackmounted, with knobs and jack sockets on the front. That selfish thought out of the way, I cleared some desk space, ready to begin twiddling.

The MuRF is designed to accept a wide range of signal sources from guitars to keyboards or mixer auxiliaries. Signal levels are taken care of with the Drive control, using its tricolour LED as a handy visual reference. When the LED goes green, the input signal is too low to distort; as the level increases, the LED goes yellow to indicate mild distortion; and the red LED shows higher levels of distortion. The robust stomp-box switch is used to toggle the operation of the pedal: when the Bypass LED is red it means the effect is bypassed; when it's green the filtering effect is active. The unit has a single quarter-inch mono input and two outputs — about which more later. Initially, I connected just the Left/Mono output, plugged in a synth, adjusted the Drive rotary control, and within minutes had a pretty good idea what was in store.

Band-pass filters, as their name suggests, filter all but the frequency band around the cutoff point. The chosen frequencies of the MuRF do not overlap, and as each is a resonant filter, the frequencies are emphasised producing the characteristic electronic fizz we know and love. Other than their levels, the parameters of the eight filters are largely hidden from the user. Thus, there are no accessible controls for frequency or resonance; each filter's centre frequency is fixed, as illustrated on the Moogerfooger's panel. The frequencies are: 200Hz, 300Hz, 450Hz, 675Hz, 1kHz, 1.5kHz, 2.2kHz, and 3.4kHz. If you move all the sliders down to zero, the output of all the filters is zero and you hear nothing. 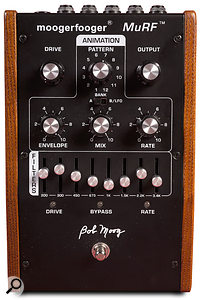 There are essentially two ways to approach the MuRF — either you can introduce static tonal changes or you can create rhythmic patterns using the Animation controls. To better understand the effect of each filter on your source material, it's logical to start sans Animation. In order to do this, select Pattern one with the 12-stage selector and rotate the Mix knob fully clockwise so you hear only the filtered output. Then push all the sliders up to maximum and throw in some harmonically-rich sounds (such as lush string or choral pads) so the filters have plenty to work on. It became instantly obvious that, although the pedal may look like a graphic equaliser, eight band-pass filters together will significantly colour a signal in a way that conventional EQ doesn't.

Experimentation with the sliders is an intuitive way to familiarise yourself with the subtleties of the MuRF; you can hear the characteristic tones of each filter and can listen to them in isolation or in any combination. Many warm analogue timbres can be achieved using this technique alone. Having established a feel for the basic tonality, it's time to explore the effects of filter automation. In order to do this, select any Pattern other than number one.

At this point, I should explain that there are two banks of 12 preset Patterns — 'A' and 'B' — selected by a small switch. The first Pattern in each bank is static and the remaining 11 comprise sequenced triggering of the envelopes that shape the filters' output. Each of the eight filters has its own AD (attack/decay) envelope, and Moog have implemented an ingenious one-knob morphing control. Turn this Envelope knob and the envelopes are gradually transformed from 'instant attack' short blips to punchy percussive shapes, followed at the mid-point of the knob's travel by even attack and decay stages. Furthermore, the envelope times slow down as the Rate is decreased — so at very slow tempos, rhythmic Patterns with long attacks become amorphous and drifting, blurring the distinction between one filter and another. When the Envelope knob passes its mid-point, attack times start to become longer than decay times and as you continue to turn, the output resembles a backward tape effect with a languid attack followed by an abrupt decay. At the furthest clockwise turn, the envelopes become inverted blips — the mirror image of the starting point.

So what of the Patterns themselves? Well, all of them loop in a forward direction at a speed determined by the Rate knob. Each Pattern has its own pre-defined length, and filter envelopes may be triggered on any combination of steps from none at all to every one. By triggering the filters in different orders, cascading patterns are formed which, depending on the Rate and Envelope settings, provide either snappy rhythms or ethereal washes. Although the Patterns are fixed, there is considerable mileage to be extracted from them by merely adjusting the level of each filter using the sliders.

This is not a complex effects pedal and mostly you won't even need the manual. However, it does contain an invaluable appendix illustrating the built-in Patterns and the order in which filters are triggered in each. (See the 'Selected Animation Patterns' box for descriptions of some of these.)

Each Pattern may be spiced up considerably, courtesy of the MuRF's four voltage inputs. These offer external control of: Rate, Envelope, LFO/Sweep, and Mix. The Rate input is provided so you can introduce shifts in tempo as if turning the knob. This is particularly effective when you're working with slow tempos and you wish to apply the occasional unexpected movement.

Variations in timbre can be applied via the Mix jack, which sets the balance between the unprocessed and processed signals. You can use an external analogue sequencer to transform a sustained chord into a punchy MuRF Pattern or to smoothly fade in an animated sweep. Another means of adding variation to the Patterns involves the LFO/Sweep input. This works slightly differently on each bank: for bank-'A' Patterns, a pedal or CV source connected to this input enables small shifts to be made to all filter frequencies, resulting in a phaser-like effect. The Patterns in bank 'B' respond slightly differently, because they feature a built-in sine wave LFO that automatically sweeps the filter frequencies up and down en masse. The rate of the LFO is fixed in each Pattern, but can be varied via the LFO/Sweep input. 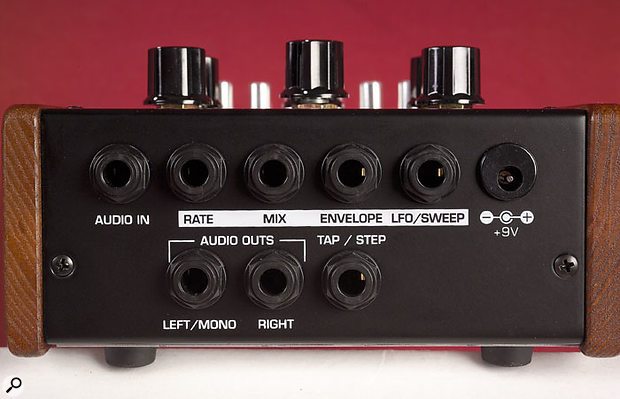 All the voltage inputs are stereo jacks designed to work with Moogerfooger EP1 expression pedals, or equivalents. It's important to note that the range of control available from such expression pedals is relative to the physical position of the corresponding knob. Thus, to remotely control envelope shape, set the knob to its middle position and move the pedal over its the full range to mimic the rotation of the knob. Happily, I found that connecting standard mono jacks from my modular synth also worked without a hitch. For my money, using these inputs for voltage control is a master stroke — you can use an analogue sequencer to automate the transition from zappy to swooshy envelopes, and breathe extra life into any Pattern.

In addition to the CV inputs, a Tap/Step input socket provides synchronisation of Pattern animation with other material. Simply connect a standard footswitch and tap it three times to establish the tempo. When the rate is set in this way, the Rate LED goes green, and only when you override it by turning the Rate knob does the LED go red again. I found that the MuRF kept good time when manually synchronised in this way. If, instead of a pedal, you connect a clock source derived from an analogue sequencer (or MIDI/CV convertor), the tempo doesn't lock instantly since it requires those three 'taps'. So this isn't quite as useful as having a dedicated clock input. Furthermore, when the MuRF listens to the incoming pulses, it sets the tempo at double the speed it measures — so if you tap in eighth notes, animation runs at sixteenths. This makes it easier to tap in tempos with a pedal, although you'll need to divide the clock output from your sequencer.

Finally, I mentioned earlier that the MuRF has two audio outputs. When both are connected, all the odd-numbered filters are sent to the left output, and all the even-numbered filters to the right.

The MuRF is quite specialised, offering a unique flavour of rhythmic animation. It can also supply analogue warmth, distortion, or subtle flavouring to a wide range of sources, and it's small enough to throw into your gig bag for that something extra live. Having used it in the studio for several weeks, I find myself turning to it when I need an extra layer of fuzziness from my virtual analogue synths or, using both its outputs, to add spaciousness to monophonic drum loops or solo parts.

Although the list of Patterns is finite, the choices made are all usable. In combination, the level sliders, morphing envelopes, and voltage-control inputs offer more scope for variation than you might expect. Yes, it would have been wonderful to trigger each filter envelope independently or to tune the frequencies of individual filters. However, faced with a fixed set of options, you are forced to employ those special, mystical powers — imagination and creativity.

The Moogerfooger range is fast becoming a complete analogue toolkit, and I suppose it is inevitable that some tools will be more popular than others. I see the MuRF not as the screwdriver you reach for when doing every job, but as that quirky right-angled ratchet thingy that, once mastered, is always kept somewhere close to hand.

The MuRF, with its eight resonant band-pass filters, can be employed to add warmth and shimmer to precise, digital sources. Alternatively, it can generate dynamic animated patterns or more subtle, phasey movement. Endowed with voltage inputs for interfacing with other analogue gear, this is a versatile effects processor with its own distinctive character.