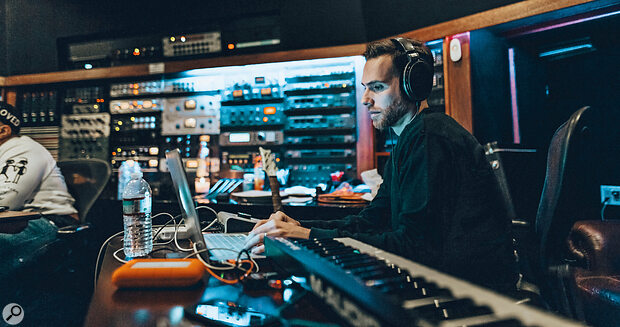 His remarkable versatility has made Federico Vindver the go‑to collaborator for Timbaland, Kanye West, Coldplay and more.

In 2019, Federico Vindver was working with Kanye West on the album that became Jesus Is King, when Kanye announced a new rule for everyone in the studio: “We can never have more than four sounds at the same time.” Rick Rubin would sometimes use a similar directive, and it’s one that certainly concentrates the mind and, indeed, the ears.

Federico considered the options on the piece they were developing. Kick, snare and vocals were already there, so there was room for only one more sound. Maybe lose the kick for a bass? Maybe make it all voices? Whatever the solution, it had to be restricted to four sounds.

“That was a situation where simplifying helped a lot,” Federico recalls. “Like, how do you make a chorus or some other section really pop if you only have this very limited amount of options? Sometimes you have to simplify more. Sometimes we’d even go to a cappella sections. For example, ‘Use This Gospel’ on that album has a Kenny G sax solo, and so we had all these combinations of how to do that solo. Do we put a pad behind it, or a piano, maybe? In fact, we made it kind of an a cappella sax solo for the most part. It really brought your attention to it! Imagine, though, if it had big drums and pads and bass — it would not have had the same shocking effect. That was definitely a situation where ‘less is more’ applied.”

Federico Vindver: Working with Kanye, it can be everything from miking that 150‑piece choir down to a song that just needs a better kick drum.

This sort of adaptability has been the key to an unusually diverse career. “Something that defines me as a producer,” he says, “is that I love to work with artists who are completely different from each other.” He’s not joking. He’s worked with everyone from Mariah Carey to Tee Grizzley, from Christina Aguilera to Chance the Rapper, from Muse to Justin Timberlake.

“One time I was working with Polo G, a great young rapper from Chicago, and at the same time I was finishing a song with Josh Groban and Kirk Franklin, completely the other side of the spectrum. I thought, well, nobody under the age of 50 would probably buy Josh’s record, and at the same time I’m working with a guy who nobody over the age of 18 might buy his record.” He laughs at the thought, enjoying the diversity.

“And then I’ll go to Nashville and I’ll make some white American records, I’ll go to Atlanta and work on more street hip‑hop records, and from there to Miami or Colombia to work on some ghetto Latin records. And I’m working with mega‑superstars who are gazillionaires, then back to new artists who have no money. I go from country to hip‑hop to rock to anything.”

Rick Rubin comes to mind again. “Yes, he’s one of my heroes. He has meditation‑music albums with Middle Eastern chanting, he has heavy metal, he has hip‑hop. That’s the kind of producer I’m trying to be, somebody who can tackle very different projects. It keeps it fun for me. I was just doing a Christmas album with Meghan Trainor, all orchestral, big‑band, Nat King Cole‑sounding things, and from that I went to something weird and electronic with a Latin artist. Then I did some reggaeton records. That’s what I love about music. I love it all!”

Federico was born in Argentina. When he was 19 he moved to Spain and then to Mexico, to a gig playing piano at a big hotel resort there. He practiced assiduously during the day, and in his early 20s he majored in jazz performance at the Frost School of Music at the University of Miami. “It was a comprehensive programme that also offered conducting, orchestral arranging and computer technology,” he says. “That four‑year course really helped me out on so many levels.”

He was playing keys with a variety of bands, mainly to make ends meet, and that inevitably led to some recording sessions. “The producers didn’t really know much about music. They were more like engineers working the computer. I was always very computer‑savvy; I’d taken a year of computer science in Argentina, too. So I’d see these guys and think man, I can do better — because I know music. All I’ve got to do is learn this Pro Tools thing.”

His budget didn’t allow that, exactly, but a friend gave him a beat‑up PC and he acquired copies of Acid Pro and Fruity Loops, plus a “really bad” soundcard, and he began making tracks. “The bands we were playing with would say, well, your really dumb setup actually sounds better than the studios we’re going to, so we’re going to do it with you. And that’s how it all started.”

He studied the music he liked, curious how people like Timbaland, or Pharrell and the Neptunes made their tracks, and attempted to emulate them. He started touring, notably with Lauryn Hill and then Marc Anthony, Jennifer Lopez and Ricky Martin. “Even then, I was trying to produce whoever I could on the side. And I’d always be on my laptop. If I wasn’t making tracks, I’d be learning plug‑ins, learning music, listening, always doing more at the same time.”

Eventually Federico realised he liked the studio more than touring, so he moved to Los Angeles to try to become a full‑time producer. The biggest problem he faced at first was how bad his computer was. It would freeze every 20 minutes or so — which at least taught him how to work fast. He had a Yamaha Motif keyboard he used for gigs, and he’d record that. Quickly.

Around 2006, Federico graduated to a MacBook Pro and Logic, which came with some very usable plug‑ins. It was a big improvement, and his music‑making and recording moved steadily forward. He met Timbaland during a session for a band called New City and began working more with him, and that in turn led to Kanye West. 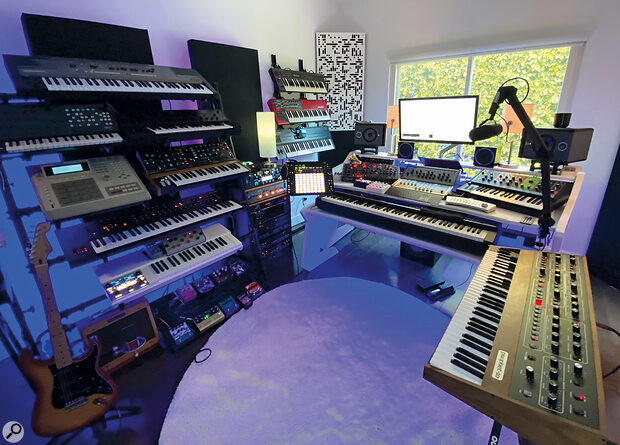 Although he laments that he doesn’t get to spend as much time there as he’d like, Federico Vindver has a well‑equipped studio of his own.

Kanye wanted to work with Timbaland, but their respective schedules never quite coincided. One time, though, Tim and Federico had been working on some...