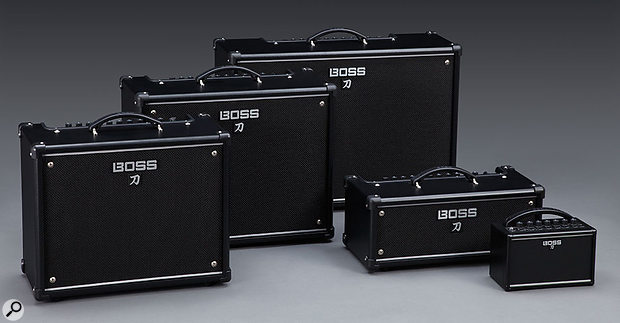 Towards the end of last year, Boss announced the Katana series of guitar amplifiers, which we’re told owe much to their ‘Waza’ amplifier development programme. The Katanas are affordable modelling amplifiers built into MDF (rather than the more expensive plywood) cabinets — but they’ve already proven so popular that we’ve only just been able to get our hands on one to review.

At the time of writing, the range comprises three combo amplifiers and one amp head: the 50W KTN50 and 100W KTN100 combos each incorporate a single custom 12-inch speaker, while the Katana 100/212 delivers 100W of power into two 12-inch speakers; and the 100W Katana-Head has no cabinet but does include a small built-in monitor speaker for practise, and can be hooked up to any speaker cabinet of the appropriate impedance. As we were going to press, the Katana Mini version was announced, and this puts some of the same technology in a smaller, more portable, battery-powered unit.

In many ways the formula is quite familiar — you choose one of five amp models (Clean, Crunch, Lead, Brown and Acoustic), tweak the tone using a familiar range of drive, volume and bass/middle/treble tone controls, and then add the built-in effects. The Acoustic setting is not an acoustic emulation, but rather a setting to make the best of electroacoustic guitars. For home or recording use, you can dial in a lower power level (the minimum being 0.5W), via a rotary switch, and four user memories (two on the 50W model) are available; you press and hold the desired button to store the current settings or press briefly to recall the stored settings.

The effects section is already generously provided for, as I’ll describe in a moment, but it can be expanded using the free-to-download Boss Tone Studio editor software, which allows you to choose from 55 Boss effects. Up to three effects (one each from the Booster/Mod, Delay/FX and Reverb sections) can be used at once. You can access 15 effects from the front panel and there’s a tap tempo button in the Delay section. An illuminated button steps through the three effects options per effect, the button’s colour changing accordingly, and turning the knob fully anti-clockwise turns the effect off. Furthermore, the Booster/Mod and Delay/FX switch to different effect types once the control knob passes the halfway point, meaning you actually get a choice of six effects types per category. Reverb delivers only reverb, but you can choose from three different reverb types. All Katana models include footswitch and expression pedal inputs plus a speaker-emulation on the headphone output. The Katana-Head can also be controlled via MIDI.

We were sent the 2x12 combo purely because it is what was available, though for studio use and the occasional pub gig I imagine the 50W model would do the job perfectly well and put less strain on both your back and your wallet. The 50W model doesn’t have the send/return loop of the larger models in the range (though it’s hard to imagine an effect that’s not already catered for!) but all models have a USB recording output, with drivers available for both Windows and macOS via the http://bosstonecentral.com web site.

The software is very user friendly; it allows effects to be selected and edited, and the controls are closer to what you’d expect to see on a typical pedal than a studio effects processor. You can play through the amp and listen as you change or edit effects, then when you’ve loaded in your preferred choice of effects and settings, you have what amounts to an amp with a customised effects section tailored to your own needs.

By way of sonic character, the Katana sounds and feels very ‘real’, and thanks to the choice of amp models it can cover all genres from clean country to nasty rock, with plenty of classic rock and blues possibilities in between. I particularly liked the Brown amp setting for more classic tones — it sounded very natural when just pushed to the edge of breaking up, and I could control that just by using the guitar’s volume knob. It’s well worth experimenting with the gain control settings too, as there’s quite a difference between running with the preamp turned up and the master down, and doing the opposite. You can coax a very touch-responsive sound from the amp, and though I still prefer my Blues Cube for my own purposes (there’s a review of the latest model in this issue), I can’t help but be envious of the Katana’s effects section, which covers just about all requirements. I wasn’t knocked out by the somewhat wobbly sounding pitch shifter that I loaded via the software but, overall, the delays, reverbs and mod effects are all very smooth and musical. I certainly wouldn’t miss not having an effects loop on the 50W model.

Overall, then, the Katana amps represent extremely good value for money and manage to provide more than enough flexibility without getting the user bogged down in complexities. Even if you never use the editing software you won’t feel cheated — but if you decide to use it to swap one of the existing mod effects for a rotary speaker or Univibe, for example, you’ll find it very intuitive. Even the smallest amp in the range is loud enough to handle small pub gigs while being equally at home in the studio. So don’t dismiss this range because of the affordable price or the MDF cabs — they are really rather good.