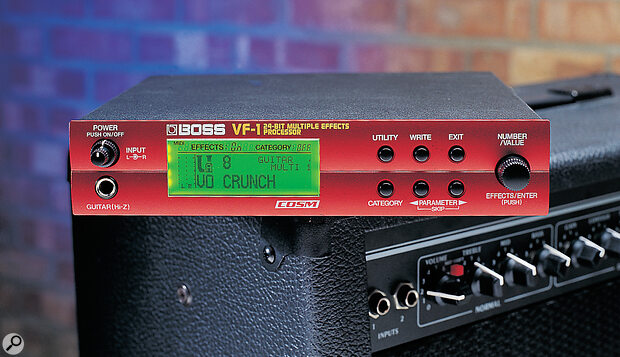 Is it an amp simulator? Is it a multi‑effects unit? Is it a mastering tool? John Walden tries out the tiny Boss VF1 and is surprised at how much jumps out of the box.

Built using similar COSM technology to that found in products such as the VG88 (see the review on page 74 of this very issue), the VF1 is a bit of a jack of all trades. Its most obvious role is as a guitar recording preamp with 24‑bit stereo multi‑effects and an S/PDIF digital output. It can, however, also turn in some synth‑like processing on either guitar or bass, do acoustic guitar and microphone simulations and, as if all that wasn't enough, it also offers basic mastering functions that could be applied to add gloss to a finished mix.

The VF1 is housed in a striking metallic‑red case of half‑rack size — an optional kit is available for rackmounting it if necessary. A standard guitar input is available on the front panel underneath the dual‑concentric input‑level control. The rear panel features MIDI In and Out, pairs of quarter‑inch analogue I/O jacks, another quarter‑inch jack for an expression or control pedal, and an S/PDIF digital phono‑type output socket. The manual does a good job of explaining how to hook up the VF1 either with a guitar amplifier (for live use) or as a DI or multi‑effects unit in a studio environment — both input and output levels can be adjusted to accommodate most eventualities.

The VF1 contains 400 patches split into four equally sized banks; two read‑only preset banks and two user banks that can be overwritten. Like the UA100 (reviewed in SOS February 2000), the patches are based upon a number of processing algorithms, each of which allocates the available processing power to the effects chain in the optimum fashion for the task in hand. For example, the signal chain for the Guitar Multi 1 algorithm includes compression, amp/speaker simulation, EQ, noise suppression, modulation, delay, chorus and reverb. In contrast, the Reverb 1 algorithm contains just EQ, reverb and delay modules (and thus has more processing power available for each module).

Other algorithms include configurations specifically designed for bass, acoustic guitar and keyboard recording, as well as setups for vocoding, voice transformation, lo‑fi processing, RSS (Roland's proprietary 3D audio processing algorithm), microphone modelling and a number of configurations that could be used to process an entire mix. Patches can be sorted by category on the LCD to make patch selection very simple, and editing, though a bit of a 'push‑push‑scroll‑scroll' affair, is also made easier with the use of excellent graphic icons.

It doesn't take long working through the preset patches to become impressed with the big sounds generated by this tiny processor. The range of guitar sounds is good, although the VF1 perhaps lacks some of the flexibility and punch of a dedicated guitar‑amp simulator. The clean guitar sounds are excellent and there is a wide range of overdriven tones (5150 Lead anyone?), though some of the patches with high gain settings were perhaps a little on the noisy side. As a general multi‑effects unit patched into a mixer's effects loop or insert point, the VF1 also does a very good job. All the effects types such as reverb, delay, chorus and EQ are up to the usual Roland standard, and the 24‑bit A‑D/D‑A conversion is very clean.

If the VF1 just provided the basic multi‑effects types to the standard it does, it would probably already represent decent value for money. When you consider all the other sonic options it provides, it would be difficult to argue that the VF1 is not a good deal, especially for guitarists with a basic multitrack system who are looking for a first preamp/multi‑effects unit. Small box, modest price, big sound!

There are better guitar preamps on the market, but the VF1 provides so much more than this that it represents good value for money.