Divinity World Percussion captures the enthusiasm of half a dozen talented world musicians playing a wide variety of percussion instruments, including the hourglass‑shaped Bata double‑headed drum, Darbuka and Djembe goblet drums, the Cajon crate drum (which sounds like a cross between a kick and snare), a couple of frame drums, including the Irish Bodhran, the Tayan Bayan pair of Tablas, the more familiar Congas and Bongos, and shaken percussion such as Maracas, Egg Shakers, Tambourine and Tombourine (a larger, deeper version, with a tom‑drum head), and Remo's unusual Spring Drum, with its thunder and pitch‑shifting effects. 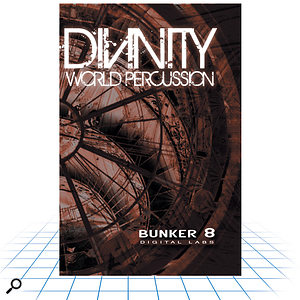 All the recordings are in the stereo 24‑bit/44.1kHz format. It's fairly obvious that the loops were abstracted from long, enjoyable jams, but they've been neatly sorted into folders by instrument, with each loop helpfully given a name that includes its tempo. Most are of individual instruments, although a few are two-player combinations. To give an idea of the scope, there are 240 loops in the first Bata folder, ranging in tempo from 83bpm to 165bpm, 104 in the next Bodhran folder and 177 in the Cajon folder, while the Tayan Bayan contributions amount to a massive 400 loops.

There's lots of inspiring content, and I was taken with the 33 loops inside the Experimental folder, where various drum loops have been heavily treated with a variety of effects such as distortion and echo, to create a completely new ancient/modern feel.

The marketing claim of 'over 6700 loops, hits, and sounds, with over 4.2GB of content' is a little misleading: there's over 4GB on the DVD, but you get a very similar set of around 2300 loops three times over, in Acidized WAV, Apple Loops and REX 2 formats (about 1GB in each format). There's also a selection of kits available in various formats (Ableton Live, Battery 2, EXS24, Reason and Kontakt 2), plus the 159 individual hits used by these kits in WAV format. These are a very useful addition, allowing you to punctuate the loops with your own performances, or create new ones from scratch. Unfortunately, the individual hits are not cleanly recorded (something that should have been easy to do while the instruments were all in the studio). Instead, they use audio chunks snipped from various loops, many of which are chopped off in their prime rather than being allowed to die away naturally. Some even have extraneous sounds, such as knocks and rattles that don't matter in the context of the original loop, but sound odd in isolation.

Sadly, quite a few of the loops also exhibit occasional (but largely inaudible) clipping in the recordings, while others (notably the Tayan Bayan duo) are obviously distorted. Again, it's not the end of the world, and may add to the 'vibe', but it's sloppy. Overall, Divinity World Percussion provides a wealth of useful content — so long as you don't mind a few raw edges.  Martin Walker