Not every audio interface, hand-held recorder, powered PA speaker or preamp is equipped to power condenser microphones. Indeed, some fall short of the P48 phantom power system standard that has been in place worldwide for over 30 years! A 'proper' phantom supply should maintain a nominal 48V (±4V) supply voltage regardless of the current demanded by the connected microphones (up to a 10mA maximum). It's also imperative that the impedance to ground of each side of the balanced audio interface is accurately matched, so as not to affect the interference-rejecting properties of the interface, as well as to prevent any power-supply noise leaking into the audio signal. This requires very tight (better than 0.4 percent) component tolerances in the phantom power feed-in resistors. 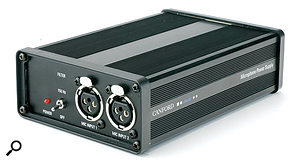 If you're faced with the situation of having no phantom power, or having an inadequate supply, the most practical solution is to employ an outboard phantom-power supply unit. These are available from a number of manufacturers in both mains or battery-powered forms, and in single-, dual-, and eight-channel variants. The Canford Audio's Phantom Power Supply we're looking at here is a simple two-channel unit. I reviewed the mains-powered version, but a battery version, operating from a single 9V PPM battery, is available, and this can also accept an external 9-16V DC supply (not supplied). Both versions are housed in Canford's familiar black, extruded aluminium case, measuring 110x47x170mm (WxHxD). The battery version weighs in at 590g, while the mains-powered model tips the scales at a chunkier 810g.

Both models are equipped with a single toggle switch to introduce 150Hz high-pass filters on both channels simultaneously, which is a very handy feature. The battery version also has an on-off toggle switch and a 'low battery' warning LED, while the mains-powered version has a red LED to indicate when it is powered. Aside from these few operational controls, the front panels of both units also carry a pair of female XLR sockets for the microphone outputs, while the rear panels pass those signals on via a pair of male XLRs. The battery model has a drawer receptacle for the PP3 battery and a coaxial socket for an external supply on the rear panel, while the mains version has an IEC inlet with integral fuseholder.

Both versions comply fully with the DIN EN 61938 standard for P48 phantom power, meaning that they can supply the required maximum 10mA current while maintaining the 48±4V source voltage. The battery-powered version is claimed to run for five hours with an alkaline PP3 battery when supplying one mic with 10mA or two with 5mA — the latter being a fairly typical load with modern microphones — although I wasn't able to verify that myself.

On test, the mains version did exactly what it was supposed to, and passed all my technical tests with flying colours. It is a very solid P48 supply in every sense of that word, and although more expensive than some phantom power supply units, the build quality is immediately obvious. I could find no trace of power-supply noise at all, let alone on the microphone signals passing through the unit, and no measurable effect on the common mode rejection ratio (CMRR) of connected preamps either. If you require a no-fuss, no-worry phantom supply, you won't find better than this. Hugh Robjohns