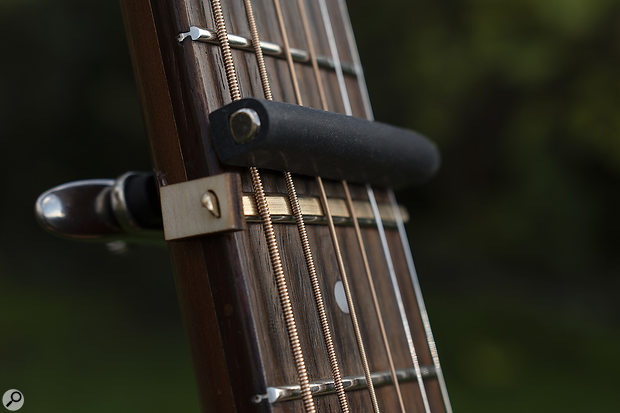 The Capo Elevator is the smallest product I've ever been sent for review, and also the product with the most specific function. The brainchild of Tim Loe, it's designed to counteract a fairly well-known issue that can arise when recording steel-strung acoustic guitars.

Most serious acoustic players, especially those who play in open tunings, make fairly extensive use of capos. However, clamping the strings to the neck with a capo doesn't just raise the pitch of the instrument: it also changes the sound of the 'open' strings, making them sound a little damped and less rich in overtones. In fact, for obvious reasons, it makes them sound less like open strings and more like fretted strings.

This isn't necessarily a bad thing. You don't always want a contrast in sound between open and fretted strings, and some guitarists actually prefer the less 'zingy' sound of capoed strings, to the point where they habitually tune down a semitone in order to use a capo at the first fret. Equally, however, there are times when any reduction in the brilliance of the open strings feels like a loss, and it's for these situations that Tim has invented the Capo Elevator.

Supplied in a neat metal box reminiscent of a tobacco tin, the Elevator is a precisely shaped brass rail that sits on top of and behind the fret, raising it by perhaps half a millimetre or so. It's positioned using a small, detachable wooden handle and held in place by the pressure of the capo itself, which is not included. Most types of capo should work, and I had no problem using the Elevator both with a G7th capo and a more traditional screw-based model. Attaching the Elevator feels a little fiddly at first, but you soon get the hang of it. It is probably best considered a studio-only tool, though, as it adds to the time involved in moving a capo from fret to fret, and would be easy to lose or misalign on a dark stage.

I consistently felt that the sound with the Elevator attached was livelier and less choked.

The Capo Elevator is optimised for a particular fret size and radius, but I don't think this is something to worry about too much unless your guitar is a long way out of the ordinary. My Larrivée OM-3 has an unusually flat fretboard, and although the Elevator was visibly more curved than the frets, it proved flexible enough to sit comfortably in place once the capo was attached.

Does it make a difference? To the feel and intonation of the guitar, none whatsoever, which is as you'd hope. To the sound, yes, albeit a difference that can be subtle and sometimes elusive. I tend to find that there's some variability in the effect of the capo itself, because you never quite attach it the same way twice, and it's quite hard to do reliable A/B tests when you have to remove and reattach it each time. Nevertheless, I consistently felt that the sound with the Elevator attached was livelier and less choked, and this was a difference that was audible both in the room and on recordings. It's not a radical, night-and-day transformation — in the scheme of things, perhaps on the same sort of level as swapping out one small-diaphragm mic for another — but it's one that you probably can't achieve any other way, and which has no negative aspects apart from the additional time and effort involved in attaching the Elevator. This is a highly affordable device that does what it sets out to do, and if the issue that it tackles is one that has ever frustrated you, the relatively small investment seems well worthwhile.