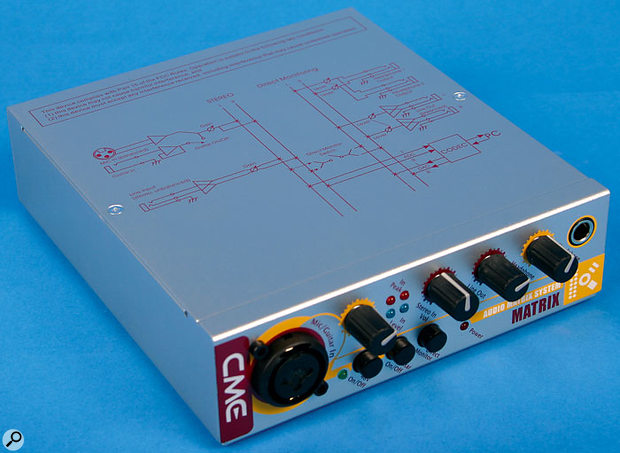 The Matrix K is a low-cost, no-frills computer audio interface designed to do its job simply and efficiently.

The CME Matrix K operates as a computer audio interface, stand-alone audio mixer and preamp. It's intended for the recording and playback of a maximum of two channels at once and has a very basic set of features, but in return it has been priced very reasonably. The product is manufactured by Beijing-based Central Music Company, best known to SOS readers as CME, makers of controller keyboards and small USB-based studio accessories.

The Matrix K comes in two formats, one connecting to the computer using the IEEE 1394 Firewire standard, and the other via USB. The Firewire version costs approximately 30 percent more, but supports sample rates up to 192kHz, whereas the USB version only offers sample rates up to 48kHz. However, both offer 24-bit recording and playback. Both versions work with PCs running Windows XP and Vista, and Apple Macs running OS 10.3.4 and higher.

Measuring just 145mm across, the Matrix has a footprint roughly the size of a piece of A5 paper. As such, it requires very little room and is clearly designed to nestle on a small desk next to a computer. When connected to a PC or Mac, it can derive all the power it needs through the USB or Firewire cable, but where only an unpowered connection is available, or the Matrix K is employed as a stand-alone preamp and mixer, the supplied external power adaptor can be plugged in and used, courtesy of a rear-panel power on/off switch.

All the remaining switches and controls can be found on the front of the unit, the most prominent of these being a combi socket accepting both XLR and quarter-inch jack plugs, although not both at the same time! Obviously, the XLR format is intended for use with microphones, and to help with this, 48V phantom power is supplied when the first of the three front-panel buttons is pressed. Helpfully, a green LED illuminates to show when power is on. The neighbouring button, labelled Guitar On/Off, simply switches the jack part of the combi socket into circuit. This provides a high (2.2MΩ) impedance input suitable for direct connection of electric guitars. The last of the three buttons is used for direct monitoring, and routes the input signals straight to the outputs as well as to the computer. This is useful for when the Matrix is operating independently from a computer as an audio mixer, or to achieve zero-latency monitoring when recording.

A group of four LEDs indicates that audio is being received, the first two lighting green to indicate that signal is present in the left and right channels and the other pair glowing red to warn of clipping. Oddly, these become active only when the Direct Monitor button is engaged, and CME say that you should rely on software metering in other circumstances. The knob positioned closest to the input is the level control for both the XLR and jack inputs. At the far side is the only other connector on the front, a quarter-inch jack headphone socket with its own level knob. The remaining two level controls relate to the stereo inputs and outputs, which are on the back panel.

Also found on the rear is a single USB port and a second headphone feed, this one using the mini-jack format. Like the headphone socket, the stereo input — where keyboards, drum machines and so on, are connected — is a single stereo mini-jack. As a means of input, this is more commonly found on in-built computer soundcards than on semi-professional interfaces, so CME's choice is surprising. The main outs, however, are balanced quarter-inch jacks.

Finally, there's also a laptop Lock hole for connection to a security lead, so that when someone steals your computer they won't forget to take the Matrix with them! Unfortunately there is not MIDI I/O for sequencing, or indeed any digital connections.

Getting the Matrix configured properly on my Windows XP PC was not quite as straightforward as it could have been. The manual (serving both the USB and Firewire Matrix versions) outlines a setup procedure involving the loading of drivers and a dedicated device control panel from a supplied CD-ROM. However, this is actually only for the Firewire version. The USB version is class-compliant, and on the PC, is designed to be used as the default WDM or MME device. Using Cubase LE for testing purposes, I got the Matrix working as an ASIO Multimedia device, but found that I was limited to 16-bit operation. CME suggested downloading a free copy of the ASIO4All v2 driver from the www.asio4all.com web site, so that's what I did. From there on I was able to select these drivers in Cubase's Devices Setup window and then use the Control Panel button below to directly hail ASIO4All's control and setup page, where various latency-compensation and buffer faders are found.

The Matrix K's rear panel accommodates the stereo ins and outs and an additional headphone socket.Using the arrangement described above, the product worked perfectly well. The only other issue, which initially proved confusing, was that the Matrix could not be seen by anything, including the ASIO4All driver, until the USB cable had been re-connected after the PC was up and running. Difficulties like this do seem to be common when using USB.

Operating the device is simple and logical, which is fortunate because the manual is full of badly translated sentences, which are often very comical but not particularly informative, as well as several mistakes. For those with an eye for a schematic, there is one printed on the top of the Matrix, which is helpful for quickly checking the routing when direct monitoring is being used, or when the product is at work in a stand-alone state.

Having a stereo mini-jack input on the rear, rather than two separate balanced quarter-inch jacks, or even a pair of RCA phono ins for that matter, seems like a compromise. I had to delve right to the bottom of my box of leads to find something suitable, indicating how rarely this format is used in the studio. The second headphone output uses the same format, but this is more standard for headphones than it is for stereo inputs.

The technical specification for the FW Matrix shows it to be very slightly better, in terms of performance, than the USB model, but the differences are fairly negligible. For example, the quoted dynamic range of the USB version's digital interface is 95.4dB (A-weighted), whereas the FW manages 97.7dB. My audio tests more or less agreed with these figures, and, indeed, the rest of the specification. As a point of reference, products costing a little more seem to be capable of achieving about 113dB, but given the price of the Matrix K, its statistics are still respectable.

The Matrix demonstrates a detailed high end and a balanced overall sound. If anything, the bass could be a little more defined, but it still has weight. Any noise generated by the device itself is very low, perhaps the only issue being that the headphone amp begins to whine a little irritatingly at higher settings. The mic amp has plenty of level and is of a reasonable quality, handling vocals and acoustic guitar quite well, and there is also more than enough gain to run electric guitars directly. It is also possible to mix either the mic or the guitar jack signal in with the stereo input, should you wish to do so.

Despite its ultra-low price, the Matrix K boasts a very respectable build quality and a decent sonic performance, and the second headphone output is a definite plus point. Having just a mini-jack input on the rear will strike many people as a drawback, but it's not an insurmountable obstacle. More significantly, the K doesn't offer a great number of I/O options, has no settings panel or mixer software of its own, and, unlike many other interfaces, does not include a free audio and MIDI recording package. That said, if a simple and basic audio recording device is all that is required, the Matrix K should do the job well and won't cost the earth.

There are many small computer interfaces on the market, but hardly any Firewire devices that cost as little as the Matrix K — in fact, the Phonic Firefly 302 is pretty much the only competition at this price. To its advantage, the Firefly actually enables up to five audio channels to be recorded simultaneously in certain configurations. On the down side, it does not have a dedicated second headphone output, and the one it does have is quite noisy.

The Matrix K USB faces more competition, from the likes of M-Audio's Mobile Pre USB, but is still one of the most affordable products in its sector of the market.

The Matrix K is a no-nonsense interface that's capable of decent performance, despite costing very little.