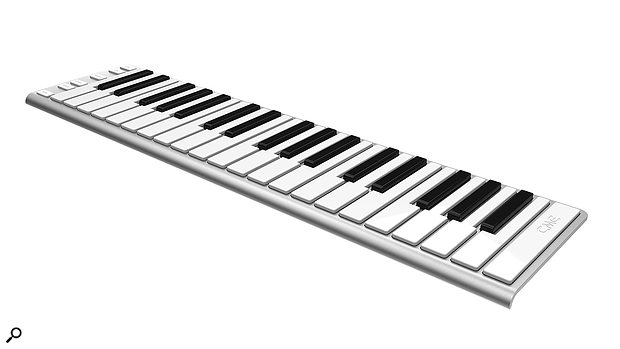 I tested CME’s first Xkey compact keyboard for our March 2014 issue and found it to be not only an “elegant and affordable solution” for the mobile music-making market, but a very playable keyboard in its own right. So much so that I soon began using it as my primary keyboard-data input device. I use the term ‘input device’ because I’m not really much of a keyboard player, and whereas a piano player might find the absence of anything like a pivot action, never mind a weighted action, a little disconcerting, I actually found it liberating and very forgiving of my somewhat limited technique. The short, less than 3mm key travel, and an action that results in the keys depressing in exactly the same way no matter where you press along their length, means you can get around the keys very quickly. The fact that the keys are normal width, however, means you don’t frequently end up with a fistful of wrong notes, as is often the case with compact keyboards featuring miniature keys.

The original 25-note Xkey remains an ideal size for music on the move, as you can fit it in a rucksack or a large laptop bag, and you can operate it on your knees while sat next to someone without getting too antisocial. Using it in a static installation, however, it doesn’t take long before you start hankering after another octave, if only to be able to get your bass notes further away from the rest of your chord voicings.

Obviously, I’m not the only person to have felt this because CME have now launched the Xkey37, which, in addition to an extra octave’s worth of keys, also features a detachable multi-function ‘Xcable’ connector that offers a traditional MIDI output and connections for both sustain and expression pedals. The original Xkey could only connect via USB, with sustain activated by a dedicated keypad — usable, but far from instinctive. The sustain keypad, along with the similarly styled modulation and octave controls, is retained on the Xkey37, so it is still usable in situations where it would be impractical to employ a sustain pedal, but the addition of a traditional MIDI output means you can now use this Xkey with any MIDI sound module, without there having to be a computer involved.

The Xcable breakout lead connects to a dedicated 10-pin custom Xport connector on the left of the keyboard, and splits into two cable-mount, quarter-inch jack sockets for the pedals, and a flying-lead female MIDI socket. If you’re wondering how the Xkey37 gets its power in this mode — the Xkeys are class-compliant, bus-powered devices — there’s a micro-USB socket on the right-hand side that functions just like the one on the original version. If you are not using a computer for data connection, then any USB charger seems to work just fine.

One of the really good features of the original Xkey model was the extent to which you could customise its performance parameters using the Xkey Plus support app. The Xkey models are unusual not only in their keyboard design, but also in that they transmit polyphonic aftertouch (poly pressure) MIDI messages. In the right hands, polyphonic aftertouch can be a great addition to the expressive possibilities of certain synth sounds, but there are many situations where it just adds another data stream whilst conferring no benefit at all. Fortunately, the Xkey Plus app lets you scale poly pressure, delay its onset, or indeed turn it off. You can also scale the velocity response — very useful with just a 3mm key travel — you can change the type of MIDI message sent by individual keys and controls, and also upgrade the firmware (version tested v2.0). All edits made via the app are stored in non-volatile memory, and therefore retained by the Xkey after disconnection.

The new model shares the same elegant ‘Apple keyboard-like’ quality of the original, the larger dimensions seeming only to enhance the clean simplicity of it, despite emphasising the almost implausible thinness of the design! The brushed-aluminium chassis seems to have no structural integrity issues at its new size and would appear to be every bit as robust and reliable as the original has proved to be. So long as you can adapt to the unconventional feel of the keys, the Xkey37 is both a stylish and practical addition to any stage or studio setup.