CME go minimal with their new controller range. But is less really more? 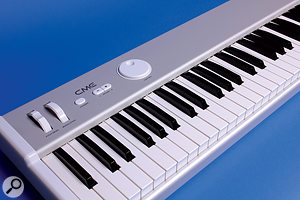 Think of CME master keyboards, and you'll probably think of machines decked out like Christmas trees, bristling with knobs, faders, buttons and LEDs. Somewhat surprisingly, CME's new Z-Key range makes a dramatic U-turn from this paradigm, with what could be described as an 'uncomplicated' approach to MIDI keyboard controllers. The Z-Key range comprises 49-, 61-, 76- and 88-key models, the one on review being the Z-Key 61. All four models are USB bus powered, with the option to use a mains-to-USB converter (not supplied) if you're not using a computer.

The Z-Key is indeed as uncomplicated as it gets, bearing a distinct resemblance to the keyboard that accompanied the Fairlight CMI. The low-profile case is of aluminium, capped by white lacquered plastic end cheeks, feeling sturdy but not too weighty. The top panel is home to only six controls and no display of any kind, leading one to suspect that there is some deeply arcane method of editing the Z-Key's various features. Nothing could be further from the truth: what you see is pretty much exactly what you get.

The rear panel is equally spartan, housing just a USB socket, a single MIDI Out and a socket for a sustain pedal. There is no power switch (the Z-Key fires up as soon as it's connected by USB to a computer) and there are no other sockets for MIDI control pedals.

Returning to the front panel, pitch and modulation wheels are the first controls on offer, briskly followed by a Standby button. This serves solely to mute the MIDI output, the usefulness of which is rather questionable. Octave transpose buttons are next up, providing a shift of plus or minus three octaves — very practical for the small 49-note model, although slightly surplus to requirements on the 76- and 88-note models, giving them a total range that far exceeds the 128 available MIDI notes! There is no semitone transpose function, however, leaving players who have difficulty playing in certain keys somewhat in the lurch. Finally, there is the continuous data dial — useful for re-assigning to different MIDI controllers, you might think, but there's a catch. Despite the promotional literature describing the dial as 'assignable', its function is fixed, sending only CC74. CME refer to this as the 'brightness' control, and indeed CC74 is the standard GM controller for this task. This rather suggests that the Z-Key is intended for domestic use, and not the 'professional' market suggested by CME's promotional blurb. The choice of CC74 is also bizarre: if one were forced to choose only one type of fixed controller, surely the logical choice would be CC7 for volume? If there is a way to assign the dial to other controller values, there is no information at all as to how this is done. The choice of MIDI transmitting channel is a similar fait accompli: the Z-Key transmits only on MIDI channel 1.

The rear panel is the same on all Z-Key models and continues the minimalist theme, featuring just a MIDI input, a sustain-pedal socket and a USB port.

Much of the Z-Key's promotional literature is reserved for the keyboard itself. The Z-Keys are apparently the first keyboard range in the world to be fitted with Zenith piano-style (flat fronted) keys. These are normal piano width but with a shortened front to back scale, with a standard five-octave C-to-C range on the 61-note model. Unusually, the range of the 76-note version spans from A-1 to C6, instead of the E0 to G6 range normally encountered. The Zenith's action is described as semi-weighted, but in reality it's comparable to a very light synth action. CME describe the Zenith as having 'the most comfortable piano-style keys', with a new keybed design for a more consistent action. I found it to be uncomfortably over‑light, with a fairly noisy action, especially from the black notes. Further statements that it feels 'like a real piano' are spurious — it quite patently does not. The velocity response of the review model was very hard to control smoothly, with a tendency to jump from the very lowest velocities straight to the mid-range, and few keys able to reach 127, however hard they were hit. Another curious USP is that because each key is individually mounted, they can be adjusted individually for touch and response. Presumably, such customisation is outside the scope of the end user, unless they are expected to dismantle the Z-Key (invalidating any warranty) and make these modifications themselves with no instructions.

The only other user adjustments possible are a choice of four velocity curves and four aftertouch curves. The method of selecting these is ungainly; the various curves are selected by powering on the Z-Key while holding down specific keys on the keyboard. All well and good, but since there is no power switch, the only way to cycle the power is to unplug the USB cable and reconnect it again. Not such a problem, perhaps, for Macs that don't mind the hot‑plugging of USB devices, but on my PC I discovered that my DAW also had to be shut down and restarted in order to re-reinstate the Z-Key's USB driver in its device list.

Regrettably, there are further gripes; the data dial does not stay on a horizontal plane when pressure is applied while turning it, causing it to lean sideways against its mounting hole on the casing. A small point, perhaps, but it exudes an air of cheapness. Worse still, the review model's modulation wheel is physically misaligned, causing it to scrape against something that it shouldn't be scraping against at the upper end of its travel.

I must admit to being bewildered by the Z-Key — it's unclear exactly to whom it's meant to appeal. Beginners will be disadvantaged by the lack of a semitone transpose function, and professionals would, at the very least, be wanting to specify the function of the one controller provided. Perhaps the Z-Key might find use as a simple additional MIDI controller keyboard in a live setup, although the single fixed MIDI transmission channel and lack of even basic program-change functions severely reduces its usefulness for this task. The Z-Key is also distinctly overpriced when compared to other feature-laden controllers in the same price range, such as Novation's Impulse 61. The mechanical defects do little to inspire confidence, the instrument is under-specified for anything but the most casual use, and it's generally poorly conceived. As much as it grieves me to be so negative, I'd find it hard to recommend the Z-Key in its current incarnation.

There is a large variety of MIDI controller keyboards for under £400 — a comprehensive list would probably be longer than the main text of this review! The following examples are all models coming in at around £300 or less, featuring knobs and sliders for a good range of MIDI control: Novation Impulse 61; M-Audio Axiom Pro 61; Novation Remote 61 SL MkII; Cakewalk A800 Pro. The sub-£200 price bracket also offers several 61-note models with a useful range of MIDI facilities: M-Audio Keystation 61ES; M-Audio Oxygen 61; Behringer U-Control UMX; Miditech 12-Control 61.

CME and Presonus have joined forces to bundle Presonus' Studio One Artist DAW software with the Z-Keys. Studio One is an audio and MIDI music production program, more information on which can be found at www.presonus.com. There was a review of the Pro version in SOS April 2010 (/sos/apr10/articles/studioone.htm).

Despite being relatively compact and portable, the Z-Key suffers from numerous design flaws and omissions, not least of which is the almost total absence of MIDI control facilities. Also, mechanical issues on the review model don't help to inspire confidence in the product.