Billed as "the antidote to harsh and lifeless-sounding digital pedals,” the Analogizer is the latest offering from the ever-inventive boffins at Electro-Harmonix. Beyond the strict technical definition, the term 'analogue' can mean very different things to different people. To some, it's shorthand for a warm, natural sound and unadulterated audio fidelity. To others, 'analogue' means almost the opposite — lo-fi, outdated and of limited use. So to which of these is the Analogizer analogous? The answer, as it turns out, is a bit of both. 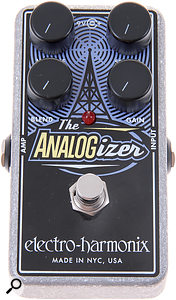 Adopting Electro-Harmonix's now familiar compact pedal format, the Analogizer is equipped with a standard array of fixtures and fittings. Quarter-inch mono input and output jacks are joined by a 9V, centre-negative, Boss-style power adaptor input as an alternative to the 9V battery inside, which is accessed by unscrewing the back of the cast-metal enclosure. A bypass footswitch sits on top of the pedal, along with controls labelled Volume, Spread, Blend and Gain.

The Analogizer is essentially a combination of two effects: a very short analogue delay and an overdrive. The volume knob sets the overall output level, while the gain control sets the amount of overdrive, with a very healthy 26dB of gain available. At lower settings, the gain knob does a good job of gently fattening up the signal without getting overtly dirty. At higher settings, there's some moderate overdrive on offer, with hints of edgy, square-wave distortion on signal peaks.

The spread knob sets the delay time, ranging from 3.5 to 65 milliseconds, and the blend knob sets the delay mix, from no effect to 100 percent wet. There's no feedback control to set the number of repeats — but this delay is not really designed to be used in the normal way... At the maximum delay time (still very brief), you get a short, phasey slap echo, whereas at middling to lower settings the result is a subtle chorus-y thickening of the sound and a general softening and smearing of the note attack.

One of the main functions of the delay circuit, however, is to provide the characteristic treble roll-off imparted by 'bucket bridge' analogue delay chips. It's this, together with a gradual loss of fidelity on each repeat, that gives old analogue delay pedals the dark, atmospheric sound that many guitarists prefer to brighter, clearer digital delays. Even with the spread knob turned right down so there's no audible delay whatsoever, you can still use the delay circuit to effectively smooth out high frequencies in this way.

Unlike the far-out fare we've come to expect from Electro-Harmonix, the effect of this pedal can seem fairly subtle when it's used on its own. It's much more obvious when used in conjunction with other delay or looper pedals. Placed afterwards in the signal chain, the Analogizer adds instant analogue delay character to even the shiniest of digital delays. Placed before, there's fun to be had feeding big, multi-tap delays with a swampy, saturated signal.

Primarily aimed at guitarists, the Analogizer certainly does what it sets out to do. It's a neat idea nicely packaged and sensibly priced, yet this pedal doesn't exactly feel essential. Most modern digital delays already offer some sort of facility for imitating analogue delay sounds (with varying success), and how many guitarists do you know who don't own at least one boost or overdrive pedal?

The Analogizer is a bit of a specialist, then, but it's no worse for it. It's more a modifier that you'd tack on to other pedals than a stand-alone effect, so guitarists with large stomp-box collections and an appetite for experimentation are likely to get the most mileage out of it. The Analogizer could also prove useful to those outside of the six-string fraternity, as it's an effective way to add a bit of grit, warmth and interest to drum machines, samplers and keyboards, especially in a live situation, where sturdy, compact effects with a few simple hands-on controls really come into their own. David Greeves