The exciting thing about sample libraries that use words like 'ambient' and 'soundscape' in their titles is that you just can't predict what they are going to sound like. In the case of Guitar Soundscapes, the promo notes provide some indication, by name-checking Michael Brook, Tyler Bates, Coldplay, Hans Zimmer, Explosions in the Sky, John Murphy and Gustavo Santaolalla — a series of names that collectively suggest a contemporary style leaning towards rock rather than classical. The advertised applications for this library are wide-ranging and include film, trailers, TV, sound design, documentaries, games, commercials and contemporary cinematic and ambient music. The producers even suggest that the lush guitar pads can be incorporated into hit records. 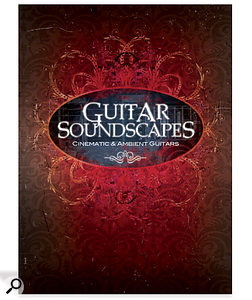 The content is multi-formatted, but to take WAV files as an example, there are 843 of them, amounting to 3.3GB. That material is broken down into 20 construction kits, each of which is headed up by a demo mix showcasing the rest of the content. The files in each kit typically number somewhere between 24 and 30 and are fairly easily identified by their titles. For example, words like delay, feedback, rev (reverse), fuzz, wah and trem (tremolo) indicate what kind of effect has been used, slide and Ebow refer to the guitarist's tools, and everything is identified as being a bridge, chorus, outro, turnaround or verse part.

The collection may be designed to sound very contemporary, but the first kit, with its mix of ping-pong delay and slide work, instantly made me think of Pink Floyd ('Echoes'), while the second and third brought to mind the sounds of U2 and William Orbit respectively. By the time I'd reached kit five, however, I was definitely starting to notice the ubiquitous influence of Coldplay and their trademark wall of shimmering guitar noise. John Murphy's work, such as his score for 28 Days Later, is also an obvious influence on the production team, as is the output of Michael Brook.

Variety may be the spice of life, but it is not a characteristic of Guitar Soundscapes. Generally speaking, the main guitar sounds do not differ greatly from one kit to another, suggesting that a similar setup was used throughout. All the guitars are electric, for example. There certainly hasn't been any attempt to create anything radical or groundbreaking, or even provide a wide range of tempos and textures. What it does do, though, is nail a certain kind of modern, guitar-based soundscape heard extensively in television programmes, advertising and, to a lesser extent, film.

Big Fish Audio insist that real amplifiers and pedals have been used in preference to simulations, but there's no information about how and where they were recorded. The recordings don't have a room sound to speak of and rely on the effect, amp and guitar settings to determine the sound.

Aside from the kits, there is a 1GB folder of extra guitar sound-effects. Freed from having to make the material compatible with other kit elements, the producers have let their hair down just a tad and come up with a variety of stirring effects that will lend themselves to any number of projects. Indeed, large and effective score segments could easily be built by doing little more than arranging some of the files in series.

Guitar Soundscapes may not be the most experimental or varied collection available, but for those hoping to emulate the elite bunch of composers mentioned above, it will be of great interest. Tom Flint