DPA's innovative modular design, combined with diminutive parts, means that the 3521 gets to the parts other mics can't reach...

The DPA Microphones 4000 series of small-diaphragm condenser mics have a long and impressive pedigree. Most classical recording engineers hold the cardioid 4011 and the omnidirectional 4006 in great esteem, and there are also several variations on the theme, with high-voltage, high-headroom versions of both (the 4003 and 4012 respectively), standard and high-voltage versions of a sub-cardioid model (4015 and 4016), and a new, transformerless version of the 4006, the 4006 TL.

It always comes as a surprise to some, but these class-leading microphones are all back-electret designs. Brüel and Kjaer favoured this approach for a number of reasons, and time has proved it to be a wise decision. The fundamental advantage is that the stored static charge produces a voltage between the backplate and diaphragm of around 250V — far higher than most 'true' capacitor mics can achieve. This enables the spacing between backplate and diaphragm to be increased without losing sensitivity, and reduces the ratio of diaphragm movement to overall distance — which translates directly into lower distortion and higher SPL capability. When DPA took over the distribution and service of the B&K 4000-series studio mics, they were still being manufactured in the B&K factory. Today, the cardioid models, which are the more complex to manufacture, are produced in DPA's own factory.

While the original 4000-series mics have served very well, DPA have developed a range of new versions to enable a wider variety of mounting options and applications. These all employ exactly the same 19mm capsules as the standard 4006, 4011 and 4015 (and related models) but house them in very compact bodies with side, rear or detachable cable options. These all have transformerless output electronics and require standard phantom power, and the cables terminate in slightly extended three-pin XLRs.

The 3521 cardioid kit has just been repackaged into a smart new all-in-one case — the review version came in several separate boxes — but the kit contents remain the same. Along with the two 4021 side-cable cardioid capsules and their individual QC calibration charts are a pair of gooseneck brackets with built-in shockmounts, a pair of magnetic bases, a very clever stereo bar, a pair of wire hangers, a pair of surprisingly large foam windshields, an extension rod for the stereo bar, and a separate shockmount used in conjunction with the rod.

The mics themselves are supplied on individual H-shaped plastic cases, cleverly designed to prevent the mic cable from becoming tangled. The connector and capsule plug into the foam centre of the case, and the looped cable is then wound around it: simple and elegant, but immensely practical. 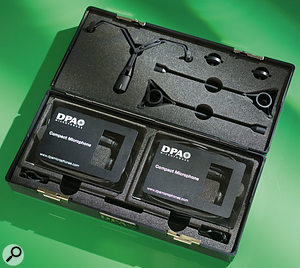 DPA manage to fit the whole set neatly into one carry case. It's easy to see why they call this a compact kit!The gooseneck mounts are 120mm in length, with a simple triangular rubber shockmount supported from a Y-shaped wire bracket. At the base is a 3/8-inch Whitworth thread to fit standard European mic stands, and the mic capsule is simply pushed into the central collar of the rubber shockmount, which grips it very firmly.

The magnetic bases are roughly 26mm in diameter, coated with rubber to prevent scratches, and fitted with a 3/8-inch thread to enable the gooseneck brackets to be fitted. These remarkably strong magnets can easily support the mic mounted on the gooseneck arm. The primary application for the magnetic bases is to enable the mics to be mounted on the iron frame of a grand piano, positioned above the strings on the gooseneck mounts. It works extremely well, providing a secure and very unobtrusive way of close-miking a piano. However, I'm sure plenty of other applications can be found for these neat bases.

The wire hangers are exactly that: a short length of strong, flexible wire, terminated with a corkscrew twist at one end, and a link at the other that wraps around the capsule and clamps it to the wire. The mic cable is then threaded through the corkscrew so that the entire assembly can be suspended from the cable. The wire bracket can be bent as required, to angle the mic appropriately towards the source, particularly handy for drop-mics above choirs and orchestras, or in theatre applications.

The highlight of the support system, though, is undoubtedly the CX04000 Stereo Holder: a stereo bar with a difference. This is shaped like a letter 'W', with the top centre point of the 'W' terminating in a 5/8-inch stand-adaptor (supplied with a 3/8-inch thread insert). The two side arms are equipped with dual mounting positions, with the outer ones catering for the ORTF arrangement and the two inner ones forming a coincident arrangement. The mic capsules are supported in a metal half-circle, which is built into the bracket and locked in place with a clip-on rubber strap. A grooved collar on the capsule ensures a secure and stable fit, and the cables can be dressed neatly along the arms of the bracket.

Also included is a 19mm x 100mm extension rod with a 3/8-inch threaded stud at one end and a socket at the other. This can be inserted into the shockmount, and the stereo bracket fitted to the end, to provide a high degree of mechanical isolation. The shockmount employs a pair of the same kind of triangular rubber mounts as the gooseneck brackets, supported from a circular frame with a 5/8-inch stand adaptor.

So that's the kit of parts — and a very well engineered kit it is too, making it surprisingly quick and easy to rig the microphones for a wide variety of applications. The 4021 back-electret capsule is identical to that in the full-sized 4011 TL model, but the miniaturisation of the impedance converter and line-driving circuitry have imposed some modest restrictions on the technical performance. The frequency response is identical, extending between 40Hz and 20kHz (±2dB), but the sensitivity is roughly 3dB less, at 7mV/Pa, and self-noise is 1dB higher, at 20dB(A). Harmonic distortion is the same, at less than 0.5 percent up to 110dB SPL, and the peak SPL capability is 8dB lower, at 145dB.

The polar response of the 4021 is very tidy and consistent all the way up to 10kHz or higher. The pattern only narrows appreciably at extreme high frequencies, falling 10dB at 20kHz by 50 degrees off-axis. At everything below 10kHz, the polar chart lines are as one all the way around to 130 degrees off axis, which ensures an insignificant level of off-axis coloration. The rear null manages roughly 12dB of attenuation below about 200Hz and above 12kHz, and reaches nearly 30dB at 1.5kHz. 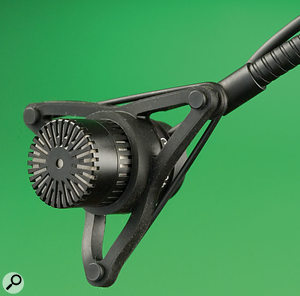 The tiny head and flexible mount allow the 3521 to reach the parts most other mics cannot.A working distance of 30 centimetres (about 12 inches) gives the most uniform bass response, with the proximity effect providing about 12dB of lift below about 100Hz for sources as close as 10 centimetres (four inches). At distances of a metre or more, the bass rolls off gently from about 200Hz, reaching -10dB by about 40Hz. This is all pretty much identical to the standard 4011 microphone, as is the small HF lift above 10kHz, which adds a little sparkle and presence to the sound and is very helpful in distant-miking applications.

I experimented with the 3521 kit on a range of small projects, including small choral and orchestral events, solo piano and acoustic guitar recordings. I was always impressed: the superbly clean and faithful sound quality came as no surprise, as I've used 4011s (and 4006s) on numerous previous occasions, but the convenience and flexibility of these compact models was something of a revelation. In particular, the stereo bar is a delight, providing a very elegant, discreet and lightweight method of mounting the mics. I like the flexibility of being able to configure the mics as ORTF or X-Y pairs. If you acquired a second pair of mics you could have both at the same time, or a very compact surround array with a forward-facing X-Y pair, and a near-spaced rear-facing pair (or vice versa)!

The other mounting arrangements all work well too, and the simple rubber shockmounts appear to be very effective. The magnetic mounts are surprisingly solid and reliable, and I noticed no significant mechanical shock reaching the mics when they were mounted directly on piano frames. If the mics are positioned with care, it is possible to close the lid on a grand piano, too, which can be useful in some live situations.

Although the specs are marginally inferior to the standard 4011 model, I didn't notice any problems at all. The additional 3dB of mic gain is insignificant, and I didn't spot any self-noise or headroom issues — indeed, these mics are amongst the cleanest and most accurate I know, rivalling my favourite Sennheiser MKH-series models.

The 3521 kit is primarily aimed at classical recording and other high-quality acoustic music applications, such as jazz or folk groups — although that's not to say that these mics can't be used in countless other situations too. Although it will seem to be a pretty expensive kit of microphones, it's actually very good value for money. The microphones themselves are amongst the very best small-diaphragm condensers available at any price, and the included accessories provide a very wide range of mounting options, all of which are well engineered and easy to use. This is a kit that will remain in cherished service, still delivering the sonic goods, long after any modern hardware you currently own.

Anyone seeking the highest quality, combined with extreme compactness and versatile mounting should definitely include the 3521 kit in their shortlist — and it will be a very short list of comparable products!

This is a very neat and well-engineered kit of mounting options to support a pair of compact small-diaphragm condenser mics. Based closely on the revered DPA 4011 microphones, the 4021s deliver superb sonic fidelity in every regard. The innovative stereo holder caters for ORTF or X-Y mounting arrangements and is a joy on its own!