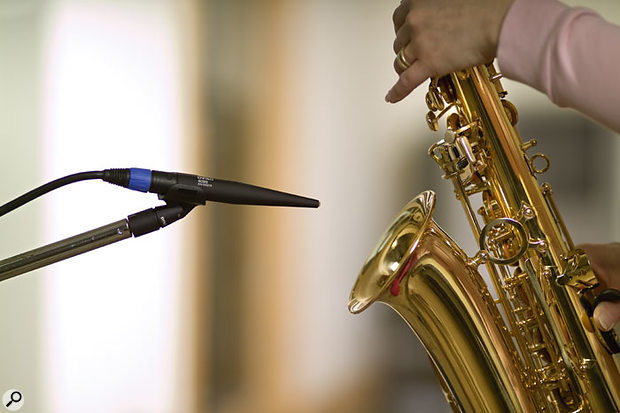 DPA have used their hi-tech miniature microphone capsules to produce a pair of mics that you can use on just about any sound source.

The new DPA 4090-series instrument microphones are very compact omnidirectional mics designed for both studio and live sound applications. They're based on the thoroughly proven and very highly-regarded 4060 series of miniature microphones — the familiar lavalier or personal mics widely used in broadcasting and theatres. Each of the matt-black 4090 microphones is supplied in a smart plastic case with a stand-mount (including a 3/8-inch thread adaptor) and a foam windshield (see page 146). The older 4060 mics have often been used for discreet instrument-miking applications, so adapting the mic to suit this purpose makes a lot of commercial sense.

There are currently two models in the new series: the 4090 and the 4091. The essential difference between them is that the 4091 can handle much higher SPLs than the 4090, but in other respects they are virtually identical.

The microphones measure roughly 123mm in length, and are the same diameter as the XLR connector at one end — about 19mm — narrowing to about 7mm at the capsule. The 4090 model features a gold-coloured protective grille, while the 4091's grille is black — but in both cases the grille and capsule are spring mounted, to afford a degree of protection to the capsule should the microphone be accidentally dropped or hit.

The internal capsule of the 4090 mic is the same as that used in DPA's 4060 miniature microphone — a sophisticated back-electret design with an unusually high self-biasing static charge of about 400V. This rationale behind such a high static charge is that it allows a greater separation between backplate and diaphragm, while maintaining sensitivity. The larger separation reduces distortion with high sound pressure levels (SPLs). In DPA's design, a Teflon coating on the backplate stores the static charge, and careful heat-curing processes performed during manufacturing effectively 'age' the capsule, to ensure a long and consistent life. The days of electret capsules dying after a decade are long gone.

The specs of the 4090 are identical to the 4060; the only real difference is that the instrument microphone is designed to work directly from phantom power. The frequency response is specified as being flat between 20Hz and 20kHz (+/-2dB) and the omnidirectional polar pattern is very tidy, with only the inherent physical shadowing effect of the mic body reducing the rear sensitivity by about 3dB at 10kHz. The output level is a healthy 20mV/Pa and harmonic distortion is below one percent up to 123dB SPL. Peak level clipping occurs at 134dB SPL and self-noise is very respectable for a capsule of this size, at 23dBA (reference 20µPa).

The 4091 microphone employs the DPA 4061 capsule, which allows it to accommodate much higher SPLs, and the specifications vary slightly to reflect this. The output level is 10dB lower at 6mV/Pa, allowing 10dB more headroom to push the clipping level up to 144dB SPL. The self-noise is also 3dB higher, at 26dBA.

Omnidirectional mics have several advantages over cardioids and other directional mics. The bottom end always sounds more natural and more extended, they don't suffer from the proximity effect and they're far less worried by wind blasts and mechanical vibrations transmitted through the stand. The disadvantage, of course, is that they don't discriminate between sounds coming from different directions, which can translate to unwanted spill.

However, one way around the spill problem is to position the microphone closer to the wanted source: the inverse square law of sound propagation means that you can make a big improvement to the ratio between wanted instrument and unwanted spill simply by moving the mic a little closer to the source. This approach can be problematic with directional mics, because the inherent proximity effect gives a disproportionate lift to the low frequencies, but as omnidirectional mics don't suffer from this you can place them very close indeed, to maximise separation without altering the frequency response. Of course, very close miking has its own drawbacks sometimes — particularly because the mic may no longer be able to 'see' the whole instrument, and thus capture an unbalanced representation of it — but no one ever said the art of miking musical instruments was easy! Another advantage of omnis for stage applications is that the polar response remains very uniform in terms of both level and frequency (unlike most directional mics), and this helps to minimise the risk of monitor feedback.

I have used DPA's tiny 4060 mics on numerous occasions, for discreet miking on guitars and in pianos, for example, and always with excellent results. The new 4090 and 4091 are very easy to position because they are so compact, and they look quite elegant and discreet on stage. I found the standard 4090 model easily capable of handling most sources without fear of overloads; it worked very well on acoustic guitars, solo violin and cello, and, in a stereo pair, as overheads on a jazz drum set. For louder sources, such as brass instruments, electric guitar amps and drummers playing in the more aggressive styles, the 4091 is more appropriate. Not only can it handle significantly louder SPLs, removing any fear of clipping, but the lower output level makes interfacing such loud sources with preamps easier too, minimising any risk of running out of headroom. 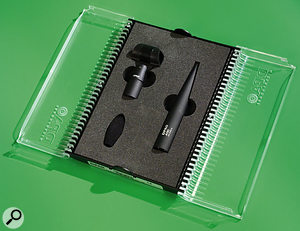 Both mics exhibit the same qualities, though — a very natural, open sound with an extended bandwidth, no hint of any off-axis colorations, excellent dynamics and fast, precise transients. The self-noise of a mic is related to the size of its diaphragm and, as the diaphragm in the 4090 and 4091 is tiny, the kinds of medium-distance placements that might be favoured with large- or even small-diaphragm condensers don't really suit it. The increased gain necessitated by miking from a greater distance tends to expose the higher self-noise. However, move the mic in close, as intended, and the increased level of the source quickly overcomes any worries about the mic's self-noise.

I found that the 4090 could be positioned within two inches of an acoustic guitar's strings, to achieve a superb degree of separation between instrument and band spill, and although some experimentation is required to find the optimum position for a properly balanced sound, the result was punchy, dynamic, detailed and very usable. A pair of 4090s as overheads above a drum set, with the 4091 in the kick drum, produced a very natural and crisp jazz-style drum sound too.

As a high-quality and very versatile instrument mic, the 4090 is hard to beat, with the 4091 coming into play for the loudest of sound sources. Omnidirectional mics may not be very fashionable (many potential users fear a lack of separation), but with thoughtful application there are many practical and sonic advantages to the use of omnis, and the 4090 and 4091 make it easy to become hooked on this approach. I definitely recommend trying out these neat little mics for studio and stage applications where quality is paramount.

There are few direct alternatives to the DPA 4090 and 4091 mics, at least in terms of physical size. Earthworks produce several ranges of very small diaphragm omnidirectional mics that offer similar performance — the SR and TC series, for example — but they are all longer and slightly larger than these DPA offerings. The only other comparable option would be to use a standard miniature 'tie-clip' omni mic, which would be less elegant but should provide similar performance and ease of placement. A wider range of alternatives then emerge from the likes of Sennheiser, Sony, Beyerdynamic, Countryman Associates and, of course, DPA's own 4060-series mics (like the 4061, pictured below), on which the 4090 and 4091 are based.

The 4090-series mics are capable of capturing a very natural and detailed representation of a wide range of musical instruments, while being easy to place close to the source to maximise separation. These compact omnidirectional electret microphones set the standard for this advanced technology.