If recording piano is your forté, this system could make your life a whole lot easier... 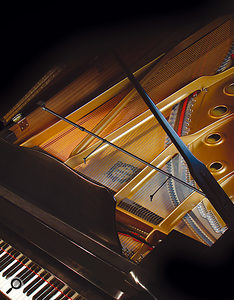 Recording a piano is, arguably, more of a challenge than recording any other instrument, and the options are almost limitless, as Mike Senior demonstrated in his excellent article in SOS January 2008 ('Piano Recording: All You Need To Know To Capture A Great Acoustic Piano Sound'). But recording a grand piano with other musicians performing around it is even harder, because of the problem of keeping spill out of the piano mics. There are many possible approaches, but Earthworks have introduced a new option: the PM40 PianoMic System. This features the company's 'random–incidence high–definition microphones' in a very elegant and versatile dedicated miking system.

I have to admit that I laughed out loud when I unpacked the shipping box. The PianoMic system is supplied in a lovely aluminium flightcase, but as it measures some four feet long by six inches square, it looks like something a deluxe bazooka would come in: walking into any gig venue carrying this case is definitely going to attract 'amusing' comments from onlookers!

Inside the case, supported in the sculpted foam liner, is an interface box and the PianoMic tube construction, which is fitted with a pair of permanently attached omnidirectional mics on flexible goosenecks. It's all very simple, very elegant, very obvious and very easy to install, connect and use. The telescopic tubes are adjusted using simple clutches, so that the L-shaped hangers at each end span the piano-case sides, and then the mics can be positioned as necessary by bending the goosenecks. (The hanger plates have a soft coating to protect the piano woodwork, and additional foam pads are provided, which can be used to prevent the hanger plates vibrating between frame and lid). Finally, the cable is dressed neatly out of the piano and the interface box plugged into a pair of XLR cables in the conventional way. Fitting the PianoMic takes a couple of minutes at most, and the lid can be fully closed and blankets draped over the top, without having to fiddle around with microphone stands. In stage applications this ensures that the piano looks clean and tidy without the clutter of mic stands, and in studio applications it makes it practical to leave the piano miked up at all times. The interface box can be mounted discreetly on a piano leg using the supplied leather pouch and Velcro straps, or alternatively the box can be screwed to the piano itself, or to a mic-stand adaptor plate using a pair of L-brackets included in the kit

Earthworks have a reputation for high-bandwidth, high-quality miniature microphones, and that's what they've integrated into the PianoMic system. The omni capsules have a quoted frequency response of 9Hz to 40kHz (no amplitude limits are given), a healthy sensitivity of 15mV/Pa, and a self-noise figure of 22dBA. This relatively high figure is common in small capsule microphones. Standard 48V phantom power is required, from which the PianoMic draws a very thirsty 10mA of current, and the mics can accommodate a maximum of 148dB SPL — so sitting close to the piano strings shouldn't present any problem at all. Being omnidirectional, there's no proximity effect to worry about, of course.

The whole tube and mic assembly weighs just 350 grams (the interface box is double that weight) and comprises three tubes: a central section carrying the mics, plus extending end sections. At its shortest setting, the overall length is 117cm (46 inches), but it can be extended to a maximum of 162cm (64 inches). In addition to accommodating even the widest of pianos, the design enables the mic pair in the central section to be positioned to favour the higher or lower strings over about an eight–inch range (in most cases). Although the two mics have a fixed spacing on the central tube, they're supported from 12cm (4.75 inch) goosenecks, and these provide a lot of positioning flexibility in all three planes. A single cable exits the tube at one end and terminates in a five-pin XLR plug for connection to the interface unit. This cable needs to be dressed carefully as it exits the piano to ensure that it doesn't get pinched and damaged when the lid is closed. For channel identification, the two mics are clearly numbered on their capsule heads and on their corresponding XLR outputs on the interface box.

The bulk of the unobtrusive PM40 design is taken up by its lightweight mounting system. The omni mics themselves are tiny.

The PianoMic system is very easy to install single-handed, and the mics can be positioned with considerable flexibility. The goosenecks appear to be well designed: I'm told that there won't be any problems with drooping over time or with heavy use, and they certainly stayed where I put them during the review period. The heavy phantom-power current requirement could challenge some mic preamps, especially those in bus-powered computer interfaces, but it wasn't a problem for the Focusrite ISA mic preamps I was using for the review.

Positioning the PianoMic isn't quite as intuitive as it would at first appear, essentially because of the omnidirectional capsules being used. Almost all conventional close-miking techniques for pianos rely on directional mics, and if you place omnis in the same positions the sound will inherently be somewhat disappointing. To try to avoid that kind of error, Earthworks includes a glossy leaflet advising some recommended positions, and the comprehensive and very readable user manual also includes suggested starting points. Following that advice, my initial tests were performed with the capsules more or less central across the piano frame, spaced about three inches in front of the hammers and about three inches above the strings. This gave a very acceptable sound for typical pop and rock applications, and would be usable in an amplified classical situation too. It was bright, crisp and detailed, with a powerful bass and an airy top end. The stereo imaging was also nicely spread and defined. Closing the lid resulted in a significant change, as you would expect, making the sound more mid-prominent and closed-in — but a little EQ helped to balance the sound out very well, and given the surprising level of isolation from external sounds, the compromise was well worth it. Moving the bar further back (or turning the bar around) to place the mics further away from the hammers changed the character of the piano, reducing both the attack and the mechanical noises, which would suit some applications. Similarly, moving the mics towards the bass or high strings provided a useful variation in tonality, and it is very quick and easy to make positional adjustments. Given the close proximity of mic capsules and strings, the signal-noise ratio isn't troubled by the relatively high self-noise of the sub-miniature capsules used in this design, even with the gentlest of players and repertoire.

The Piano Mic is a well-engineered and well-designed product that delivers high-quality, reliable results in a convenient and elegant package. It is easy to use and delivers the goods. At this price, the PM40 is a very serious investment — especially since it can't be used for anything other than miking up pianos: there are other stereo mic kits with facilities for piano miking, but which provide far greater flexibility by allowing the mics to be used for other applications (such as DPA's 3521 kit, for example, which is significantly cheaper). Nevertheless, for anyone who needs a high-quality, discreet product for miking grand pianos in live sound situations, this neat solution deserves serious consideration.

About seven years ago, an American company called Slider Products produced the Piano Barre, which I use regularly. It works in a similar way to the PianoMic and comprises extending square-section aluminium tubes with thin end-bars to span the piano case, with adjustable standard mic-thread fixings to attach a pair of mics and position them above the piano strings. An optional clamp replaces the end bar at one end to ensure the assembly can't tip over under the weight of the mics. It's not as elegant or compact as the Earthworks solution, but it was considerably less expensive, and any convenient microphones can be used with it. Sadly, a quick Internet search suggests the company are no longer trading, but second-hand examples might appear in the usual places occasionally.

The DPA 3521 kit that's mentioned in the main part of this review comprises a pair of miniature 4021 cardioid capsules, along with an assortment of mounting hardware including a clever stereo bar, cable hangers, goosenecks and magnetic bases — the latter being ideal for installing the mics inside a piano very discreetly. The 3552 kit includes the same hardware with a pair of 4051 omnidirectional capsules. These kits are significantly less expensive than the PianoMic, the mic self-noise figures are better, and the mics can be used in countless other applications. The hardware allows considerable flexibility in positioning the mics within the piano, and the lid can be closed — but it is not possible to replicate the PianoMic positions, or to install the mics as quickly.

A very elegant and well-engineered solution to installing high-quality mics inside a grand piano.