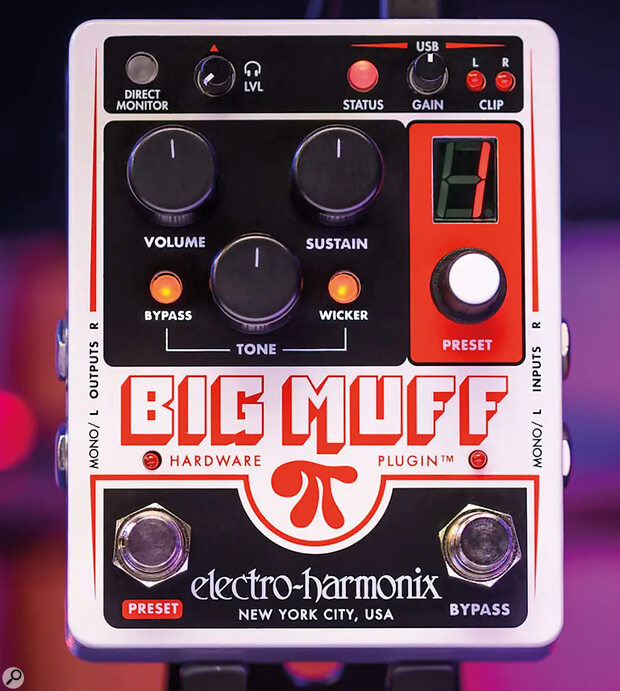 Want to use a real Big Muff Pi in your DAW session? With this one, you can just plug and go...

Ah, the Big Muff. First released in 1971 (though there are rumours of prototypes being used a couple of years prior to that, including by Hendrix), this venerable harmonic distortion pedal has since been resized, reissued, redesigned and reimagined in more ways than we can count. There’s the Op Amp Big Muff Pi, the Ram’s Head Big Muff Pi, the Germanium 4 Big Muff Pi, the Triangle Big Muff Pi... and many more besides. I won’t list the full range here, for the sake of my poor editor’s sanity, but suffice it to say that the Big Muff is to EHX what Star Wars is to Disney; so long as there’s interest, new iterations will keep on coming. 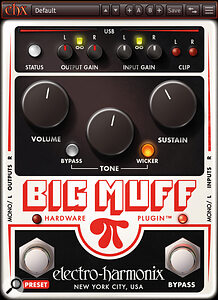 As well as changing settings, the plug‑in routes audio to and from the pedal, and allows you to transfer up to 10 presets to the hardware.So where could EHX take it next? Into your DAW is where. The Big Muff Pi Hardware Plugin (let’s shorten that to BMPHP...) does exactly that, with no need to bother your existing audio interface. It remains a physical pedal and can still be used in the traditional way, but it connects to your Windows (32‑ or 64‑bit) or Mac machine via USB. When you do so, not only are its settings editable and recallable using a DAW plug‑in, but the plug‑in actually routes the digital audio signal out to the pedal, through its D‑A converters, then through the pedal’s physical transistors and clipping diodes, before being converted back into ones and zeros and returning to the plug‑in in your DAW. The idea is that you can patch this hardware box into your DAW session anywhere there’s an insert slot.

EHX describe the BMPHP as “a new type of product that transcends the limitations of traditional DAW plug‑ins to bring the unique qualities of analogue sound to digital recording”. We’ve already seen some high‑end studio gear explore this territory (McDSP’s APB system, for instance), but it’s certainly the first time I’ve seen it in a guitar pedal and I’d tend to agree that this qualifies the BMPHP as a genuinely novel product. Potentially, it’s one that could pave the way for some future classic designs too. EHX have taken an admirable risk here, then — but has it paid off? Let’s find out...

The BMPHP is very much a Big Muff and can be used as a regular hardware pedal, just like all the others. Roughly the same size as the Little Big Muff, it’s based on the 1973 Violet Ram’s Head Big Muff, a classic in the EHX canon, and has the series’ familiar layout of Volume, Tone and Sustain knobs. Buttons for Tone Wicker and tone‑circuit bypass are added, along with a Preset encoder with a seven‑segment display and a second Preset footswitch. At the very top are:...