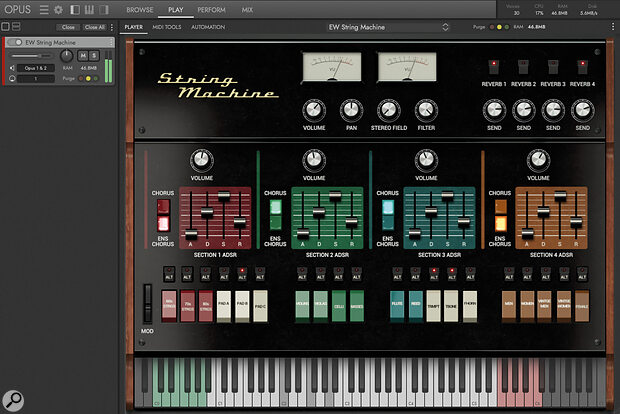 EastWest give the classic string machine sound a modern twist.

While the heyday of the original string machine keyboards before they were overtaken by rapid advances in synthesizer technology was relatively brief, the sound quickly achieved classic status. Of course, secondhand, you can still buy an original ARP Solina String Ensemble or Roland RS‑202, for example, providing you have the budget (and perhaps technical skills to keep it working). However, while there are more accessible modern takes on the string machine concept in a hardware format (including Behringer’s upcoming Solina recreation), for most potential users, the virtual route is both more affordable and practical. EastWest are the latest of the virtual instrument/sample library big guns to tempt us on this front. So, if you want the classic string synthesizer sound in a convenient virtual format, is EastWest’s String Machine a creditable contender?

The string machine concept represented a somewhat transitional instrument sitting between the original compact electric organ and the birth of the ‘modern’ synthesizer. Space precludes a history lesson but, if you would like some further background, Gordon Reid’s May 2007 article on the Eminent 310 would make a good starting point.

What is worth noting here, however, is that the rich, warm emulation of a string section that these instruments produced can be heard on some truly iconic recordings by a Who’s Who of artists, composers and producers. Originally, it may have simply been the convenience of using a single keyboard instrument in a pop song context to avoid the need (and expense) of recording an actual string section but, eventually, the sound became a thing in its own right and, whether it’s on classic pop, disco or funk songs, prog‑rock masterpieces or genre‑defining sci‑fi film scores, the string machine undoubtedly made its mark.

EastWest’s virtual take on the concept is simply titled String Machine. It runs within their Opus engine and is available as a one‑time purchase or included within the ComposerCloud+ subscription model for both new and existing subscribers. As can be seen in the main screenshot, the UI pays homage to the look of original hardware units, with chunky rocker‑style buttons to switch on each of the core sounds (you can layer as many, or as few, of these as you want within a preset) and virtual faders for the various ADSR controls. I’ve no strong preference when it comes to skeuomorphism in software emulations of devices that have their origins in real objects but, in this case, I think it makes lots of sense; it all feels very tactile and almost anyone could start using String Machine without needing to consult the PDF manual.

However, the UI also hints at EastWest’s design decision to blend some sonic evolution into the feature set. The sounds available to the user are split into four colour‑coded sections. The first of these (in red) provides the ’60s, ’70s and ’80s ‘string machine’ sounds and some associated pads. The other three sections add somewhat more modern string (green), woodwind/brass (light blue) and vocal/choir (orange) sounds that can be blended into the mix. Across each sound section, the instruments feature some deep sampling, with the mod wheel providing global control to blend between different dynamic layers for each sound. The Alt button above each main sound’s rocker switch provides access to an alternative sample set in each case. Within the string machine section, the Alt switches access different sounds, while within the modern string, woodwind/brass and vocal/choir sections, you are toggling between vibrato or non‑vibrato samples. Note mapping for each currently active instrument is shown on the virtual keyboard display using colour‑coding and with overlapping zones shown in white.

Modulation was a big part of the original string synth sound and that’s reflected here with Chorus and Ensemble Chorus buttons available for each section. You can engage either or both within each section to vary the intensity of the effect. You can also engage any combination of the four styles of reverb on offer and adjust the global send to each of them. The main UI also offers global Volume, Pan, Stereo Field (adjusts the stereo width of the sound) and Filter knobs. The last of these controls the global filter cutoff (linked to CC11) and is a very obvious candidate for automation while you are playing.

As mentioned, in use, this main control set is very intuitive and, while string machines are not designed to offer every synthesized sound under the sun (the emphasis was always on quality over quantity), String Machine’s ability to blend both the classic with the more modern makes it possible to create a pretty diverse range of sounds. In addition, if you do want to dig deeper, the Opus Mix panel lets you do just that, with access to a more comprehensive set of mix console settings, and individual reverb sends for each instrument section and to the individual effects. This includes the global filter where you can choose between different filter types and access additional controls such as resonance and drive, all of which can be automated.

Creating your own blends of the available sounds is a simple as clicking on the required combination of rocker (and Alt) switches, while the colour‑coding of the keyboard lets you see the range over which each section can be triggered.

My only personal encounter with an original Solina was both brief and many years ago so I’ll resist making a direct comparison to String Machine’s hardware roots. However, I’m more than happy to confirm it (a) is absolutely in the right sonic ballpark compared to those classic pop/prog songs and film scores that established the original string machines as a sonic favourite and (b) any comparisons aside, it sounds fabulous in its own right.

Whether used individually or layered in some combination, the vintage ’60s, ’70s and ’80s string machine sounds, plus the three associated pads (and, of course, the Alt version of all six), provide plenty of ways to change up the classic string machine sound. The two chorus options add further analogue richness to the sonic plot and the overall impression is warm, full (lots of convincing bottom end if you want it) and very ‘analogue’ in nature. And, while the streamlined UI is a pleasure to use, it is worth dipping into the Opus Mix panel for the Auto Filter’s Drive control if you want to big things up even further; it’s very effective.

EastWest have nailed the classic string machine sounds, added some excellent modern tonal options, and wrapped it all up in a UI that has almost no learning curve.

However, the inclusion of the more modern string, woodwind/brass and vocal/choir samples is a very clever idea and considerably expands the palette of textures you can create. For example, blending options from within the ‘modern’ strings with the vintage string sounds can add some very attractive additional textures and, at higher levels within the blend, the modern strings bring an extra definition to the overall sound; it’s a beautiful combination. The choir/vocal sounds are also particularly impressive and blend really well with both vintage and modern strings; if you want to get truly epic in a film score, this is certainly one way to achieve it. These more modern textures can also be used on their own and are just as effective.

Of course, for those craving classic string machine sounds in software, String Machine is not the only option. For example, Arturia’s Solina V is an impressive alternative. It is more obviously emulating specific hardware and is build around modelled synthesis rather than sample‑based technology. It offers a number of useful modern extras under the hood but perhaps doesn’t offer the diversity of tonal options EastWest have built into String Machine. IK Multimedia’s Syntronik, like String Machine, is built around sample‑based technology, and also offers Solina‑esque tones in its String Box module. There are others...

However, the bottom line here is that String Machine is both a pleasure to use and sonically impressive. By not limiting themselves to a faithful reproduction of the feature set of a specific hardware original, EastWest have made something considerably more versatile. It authentically captures the fabulous character of ‘that’ sound, but it also offers much more. Combined with the convenience of the virtual instrument format, it’s a very appealing prospect.

If you are a current ComposerCloud+ subscriber, String Machine is automatically added to your subscription; just download and enjoy. If you have been tempted by the ComposerCloud+ route, then String Machine is simply another reason why it provides incredible value for money. For those who prefer a one‑off purchase, String Machine’s price is perhaps outside the ‘casual’ bracket for most potential users (although, at the time of writing, the introductory discount was still in place). That said, sonically, String Machine is top‑notch and working producers and media composers will absolutely love what it has to offer. EastWest have nailed the classic string machine sounds, added some excellent modern tonal options, and wrapped it all up in a UI that has almost no learning curve. If you have the budget, it’s undoubtedly a winning combination.

EastWest have captured the classic string machine sound in an authentic fashion and given it added versatility with the blend of more modern tones. String Machine sounds fabulous and is also a pleasure to use.

£209 including VAT, or via ComposerCloud+ subscription.