This stompbox aims to put the sound of classic analogue synths at guitarists’ feet.

The Electro-Harmonix (EHX) Synth 9 is the latest in the company’s ‘9’ range of guitar pedals — we’ve seen them model tonewheel organs, electric pianos and a Mellotron, previously. This latest toy is dedicated to turning a regular electric guitar into a polyphonic analogue synth. It follows the same ‘four knobs, one dial and one footswitch’ control paradigm of the previous pedals in the series: the first two knobs adjust the dry and ‘synth’ output levels, and the last two vary in function according to the preset that’s selected via the nine-position dial. There are separate outputs, one for the synth/dry mix, as set by the controls, and one for the dry-only sound. An Electro-Harmonix 9.6DC-200BI power supply is included, and there’s no battery power option. 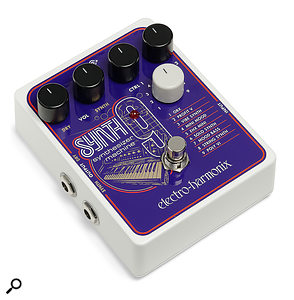 I’ve been more than impressed by the previous ‘9’ pedals, and particularly so by the authenticity of the organ and Mellotron emulations. However, if you read my reviews of those, you’ll know that I still felt that to get the best out of them you needed to put a compressor pedal in front. Well, it seems that the Synth 9 has a compressor built in, making it very sensitive while still retaining plenty of dynamic control. As with all the pedals in the range, the Synth 9 works best coming before any delay, modulation or distortion pedals, and in this case it would not be advisable to put another compressor before it — that would make it too sensitive. For the most reliable guitar-to-synth translation, it’s recommended to use the guitar’s treble pickup and keep the volume turned up fairly high. The usable tracking range extends up to around the 23rd fret on the high E-string of a standard guitar, and down to the open A-string on a bass.

The presets are based on the sounds of nine classic analogue synths, and the names give a strong clue as to which models: OBX, Profit V, Vibe Synth, Mini Mood, EHX Mini, Solo Synth, Mood Bass, String Synth and Poly VI. One exception to the basic level control protocol is the Mini Mood preset, which somehow manages to include a portamento effect. When this is selected, the Synth volume knob controls the non-portamento synthesizer level, while Ctrl 1 controls the volume of the portamento synthesizer.

Preset one, OBX, generates the fat, rich sound we’ve come to expect from its muse, with Ctrl 1 adjusting the filter brightness and Ctrl 2 operating as an octave selector, over a four-octave range. Preset two, Profit V, sees Ctrl 1 adjusting the rate of a downward-sweeping filter envelope, and Ctrl 2 scrolling through eight octave or fifth intervals. At number three is Vibe Synth, described as a poly synth endowed with decaying harmonic content and vibrato. Here Ctrl 1 adjusts the filter sweep while Ctrl 2 adjusts both vibrato rate and depth at the same time.

Preset four, Mini Mood, is designed to produce a fat Moog-style sound by blending two synth engines, one monophonic with portamento and one polyphonic without. Ctrl 1 adjusts the output volume of the portamento notes and Ctrl 2 sets the portamento glide time. This mode sounds most effective on mono lines played in an unhurried manner. In fact this portamento voice appears to use a more traditional form of pitch tracking and as such is the most susceptible to tracking problems if the playing isn’t clean. I also heard occasional pops and thumps at the starts of notes on the portamento voice. As far as I can tell, all the other synth waveforms are derived from processing the guitar’s output signal, so the only pitch tracking involved there relates to the filters. Providing the guitar is in tune, all the ‘normal’ synth voices behave very well.

Preset five is actually an emulation of one of EHX’s own instruments, the Mini Synth, and for this model Ctrl 1 sets both the filter envelope sweep time and direction, and Ctrl 2 selects between four octaves. If you need a synth that goes ‘Zweeee’, this is the one! Preset six, Solo Synth, can be played almost like fuzz guitar, giving it a bit of a Roland GR500 vibe — the poly sounds were created using a separate fuzz circuit for each string. This patch combines ‘oscillator’ and fuzz guitar waveforms, and Ctrl 1 looks after the tone while Ctrl 2 selects between four octaves. Mood Bass comes in at number seven on the dial to deliver a Taurus-like bass sound, with Ctrl 1 adjusting the sweep-down time of the filter and Ctrl 2 selecting between three octaves. Number eight I like a lot, as it produces a very credible string pad, apparently modelled after ARP sounds. Ctrl 1 handles brightness and Ctrl 2 the filter sweep attack time. Finally there’s Poly VI, reminiscent of Korg’s Polysix. For this, Ctrl 1 is again a tone control, and Ctrl 2 adjusts the modulation depth.

As with the previous pedals, the Synth 9 feels very immediate to play, with no sense of disconnect between the guitar and the sounds being generated other than for the portamento voice on preset four. That requires a little care and restraint, and even then those odd thumps put in an occasional appearance. That built-in compressor does make the Synth 9 quite sensitive though, so if you find that just touching the strings generates unwanted sounds, try backing off the guitar volume slightly. This is most noticeable on guitars with powerful humbuckers.

I have to say that the synth sounds are very convincing, but also they’ve clearly — and very sensibly — been chosen to feel comfortable to the guitar player. The sounds respond well to playing intensity, and unless you’re a very messy player, there are no significant tracking issues — as long as the guitar is in tune! As with all synth sounds, they work best through a full-range amp but most are quite acceptable played via a guitar amp if that’s your only option. A Boss SY300 can serve up a similar range of sounds with the added benefit of in-built effects and programmability, but at less than half the price of that, and with absolutely no learning curve to climb, the Synth 9 offers rather more instant gratification.

Other EHX pedals in this range give the guitarist different keyboards sounds. Elsewhere, the Boss SY300 probably comes closest in concept. In the studio, Jam Origin’s MIDI Guitar software is also a great way to control virtual instruments from a standard guitar.