Eowave’s Ribbon 2 combines a 12-bit synth and a ribbon controller in 24-inches of plexiglass.

The Eowave Ribbon 2 is a lightweight synth and CV/USB controller suitable for analogue hardware synths or in-the-box softies. Its circuitry is embedded in clear plexiglass and although the manual points out that it is “not a lightsabre”, the Ribbon 2 lights up rather fetchingly thanks to an integral RGB LED.

You’re given intuitive finger control over pitch or selected synth parameters, but the Ribbon 2 differs from comparable designs by its inclusion of an internal 12-bit sound engine complete with 16 user-programmable patches. It can therefore be treated either as an addition to your existing performance rig or as a complete instrument in its own right.

The Ribbon 2’s power is supplied via a Mini USB cable, so you’ll either need to run it permanently connected to a computer or source a 5V phone charger or similar. When connected to a PC or Mac (or iOS device) it operates in class-compliant MIDI mode and dispenses notes, CCs and pitch-bend according to its configuration. A stereo mini-jack is the sole connector for both audio and CV duties, so in the case of the latter you’ll need to dig out a splitter lead if you’re to effectively route the CV signals to your modular, etc.

In its USB MIDI mode, the 50cm ribbon ordinarily offers a playing span of approximately four octaves, with a series of circular markings spread like frets to mark out the note intervals. To my soft and work-shy fingers, the ribbon’s papery surface felt rather rough and cheap, at least compared to my adjacent Doepfer ribbon which is completely smooth and frictionless.

The Eowave’s tactile pad, with its golden squiggly lines, uses a resistive technology that interacts with your body — to the extent that you might obtain a markedly different response when, for example, playing barefoot. Both the ribbon position (pitch) and the tactile pad output are available as separate CVs but the ribbon pressure — used to control the volume of the internal synth — is only accessible as a MIDI CC (over USB). Unfortunately, regular five-pin MIDI is not part of the Ribbon 2’s spec.

Selection of the 16 internal patches is a simple up/down process involving a couple of small buttons, the only concessions to conventional mechanical operation.

Straight from the factory, the internal patches are a varied bunch, featuring the expected smooth, theremin-like sine sweeps and glissando square waves, to gnarly sound effects and ring mod-type freakishness. Since there’s no way for you to know initially whether the patch you select should act as a synth patch or CV source, the factory sounds are grouped by colour. When the Ribbon 2 lights in blue it typically means it’s acting as a monophonic synth and when it goes red, you’ll need to remove it from your mixer and treat the outputs as synth CV sources instead. Specifically, CV1 is the tip and carries the ribbon’s output, its range fixed at 0-5V. CV2, the ring, is typically used to trigger an envelope.

Once you start editing and compiling your own patches, it’s easy to deviate from the colour scheme and really confuse yourself, since the editor allows each of the 16 internal patches to have its own RGB values — very pretty! Incidentally, the green component of the review model’s LED was a weak lime colour and pretty easily swamped by blue or red. A deep, Roland Aira green was therefore sadly unattainable. 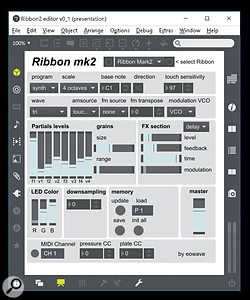 The Ribbon 2 editor software.Playing the ribbon, whether you use the visual note cues or not, is surprisingly easy. If you’ve ever spent any time trying to master the theremin, you’ll appreciate being able to fly directly to a note with confidence, achieve vibrato with a gentle wiggle of the finger and even play staccato with a similar technique to a Trautonium. The linear scaling is simple and predictable, and if it seems like cheating to quantise the notes into semitones, this is something you can decide on a per-patch basis too.

The 12-bit internal synth is reasonably flexible and while it doesn’t compare to, say, a Moog Theremini for depth and complexity, it does feature an additive synthesis engine, amplitude and frequency modulation (with pressure control over the depth), plus a built-in delay. To get the best out of all this synthesis, you’ll need to run the editor — this in turn requires you to download and install Max Runtime, which is free and quite straightforward. I wouldn’t rate the editor as the slickest example of the species as it hung occasionally (on my Windows 10 laptop) for no reason I could ever work out. But for tweaking the 16 presets and uploading your personalised sounds into the hardware, it’s actually quite serviceable. If you cock up or lose a patch you like, all the factory patches can be restored at any time later using the ‘Init all’ process.

Using the editor you can invert the ribbon direction, switch to ‘pitch-bend mode’, adjust the touch sensitivity and so on. Pitch-bend mode requires that you set an appropriate range on your receiving soft synth, after which the Ribbon 2 employs a base note combined with pitch-bend events to sweep to the pitch required. Alternatively, you can switch from the regular four octaves to ‘full scale’, giving the ribbon an almost unmanageable 7-bit note range.

Each time you make a tweak you need to click ‘update’ in order to record your changes in one of the internal memories, but other than that, and the occasional glitch, the process worked as expected. The synthesis is never difficult to grasp and restricts the user to only a limited number of parameters for performance control. You begin by choosing a raw waveform from saw, square, triangle and sine, or more exotic options such as noise, pitched noise, additive synthesis, bell and grain. Either the touch-plate or ribbon pressure can be employed to add amplitude or frequency modulation, giving the Ribbon 2 a wider scope than regular theremin imitators. If you select additive or bell synthesis, the eight partial levels become active and are then drafted in to refine the base sound somewhat. Most unusual of all, ‘grains’ is a basic but nifty granular playback engine ideal for more experimental, chattering tones. Admittedly some kind of resonant filter model or reverb effect would have been welcome to broaden the appeal but the inclusion of a synth is not to be sniffed at — it turns the Ribbon 2 into far more than a mere controller.

A single effect is included — delay — and it’s well worth having for spooking up those spacey theremin impressions and sound effects. The delay features level, feedback, time and modulation, and here I’d have loved to have seen pressure or touch-plate control over its parameters to bring it to life a little more. Still, at least you can specify different delay settings in each patch.

The Ribbon 2 is a neat combination of 12-bit synth and CV/USB controller and, as such, can fulfil a far wider variety of roles than had it been simply one or the other. Whether you set it up to deliver the eerie and pure tones of a theremin, a Clangers slide whistle or more unusual sounds such as pitched noise, bells and granular weirdness, it can be an entertaining synth all by itself. I realise its role as a lightsabre has been prohibited, but the colour-coded patching is a brilliant assistant for giving your patches instant recognition, at least in low light.

It’s a bit of a shame the CV outputs are confined to a single stereo mini-jack, especially given the unit is capable of transmitting ribbon position, aftertouch and touchplate pressure at the same time over USB. Still, as the Ribbon 2 can be used to control PC, Mac, Linux and iOS soft synths, there are numerous ways to incorporate it into your music-making, in or out of the box. The Eowave Ribbon 2 is compact, affordable and whole lot of finger-swooping fun.

The Doepfer R2M is similarly-priced but features a separate control unit used to program it. Functionally it differs by offering two CV outputs plus a Gate out as well as five-pin MIDI, but it lacks USB. (The supplied USB cable is used for communication between the ribbon and control unit but cannot be used for direct USB connection to a computer.) Unlike the Eowave, the Doepfer has no markings for use as pitch guidelines, nor does it have a built-in synth. Otherwise, Moog’s Theremini could be an option to consider. Its internal synth is lots of fun and even if you have to learn to wave your hands in the air rather than stroke your finger across a desk, it’s easier to play than a regular theremin and even has a built-in speaker.

A stylish ribbon controller for CV/USB synths with a built-in 12-bit synth for stand-alone operation, the Eowave 2 offers a direct, tactile means of adding performance control to analogue hardware or USB-accessed software synths