These new condenser and dynamic microphones boast classy retro styling, but how do they sound?

These two new microphones from Electrovoice are clearly an attempt to pander to the craze for all things vintage looking, but I have to admit that the solid engineering and distinctive styling of these mics are definitely seductive. Although neither mic is blue, they form part of the EVBlue range — Electrovoice are part of the Telex group, and Telex recently acquired BLUE microphones, so these are evidently a 'BLUE meets classic Electrovoice' design, as the styling combines elements of both lines. 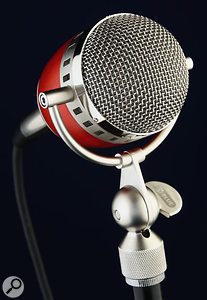 Both models offer a fixed-cardioid pickup pattern and both are designed to work live and in the studio, the main difference between the two models being that the Raven is a dynamic microphone, while the Cardinal is a capacitor model requiring standard phantom power for its operation. There is no fancy packaging or flightcase, but the microphones do come with little velvet bags that can be fastened by means of a drawstring.

Oddly, for such professional-looking microphones, the vintage-style information sheets that accompany them provide no technical specifications other than a smoothed frequency response curve and a polar diagram plot at 100Hz, 500Hz, 1kHz and 8kHz. A trawl of the Electrovoice and Telex web sites produced no further technical details, so I had to email them directly for answers to my technical questions.

The Raven is a dynamic cardioid microphone designed for both vocal and instrument use, and its retro-design body is short and stubby, with the balanced XLR output at the back and in the centre of a stepped section in the casework. An integrated swivel mount provides freedom of movement, but with sufficient friction to keep the mic in place, and this in turn incorporates a swivel standmount with a thumbscrew clamping arrangement. This is secure enough, but larger wings on the thumbscrew would have made it more comfortable to tighten. The mount is finished in what appears to be a satin chrome or nickel plate, while the mesh grille and grille-retaining ring are bright chromed. Tiny screws secure the grille-retaining ring, and removing them appears to provide the only means of access to the microphone. A mic stand thread adaptor is thoughtfully included. 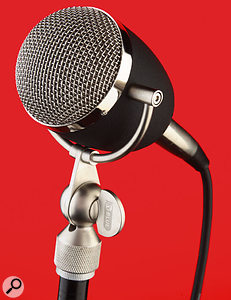 The Electrovoice Raven dynamic microphone.Photo: Mike CameronBecause all cardioid microphones exhibit some degree of proximity effect, which boosts low frequencies when the mic is used close to the sound source, the response of the mic has been engineered to drop away gradually — just a few decibels between 800Hz and 50Hz. Below 50Hz the roll-off is far more rapid. As with most vocal mics of this kind, the frequency response isn't designed to be flat and honest, but rather to give good speech intelligibility, and to this end there's a subtle presence hump at around 5kHz and another peak at around 12kHz before the response falls away towards 16kHz or so, which is pretty much the upper limit for this model.

While the Raven is suitably attired in matt-black paintwork, the Cardinal comes resplendent in a lustrous red wood-grain finish, though I didn't take my penknife to the mic to check if the finish was real wood or not! The overall shape of the microphone is the same as that of the Raven, but with a further slotted ring behind the capsule-retaining ring. The stepped section to the rear of the microphone is also picked out on satin silver rather than being the same colour as the body. Exactly the same swivel mechanism is used for mounting, and the weight is approximately the same as for the Raven.

Being a capacitor microphone, the Cardinal has greater high-end extension than the Raven, but the designers have also left out the gentle low-end roll-off, and instead given the response a little hump at 70-80Hz before the low end finally drops away. The high end is characterised by a presence hump at around 3.5kHz, with a secondary hump at around 7.5kHz before the high end falls away towards 20kHz. From the graph, it appears that the high-end response is maintained up to 15-16kHz before dropping gently, ending up at around -10dB at 20kHz. 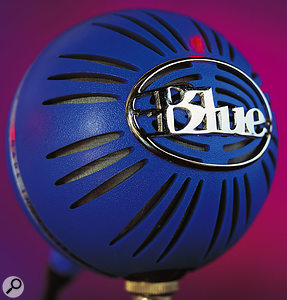 Photo: Mike CameronThese are quite difficult mics to suggest alternatives for, as part of their attraction is their distinctive styling. The BLUE Ball mics would be worth looking at, as both dynamic and capacitor models are offered. If appearance isn't an issue, then for live use I'd suggest the Beyer Opus 81, Sennheiser E865, LD Systems D1011, and Samson C05 as alternatives to the Cardinal. There's also that old Standby the AKG C1000S, which is at home live or in the studio. These are all handheld capacitor or back-electret mics, and so are suitable for live as well as studio use.

Dynamic alternatives to the Raven are equally numerous, with the usual suspects of the Shure SM57 and SM58 or their Beta equivalents coming close to the top of the list within a similar UK price range. For studio work, the same alternatives would work fine, as well as similarly priced models from AKG, Sennheiser, and Beyerdynamic.

Taking the Raven first, this turned out to be a little more sensitive than the other dynamic mics I compared it with, and it had a strong, confident sound that cut through well without seeming unduly abrasive. Off-axis rejection is excellent, but it isn't so tight that the slightest movement of the singer relative to the mic changes the level or tonality to an alarming extent, as some hypercardioids tend to do. In fact the only reservation I have about the Raven is that it tends to be rather more susceptible to popping than most dedicated live vocal mics, so in the studio you'd be better off using it with a pop shield. This is no problem if you use the mic for instruments, of course, and because of its low profile and ease of positioning, I can see the Raven making a good tom mic. In live situations, I'd be more concerned about its proclivity to popping, as even using the high-pass filter in my mixer didn't prevent it altogether, and if your popping drives the mixer into clipping, the result can sound pretty dire.

Switching to the Cardinal revealed a more open, more detailed sound, but with plenty of low-end warmth, much after the style of more conventional-looking large-diaphragm studio microphones. It is more sensitive than the Raven, as you'd expect, but not as sensitive as some studio mics. This is probably deliberate, so that in a live situation there isn't a massive difference in level between the dynamic and capacitor models. Again, the off-axis rejection is impressive and the proneness to popping is no worse than for the Raven, which is surprising for a capacitor microphone. In the studio it would still need a pop screen for vocals, of course, but on stage it should be OK as long as you don't work too closely to it. Because of its extended frequency response and solid low end, it would also make a good general-purpose instrument microphone for stage or studio, particularly for hand percussion and acoustic guitars.

I like both the styling and sound of these microphones, and their UK pricing is also sensible. The popping issue would worry me a little in a live vocal situation, but this can be dealt with in the studio using a pop shield, and the mics are versatile enough to handle various instrument-miking jobs. Their physical shape is both eye-catching and practical when it comes to getting into awkward places — the mounting arrangement helps you go where longer mics may fear to tread. If you're in the market for something that's beautifully engineered, impressively stylish, and sounds good to boot, then these two mics are well worth a closer look.

These mics provide great looks and good sound quality, marred only by a susceptibility to popping when used close up. This isn't an issue in the studio where pop shields are routinely used, but could be a problem in some live setups.