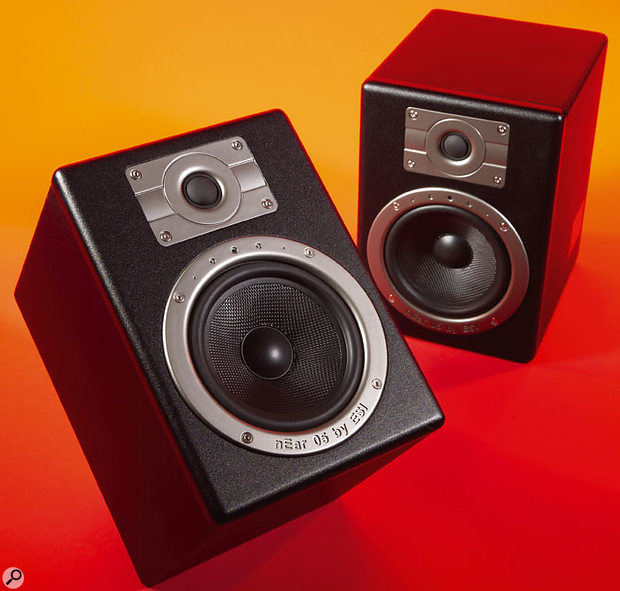 Boasting a serious sound at a very affordable price point, these new monitors should win many friends.

When I'm asked what active monitors I can recommend in the UK for under £250, it's always a tough call, because there's not much choice that far down the food chain. However, ESI may be set to change all that with their new Near05, which turns in a very creditable performance. This little monitor measures only 250 x 166 x 200mm and combines a five-inch, woven-Kevlar-coned woofer with a one-inch silk-domed tweeter in a ported enclosure. The woofer uses a roll-rubber surround and has a high-temperature voice coil to allow it to withstand extended use at reasonably high SPLs.

A 40W power amplifier drives the woofer, while the tweeter is generously catered for by a 30W amplifier, the entire package weighing a manageable 5kg. The fourth-order (24dB/octave) crossover point is set at 3.2kHz, and a system response of 60Hz-22kHz is quoted (presumably these are the -3dB points, but this is not made clear), though there's no figure for the maximum SPL. Subsonic filters and output-stage current limiting protect the drivers, while radio-frequency filters stop excessively high frequencies from getting through the amplifiers. Note that the port is on the rear panel, the advantage being that any air noise from the port is reduced at the normal listening position, but you do have to ensure you leave adequate space between the port and the nearest wall in order for the monitor to work correctly. If you set it up too close to the wall, you could lose bass end. 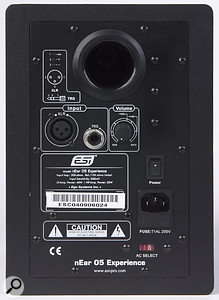 Although made from vinyl-laminated MDF, the cabinets look chunky and sophisticated, due largely to the prominently styled speaker mounting flanges and the round-edged baffle. As is usual, the metal rear panel houses all the necessary connectors and doubles as a heat sink. An IEC mains inlet and rocker switch look after the power, while the input is doubled up on both balanced XLRs and quarter-inch jacks to provide a choice of connection methods. There are no EQ controls on these monitors, just input level trims. A blue LED set into the woofer surround indicates that the speakers are powered up, though one of these died on the review model in a brief moment of incandescent glory shortly after it was switched on! Apparently ESI Pro have not encountered this problem before, and it didn't affect the audio performance in any way, but it was still mildly irritating.

With a speaker this size, you don't expect a lot of low end, but the Near05 does better than expected on this score. The bass isn't overblown, but at moderate listening levels you get an adequate sense of depth, albeit less than from large-scale monitors. However, where these monitors really score for me is that they have a very nicely focused, detailed sound with good stereo imaging and the ability to discriminate between similar-sounding instruments. Having a modest bass end helps in this respect, but, whatever the reason, flaws in your mixes show up just as clearly as your strokes of genius. Playing some old 'remastered for CD' material really showed up the rough edges, while better-recorded material sounded squeaky clean — which is what I'd expect from any speaker designed for monitoring. The soft-dome tweeter resolves high-frequency detail smoothly but incisively, so that you can listen for long periods without feeling fatigued.

The Near05 is clearly aimed at the project-studio market, but its sonic abilities make it suitable for the more serious home studio owner, while its compact size is a bonus in situations where space is scarce. If you're into mixing dance music, you probably won't find that the Near05 delivers enough weight at the low end, but for general musical applications it works well enough for tracking and mixing. There is apparently a matched SW10K powered subwoofer available, and that could turn the Near 05s into a formidable full-range monitoring system.

In a nearfield situation, the speakers go loud enough and stay clean enough for realistic mix evaluations. Given their low UK cost, their clarity and tonal balance is excellent, and though they lack the deep-down punch of larger monitors, they exhibit better bass extension than most speakers of this size. If your budget ceiling really is this low, then I can't think of any better way to spend your money.

There are very few monitors that I'd recommend for project-studio use in this UK price range, but provided that you don't expect massive bass extension and PA-like SPLs, there are some gems to be found. The Tapco S5s which I reviewed back in SOS February 2004, put in a very creditable performance for such a small, low-cost speaker. However, where the budget permits I would be inclined to go for something slightly larger, if just for the greater bass extension larger speakers usually produce. If your budget or desk space won't stretch any further, though, you should add the Fostex PM05s to your short list, as the manufacturer's whole PM range offers a good combination of sound quality and value.

As compact active nearfield speakers go, this one offers all the essentials at a bargain UK price.