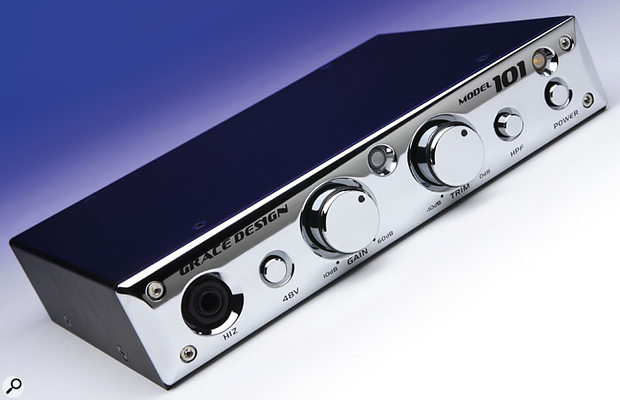 Some mic preamps are renowned for their flattery of the recorded signal, but this new high-spec single-channel unit proudly aspires to cleanliness and neutrality, translating the character of your performances and microphones with the utmost fidelity.

US company Grace Design, based in Boulder City Colorado, are probably better known in professional circles for their Model 801 eight-channel and 201 two-channel microphone preamps, but in order to appeal to the more budget-conscious project-studio owner who tends to track things one part at a time, they've now launched a single-channel version. Packaged in a half-width 1U metal case, the Model 101 is distinguished by its curved, mirror-finish chromed front panel with matching chromed knobs. These have rubber 'O'-rings set into them, making them easy to operate without slipping. The unit is beautifully styled, and this already goes a long way to making it look worth its substantial price tag, even before you've heard what it can do!

Power comes from an external 6V adaptor, which is the only 'less than professional' aspect of this piece of hardware — the PSU isn't even labelled as belonging to the Model 101, so it is likely to get mixed up with the other 20 or 30 wall-warts found in a typical studio. On the plus side, getting the power transformer out of the rack box makes it easier for the designers to minimise hum pollution. As you'd expect, there's a balanced mic input on an XLR (on the rear panel) plus balanced XLR and balanced jack outputs. Both XLRs feature gold pins to eliminate tarnishing, and both outputs can be used at the same time, which may be useful when hooking up a zero-latency source-monitoring path. When using the output unbalanced, the cold pin should be left floating rather than being grounded.

The design features exceptionally clean phantom powering (but with no status LED) switchable from the front panel, while the gain is switchable in 11 discrete 5dB steps from 10dB to 60dB. There's also a high-impedance instrument jack on the front panel (unusually this is balanced, though it can be used unbalanced), and when this is being used the gain range extends from -10dB to 40dB. A special high-gain version of the Model 101 with 10dB more gain is available for those using ribbon microphones. The gain switch uses silver contacts for reliable, low-distortion operation, and a continuously variable conductive-plastic Trim control allows the output to be attenuated by up to 10dB. For the best signal-to-noise ratio, this should be used at or near to its maximum setting where possible.

In addition to the phantom-power button, there's a switch for a 75Hz 12dB/octave high-pass filter, as well as a simple level meter based around a multi-colour LED in the centre of the front panel. As most users will hook the Model 101 into a DAW system of some kind, the accurate metering can be done there to ensure that optimum level is being fed into the converters. That leaves just a power button and its associated status LED, which I felt the designers could also have made dual colour to show when the phantom power is active.

One interesting aspect of the Model 101 is the use of transimpedance amplifier circuitry. The design, which makes extensive use of surface-mount components, features a transformerless input, and uses no electrolytic capacitors in the signal path, as these can cause audio nonlinearities.

As to the term 'transimpedance', that describes an amplifier circuit that is similar to the conventional operational amplifier (which can be an integrated circuit or be made from discrete components) except that the signal source is connected directly to the input rather than via a series resistor. What this means is that the gain is worked out as the feedback resistor value divided by the input current, rather than being the ratio of input resistor plus source impedance to feedback resistor, making this a current-sensing input rather than a traditional voltage amplifier.

The advantage of this approach is that it should adapt well to microphones of varying impedance, but the caveat is that the design of any transimpedance amplifier has to be balanced very carefully to prevent it from becoming unstable as a result of input capacitance. The engineers at Grace have clearly got this problem nailed, as their design has a frequency response that would make many radio transmitters jealous! The exact bandwidth of any amplifier depends on how much gain is being applied, but at a typical mic gain of 40dB, the response extends from 12Hz-170kHz, and at lower gain settings can exceed 400kHz. Clearly nobody can hear anything remotely that high, but designing the amplifier this way gives it a very flat phase response within the audio band, and ensures that transients are not compromised.

When it comes to noise, that depends on the impedance of the connected source and ranges from -124dB for a 600 Ohms source to better than -130dB for a 50 Ohms source. With a typical mic impedance of 150 Ohms), the Equivalent Input Noise is -128dB. The distortion figures are also exceptionally good with the 'distortion plus noise' figure coming out at better than 0.001 percent for 20dB of gain and better than 0.005 percent for 60dB of gain, measured with a +20dBu output. A maximum output level of +25dBu is available before clipping, so there's plenty of level to drive even the most insensitive converters. 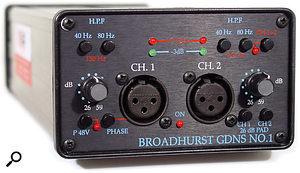 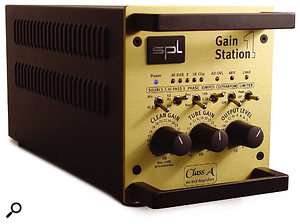 Photo: Mike Cameron If you're considering the Grace Design preamps, there are a few other units you might want to look at within a similar price range. However, few offer such a transparent, uncoloured sound. The nearest we've tried is probably the DAV Electronics BG1 single-channel solid-state preamp (reviewed SOS December 2003). Alternatively, there's also the SPL Gold Mike (reviewed SOS June 1999) which, despite its hybrid tube circuitry, has a subjectively clean and classy sound.

For something more traditional, try the SPL Gain Station (reviewed SOS April 2004) or the tube-based Brick from Groove Tubes. Essentially the Model 101 resides at the more affordable end of the 'exotic' spectrum, so that's probably the best place to look for alternatives. However, don't rule out cheaper options such as units from TL Audio and the Focusrite Platinum range, as some of these perform extremely well and in many project studios the recording environment has more of an effect on the sound than the precise choice of preamp.

As I'd expected from the technical description, the Grace Model 101 exhibits no discernible coloration, and it is just as quiet as it promises to be. I did some tests with a Sennheiser MKH20 microphone, as it is extremely quiet. There's a little audible hiss at the maximum gain setting, but no more than you'd expect. Even at close to maximum gain the noise is gratifyingly low, and with typical capacitor mics you rarely need anything like maximum gain. In any typical application the noise can be considered negligible, and in many instances the mic electronics are likely to contribute more noise than this preamp. The metering LED flashes green when the input exceeds -20dBu, and turns red at +16dBu leaving 9dB or so of headroom prior to clipping.

If you plug in a neutral mic, you get a neutral sound, whereas if you plug in a mic with character, you can be certain that the character you're hearing is entirely due to the microphone, and is not being influenced by the preamp. Because of this, you'll probably be able to hear more differences between the mics in your collection than with a less transparent mic preamp. This tonal honesty may not always be what you want, but when comparing against lesser preamps, listening through the Model 101 is somewhat like putting on reading glasses — everything becomes much more detailed and 'right' sounding.

As an instrument DI, the Model 101 also performs very well, and here the generous headroom really helps, as guitar pickups can output very high initial transients. On its own, the DI'd result isn't particularly exciting, but it gives a clean, responsive sound that makes an ideal feed for software modelling amplifiers or for sending guitar/bass signals over long distances to an amplifier in a remote live room when you're playing in the control room.

If you yearn for a preamp that will flatter your sound or add some kind of magical character, this unit probably isn't for you, but if you want your mics to deliver their true sound in a clean, quiet electrical environment, then the Grace Design Model 101 delivers true high-end performance at a mid-market UK price. Admittedly, what you do get is very basic by way of facilities, especially in the metering department, but there's nothing to complain about in the signal-path department, and the available headroom should be enough to keep even the most casual user out of trouble. To get the best out of a preamp like this one, you need to choose mics with low self-noise, and you also need to pay attention to your recording environment to ensure that it is free from significant room coloration and extraneous noise. If you can provide that, then the Model 101 will reward you with a beautifully focused sound where nothing is misrepresented or suppressed.

The Grace Design Model 101 is a no-frills, very clean mic preamp with a good pedigree. It also makes a fine instrument DI box, but although sensibly priced for a piece of equipment of this quality, it still represents a substantial investment for the non-professional.