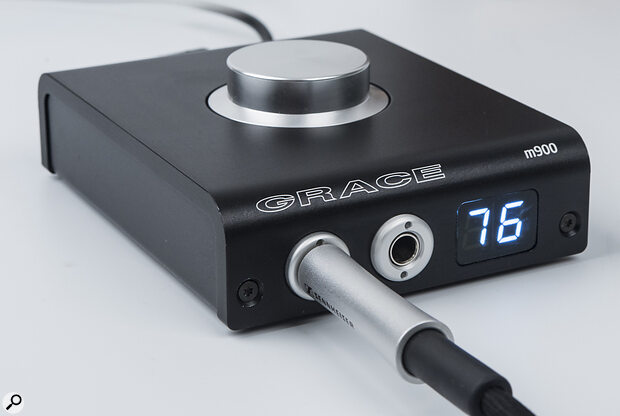 We check out Grace’s compact, mastering‑quality solution for monitoring on the move.

I have used an ancient m902 reference headphone amplifier pretty much every day for years and, although it has long since been superseded and surpassed by the m903 and then the m920, it still delivers a dependably high level of performance. However, Grace moved away from the half‑rack form factor employed in these models several years ago and, while the remote‑controlled arrangement of the m905 and m908 monitor controllers is great for professional studio applications, it doesn’t lend itself either to portable professional applications or the high‑end hi‑fi fraternity in the same way that those half‑rack models did so well.

To meet those users’ requirements, Grace Design introduced an extraordinarily compact headphone amp, DAC (digital‑to‑analogue converter) and monitor controller called the m900. This unique product actually started life at the behest of Massdrop (now just Drop, a user community and retail site). Massdrop asked Grace Design to develop an audiophile headphone amp and DAC with a similar sound quality to the m920 but at a much lower price tag and with fewer facilities. The resulting product, the m9xx, was sold exclusively through MassDrop for two years. Afterwards, Grace Design revisited the product, adding a coaxial S/PDIF input and, later, extra monitoring functionality and this revised model was renamed and relaunched in 2017 as the m900 — but I’ve only recently got my hands and ears on one!

This delightfully elegant unit measures just 101 x 133 x 46 mm4 x 5.25 x 1.8 inches but weighs a reassuringly hefty 466 grams, meaning it stays on the desk where you place it! A large polished aluminium knob on the top surface operates a lightweight, detented endless encoder with a press‑switch action.

Dual quarter‑inch headphone sockets on the front panel are wired in parallel, but only the right‑hand one mutes the rear panel line outputs when a plug is inserted (there’s no panel inscription to denote this feature). A two‑character alphanumeric LED display indicates either the listening volume or various configuration options. Around the back, a trio of RCA‑phono sockets provide unbalanced analogue, line‑level, stereo outputs, and a coaxial S/PDIF input (supporting sample rates up to 192kHz).

There’s also a Toslink port for optical S/PDIF signals (up to 96kHz), and two micro‑USB connectors with the first accepting an asynchronous audio connection from a computer (PCM sample rates up to 384kHz, plus DSD at standard rates between 64x and 256x). The second socket is purely for the supplied high‑current wall‑wart mains power unit (100‑240V AC, ground‑free, with interchangeable mains plug plates). A pair of USB 2.0 type‑A to micro‑USB cables are also included with the m900. The m900 can be USB bus‑powered but this forces ‘low‑power’ operation which reduces the maximum line‑level and headphone power outputs (see 'Power Modes' box). Connecting the external supply allows a ‘high‑power’ mode, increasing the maximum output levels particularly for the headphone amplifier.

Both Class‑1 and Class‑2 USB modes are available, the former allowing driverless use with both Mac and Windows PCs at sample rates up to 96kHz. Its asynchronous transfer means the m900’s converter runs on its internal clock, negating any USB jitter. USB Class 2 allows operation up to 384kHz (and DSD) without drivers under Mac OS, but for Windows machines an Xmos driver (from the Grace Design website) must be installed.

The m900 is essentially a plug‑and‑play device, the silver knob normally controlling volume, but holding the knob depressed for two seconds accesses the 11 configurable options. Perhaps the most important of these is choosing the required audio input (USB, Toslink or Coaxial S/PDIF). Others set the USB class, the ‘dimmer mode’ (which actually turns the display off after five seconds of inactivity, and the Crossfeed option (see the 'Crossfeed' box). The ‘power‑up level’ can also be altered from the factory default (volume at zero/mute on power‑up) to any preferred reference level instead, and the stereo balance can be adjusted by ±6dB. If required, the incoming sample rate can be interrogated, with some slightly cryptic displays for the quad, octal, and DSD rates.

Four different D‑A reconstruction filter options are available, having either sharp or slow roll‑offs and linear‑ or minimum‑phase responses. Selection is entirely a personal preference as they each have different sonic virtues and drawbacks, depending on the audio material.

Additional modes are included to listen to normal (L/R) or reverse (R/L) stereo, left channel feeding both outputs, right channel to both, and muted left or right channels. A summed‑mono option is partnered by my beloved ‘stereo difference’ (or ‘left‑minus‑right’) mode, and both include ‑6dB attenuation to maintain headroom. Many much more expensive professional monitor controllers lack these basic, yet incredibly useful, functions — so bravo Grace Design!

The output level is indicated in half‑decibel increments on the LED display by numbers from 0 (silence) to 99 (max) for whole decibels, and a full stop for the 0.5dB steps. Although most of the attenuation work is performed in the digital domain, the gain of the analogue circuitry is also altered in two stages to minimise the noise floor and optimise headroom at any given volume setting. Output muting is achieved by pressing the volume knob briefly (the display dims and pulses as a warning), with a second press restoring the signal.

I found the m900’s Crossfeed function to be noticeably better than that on my old m902.

Although the m900 doesn’t have balanced line outputs, I didn’t have any problems connecting to active balanced‑input monitors using simple ‘bodge’ cables. Something that caught me out, though, was that the Crossfeed function applies to both the headphone and the rear line outputs (see 'Crossfeed' box). The m902 and its successors applied Crossfeed only to the headphone outputs, but the simplified architecture of the m900’s means a single audio signal path feeds both the headphone and line outputs. Inevitably, loudspeaker stereo imaging is noticeably degraded if Crossfeed is active. That said, on headphones I found the m900’s Crossfeed function to be noticeably better than that on my old m902, with a stronger, fuller‑sounding and more convincing effect.

Another potential ‘trap’ explained in the first‑rate user‑manual is that plugging headphones in/out while music is playing can create a brief short circuit, triggering the unit’s self‑protection circuitry to shut down the internal power supply, mute the outputs, and display ‘OC’ (over‑current). As soon as the short is removed (by unplugging the headphones) normal service is resumed, but Grace advise muting the unit manually before connecting/disconnecting headphones, which is easy enough.

With its extensive monitoring functionality the m900 makes a great, high‑quality, compact monitor controller for any system. But it would be appreciated most when working on location with a laptop. The volume knob makes it a more practical (and pleasingly tactile) solution than compact USB DACs like Dragonflys and their ilk; I’ve always preferred a physical hardware volume control over an on‑screen virtual alternative.

It almost goes without saying that the audio quality is excellent via the line outputs, with plenty of drive for most applications in both power modes. The headphone amplifier is also easily of ‘mastering quality’ but, like most portable headphone amps, the m900 is definitely happiest when driving low‑impedance headphones. I found headphones under about 100Ω worked best, with 32Ω seeming to be the optimum choice — especially when bus‑powered — and I’d recommend avoiding headphones above 250Ω.

Without doubt the m900 is an excellent DAC/ headphone amp/ monitor controller, and I was genuinely surprised to discover how affordable it is given the superb sound quality and facilities. Its technical performance, monitoring versatility, compact size and sheer practicality make it an absolute delight, and I recommend it highly!

The rear panel hosts unbalanced line outputs, coaxial and optical S/PDIF inputs, and USB ports for power and interfacing. The m900 can be bus‑powered but is capable of higher levels when plugged into a separate mains supply.

The m900 can be powered via a USB audio connection or from an external mains PSU. However, the limited current available from typical USB ports forces the unit to operate in a ‘low‑power’ mode, whereby the maximum line‑level output at the rear RCA‑phono sockets is +16.3dBu (5.1 Volts rms). While this is more than enough for typical hi‑fi systems and even most pro monitoring system requirements, the headphone power levels are also reduced to the point that some insensitive or high‑impedance headphones might struggle.

Powered from the wall‑wart via the second USB port, the two‑amp supply enables the ‘high‑power’ mode, raising the output level to +17.7dBu (6V rms) at the rear, and virtually quadrupling the power available to the headphone outputs. Low‑power mode restricts the headphone outputs to a maximum power of 280mW per channel into 50Ω headphones, whereas the high‑power mode increases this to a whopping 1030mW into 20Ω headphones (950mW into 32Ω). A full power/impedance list is included in the manual.

If the Crossfeed term raises a quizzical eyebrow, this is an analogue circuit which bleeds some of each channel into the other via a short delay and some EQ, to approximate what each ear hears when auditioning loudspeakers. So Crossfeed is intended to make headphone listening more like the loudspeaker experience, reducing the impression of sounds clustering around each ear (or in the middle of the head) and delivering a more natural spread across a continuous stereo soundstage.

Whereas Grace Design’s legacy m920 was built around a Sabre ESS DAC, the m900 uses an AKM 4490 DAC chip (both are high‑quality, 32‑bit designs) which accepts both high sample‑rate PCM and DSD inputs directly, and includes four reconstruction filter variants. 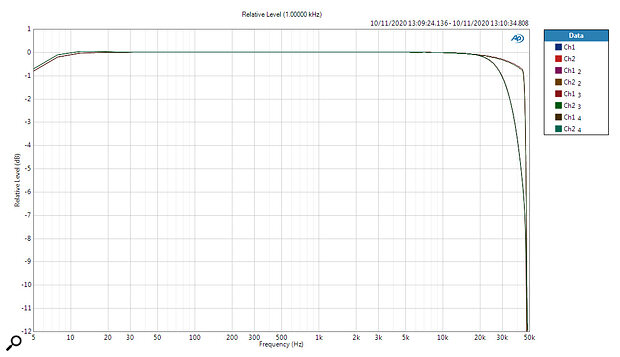 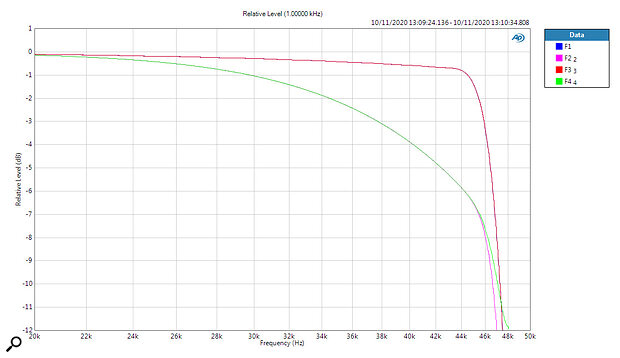 A close up of the region above 20kHz with the same four filter options with a 96kHz sample rate. F1 and F3 are essentially identical ‘brick‑wall’ responses, but F1 is linear phase while F3 is minimum phase. F4’s slope differs slightly from F2, but these are obviously gentler responses.

In typical hi‑fi equipment the analogue output level for a 0dBFS digital signal is normally 2V rms (+8dBu), and I found a volume setting of 90 on the m900 achieved this, leaving an additional 9.5dB of gain in hand on the control knob.

AKM’s data sheet suggests a 120dB (A‑wtd) dynamic range, and my standard AES17 dynamic range measurement using an Audio Precision test set measured the m900 at 117.5dB (A‑wtd), which is an impressive result for such a modest and relatively affordable unit. To place it in context, this is slightly better than the Prism Sound Lyra, and on a par with the Benchmark DAC1, and I would class it as ‘mastering quality’. (Current state‑of‑the‑art converters are scoring a little over 125dB A‑wtd.)

The THD measurement yielded a figure of 0.0003 percent (‑110dBu), and I ran a 32‑tone intermodulation test which also yielded excellent results. In fact, all of my bench tests matched or exceeded the published specifications and the m900’s performance is notably better than many alternatives at a similar price. 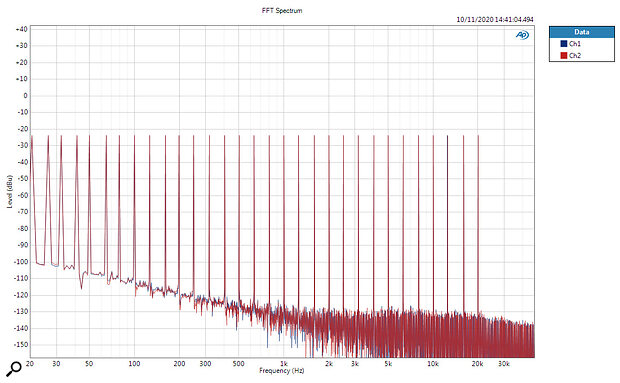 32‑tone FFT Spectrum: a plot showing the spectrum with 32 tones to test for intermodulation. This shows a very clean response with all artefacts below 100dBu. 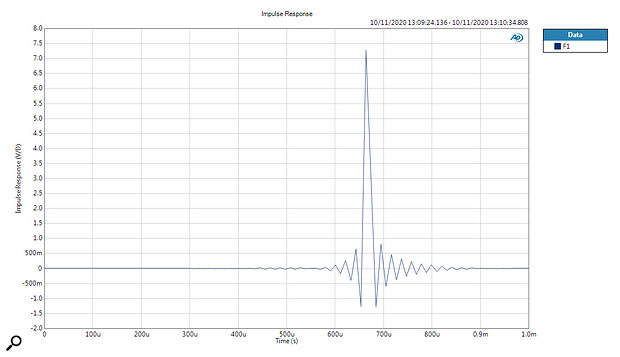 These four plots compare the impulse responses for the four filter options. F1 and F2 are linear phase (with symmetrical pre/post‑ringing), while F3 and F4 are minimum phase, so have mostly post‑ringing. 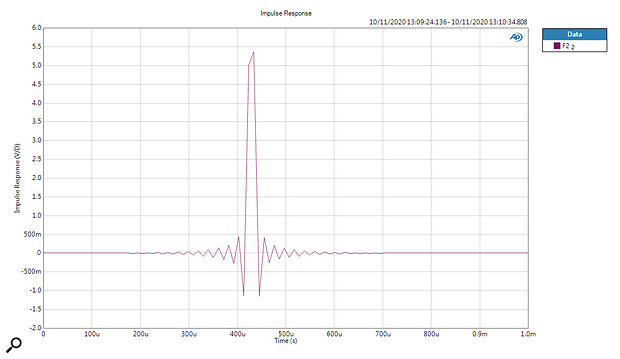 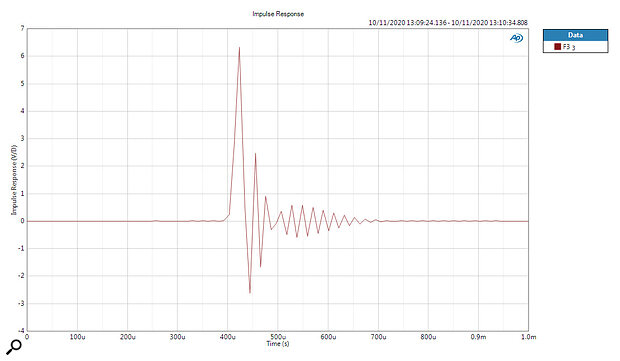 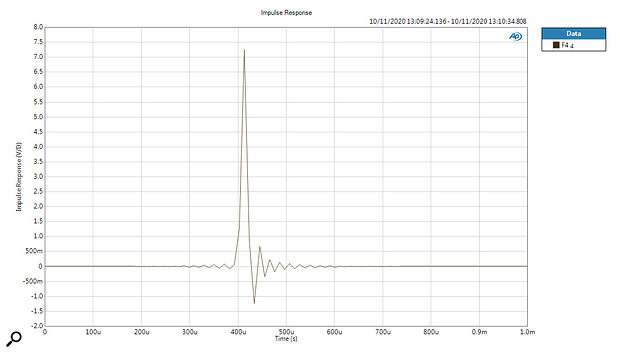 While there are compact analogue monitor controllers, and compact DACs with headphone outputs, I can’t think of anything that realistically matches the capabilities and quality of the m900 at anywhere close to the same price.

This highly compact, yet remarkably versatile mastering‑quality DAC and headphone amplifier can also serve as a very capable monitor controller.