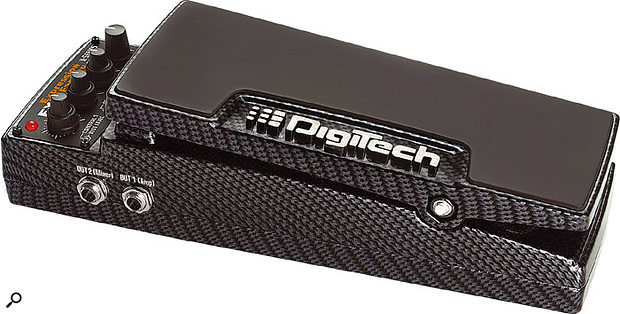 From the outside, the Digitech Expression Factory (£229) looks much like an ordinary wah pedal, but lurking beneath this deceptive exterior is a powerful DSP engine capable of emulating seven classic pedal-controlled effects at the same time as offering seven types of stomp-box distortion and half a dozen speaker cabinet models.

All this is controlled by three dual-concentric knobs, a model selector knob and two footswitches, one under the toe of the pedal and one under the heel. The outer rings of the three dual-concentric controls adjust the selected distortion effect while the inner knobs change function depending on the effect selected. The output can be mono or stereo, and a further dual-mono output mode is available where one output feeds your guitar amplifier and the other a mixer. DSP chips are generally very power-hungry, and the Expression Factory sensibly runs off an included mains power adaptor instead of batteries. Engineered from cast metal, the pedal has an effective non-slip base and is heavy enough not to move around on stage.

As usual with such products, the original units which the effects were modelled on are listed along with a disclaimer stating that there is no connection with, or endorsement by, these companies. The main effects pay tribute to the Dunlop Cry Baby wah pedal, the vintage Vox Clyde McCoy wah, the Digitech XP300 Space Station Synth Swell, the Digitech Whammy pitch-shifter, Unicord's Univibe chorus, the Leslie 147 rotary speaker and the respected A/DA Flanger. There's also the option to use the pedal as a simple volume pedal.

To select one of the distortion models, you simply press and hold the toe switch for three seconds, then select one of the seven positions on the model switch. This process links the distortion effect to the currently selected pedal effect so that when you next recall that effect, you'll always get the same distortion type you teamed it with. If you don't want to use the distortion, it can be switched in and out. Pressing the toe switch engages the pedal effect only while pressing the heel switch brings in the pedal effect plus the overdrive/distortion. The distortion models (again, accompanied by the usual disclaimer) are based on the very popular Ibanez TS9 Tube Screamer, the DOD 250, the Boss DS1, ProCo's Rat, the Boss Metal Zone, the Digitech Metal Master and the Electro-Harmonix Big Muff Pi. For recording or use with a PA mixer, each distortion model comes linked to a specific cabinet emulation type. No cabinet model is used when the Leslie effect is selected as that is already modelled to produce the Leslie speaker's tonal character.

Using the pedal is relatively simple, but the fact that you can't store and recall effect patches in the same way as you can with more comprehensive effects processors means that at gigs you'll either have to limit yourself to one or two settings or resign yourself to bending down a lot between songs. You also need to remember what the three effect knobs do for each model but this doesn't take much getting used to. You can reduce the amount of bending down by plugging in the optional FS3X three-button footswith for changing between the seven models and for turning the distortion on and off.

So how about the sounds? The Expression Factory is impressive right across the board and the overdrive effects have a real analogue quality to them. Of the pedal effects, it's hard to choose a favourite as all get very close to the sound they claim to emulate. The wah-wah sounds are very authentic and don't break up on the resonant peaks, the Univibe nails the lumpy chorus of the real thing and even the rather more esoteric Synth Swell effect is surprisingly usable. In all cases the pedal itself controls some element of the sound, such as wah position, modulation rate or whammy pitch-bend, so while the rotary speaker doesn't speed up and slow down with the same acceleration characteristics as the real thing, you can control the rate yourself via the pedal during performance. Overall, the Digitech Expression Factory delivers both quality and quantity in a compact package. Paul White 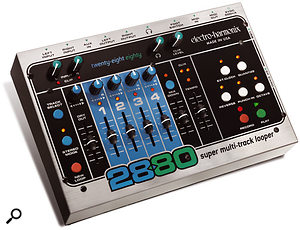 The latest product from States-side eccentrics Electro-Harmonix is the 2880 Super Multitrack Looper, a six-track digital loop recorder. There are four tracks for recording, each with its own level and pan controls. These can be pitch-shifted, reversed and manipulated and then moved to a stereo mixdown track, freeing up space for more loops to be recorded.

The 256MB Compact Flash memory card supplied with the 2880 allows for up to 480 seconds of 16-bit/44.1kHz audio on each of the four recording tracks and the mixdown track, but it accepts cards up to 2GB in size and also has a USB port for backing up audio to a Mac or PC. Other features include stereo inputs and outputs, an aux input and headphone out, MIDI in and out ports for external sync and a footswitch input for live performance control. The 2880 Super Multitrack Looper costs £299.

FCN Music have taken on distribution of L R Baggs products. L R Baggs, who are based in California, produce a range of pickup systems and preamps for acoustic and electric guitar and other stringed instruments, including the unique iBeam bridge-plate transducer pickup for acoustic guitar and the handy Para DI direct box with built-in EQ.

Godin Guitars also have a new UK distributor in the shape of Active Music Distribution. The Canadian company are perhaps best known for their Multiac range of innovative nylon- and steel-strung electroacoustic guitars, some of which feature built-in compatability with Roland's GR-series guitar synth modules. However, they've just added a new model to their range of solid-body electrics. Assembled in the USA from parts made in Canada, the Triumph has three low-noise Godin single-coil pickups and a fixed-bridge, string-through-body design. The 22-fret maple neck has a 24.75-inch scale length and 12-inch radius, and there's a five-way pickup selector switch and global volume and tone controls. Body construction varies according to finish — the natural model has a mahogany body while the sparkle-finish models have a maple centre block with poplar wings. In addition to the blue finish shown here, red and silver sparkle finishes are available. The Triumph guitars cost £487 for the sparkle models and £448 for the natural and come with a deluxe gig bag.

Re-amping is the name given to the technique of feeding a clean, DI'd guitar signal you have already recorded into a guitar amplifier in order to re-record the results. Usually, the clean signal is recorded alongside (rather than instead of) a conventionally miked-up amp. Doing this ensures that if you capture a great performance but fail to get the sound just right, you can have another go at recording it, or indeed an infinite number of attempts, replaying the track over and over again while you optimise amp settings and mic positioning. 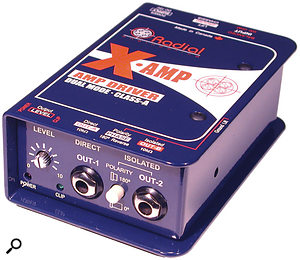 Purpose-built devices like the Radial X-Amp provide impedance matching and level adjustment for re-amping.The fact that there are dedicated products on the market to do this job (Radial Technology's X-Amp and Little Labs' Red Eye, for example) is perhaps an indication that it is not quite as simple in practice as it seems in concept. The key to making re-amping work properly is to make the signal you are feeding to the amplifier resemble, as closely as possible, a normal guitar signal. This means not only getting the level right but also the source impedance that the amplifier's input stage is seeing.

If you just feed a low-impedance, line-level signal straight into a guitar amp you will get masses of hiss and a ton of nasty, front-end overdrive, so the first step is to set up a variable level output for your DI'd recording. This can be a pre-fade aux send, if you are using a conventional mixing desk, or a separate output on your computer audio interface. The next step is to plug a guitar into your amp, set the amp's controls roughly where you think you might want them, and play a few notes to give your ears a reference level. Then substitute the output from the aux send for your guitar and fade it up until the level is roughly the same. The final touch is to employ a guitar pedal with a buffered output (in other words, not a 'true bypass' pedal), to provide impedance matching. Examples of buffered pedals include stomp boxes made by Boss, Ibanez and many others — essentially, anything with soft-touch, electronic switching, rather than a chunky, silver Switchcraft latching switch that makes a loud 'clunk' when you step on it. As you are using the pedal in bypass mode simply for the purpose of impedance matching, it doesn't much matter what it is.

Then, you just need to play back your guitar track, adjust the amp's controls and mic positioning until you are happy with the result and then record the new sound to another track. If you are still not sure, re-record it several times with different mics and/or positions and then listen to them in the context of your mix. You may want to nudge the timing a little to compensate for the round trip through your converters or any other processing delay in your system — compare the new take against the original miked track as a reference to help line it up. If you use pedals as part of the signal chain, they may not always behave exactly as they do when they are fed directly from a guitar (overdrives in particular), but you can still get a lot of useful tonal manipulation out of them, especially as you can keep on tweaking until you get it right.

There's no need to restrict yourself to real amps — the technique works perfectly well with a Pod, or similar processor. You still need the pedal buffer, though, as the Pod's input is optimised for guitars. Don't let the replay level creep up or you'll risk clipping on transients, which might sound OK with a valve amp, but not with a digital processor's A-D converter! The best results, in my experience, usually come through creating a better version of the sound you originally recorded with, but you can get some nice surprises when you get a bit more radical, say, taking a track that was recorded with a lot of distortion and re-amping the DI signal through a much cleaner amp. I find re-amping one of the most stimulating recording processes of all as you can be as experimental as you like, knowing that you can always have another go if it doesn't quite work, as you've already got the performance captured. Dave Lockwood