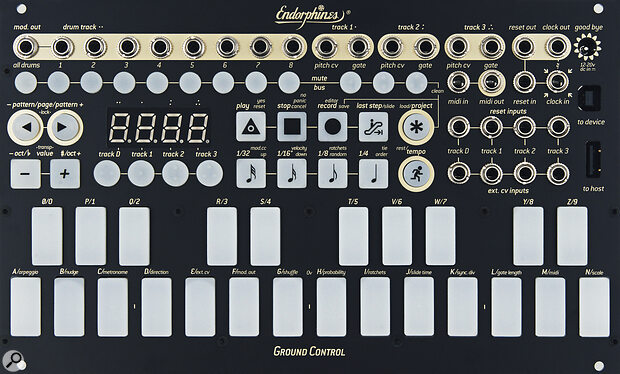 After first announcing the Ground Control at Superbooth back in 2019, Barcelona‑based developers Endorphin.es, aka dynamic duo Andreas Zhukovsky and Julia Bondar, have finally ironed out the folds when it comes to their contender for a system‑driving controller and sequencer. After several major firmware updates and the introduction of an alternate, silver faceplate, has it been worth the wait?

With an interface of light‑up rubber buttons and an attractive classic four digit display, the Ground Control has made every effort to create a spacious environment with little to no menu‑diving. It features four separate sequencer tracks — one drum track and three melodic tracks — as well as a fully playable two‑octave Korg Nanokey‑style chromatic keyboard. The drum track features eight separate gate outputs and a modulation output, while the three melodic tracks each present simple gate and pitch outputs. Endorphin.es have always had an excellent eye for design and, just as importantly in my opinion, for fun (just look at their Shuttle System). The Ground Control certainly doesn’t disappoint in this respect: it’s very pretty. And look! It has a little running man on the tempo button! It has a tiny weeny escalator on the last step button! It says goodbye above the power supply input!

Rarely do Eurorack modules attempt to fit so much tactile playability and system‑centric brain power into the same panel. It’s a challenge accepted with gusto by Endorphin.es here but with one major caveat: this thing is big — 42hp to be exact. The onboard chromatic keyboard, primarily responsible for this width, represents a host of functions but isn’t velocity or pressure sensitive, meaning that after a certain point its functionality reaches a noticeable cutoff. Furthermore, if you’re like me and tend to keep your system mounted vertically and not flat on the table, it’s conventionally unplayable unless you incorporate an external MIDI keyboard. Which, in fairness, this module is entirely compatible with. With both this and the rack space issue in mind, one can’t but question the decision not to give the Ground Control its own standalone chassis like many other modules of its ilk (witness the Make Noise 0‑Ctrl, the Doepfer Dark Time or the Moog Mother‑32). Notwithstanding this particular bugbear, the Ground Control would be right at home in a hands‑on bottom row next to modules like Make Noise’s Pressure Points or Intellijel’s Planar. Once housed and playable, performability and system control come together with finesse.

Endorphin.es have endeavoured to come up with a module that capably rubs shoulders with Eurorack’s star sequencers, and they have succeeded.

Each track can store 24 patterns of up to 64 steps, grouped into 24 projects. In other words, plenty. Patterns are assigned using letters of the alphabet, except, somewhat confusingly, X and U (in the manual this is chalked up to the Latin alphabet having 24 letters, so we’ll give Endorphin.es the benefit of the doubt there). Power up the module for the first time and track one defaults to pattern L, track two to O, track three to V and track four to E. That’s right: Endorphin.es have a message and that message is love. Yay for modular! Once ordered to your preference, cleanly transitioning from one pattern to another in a live setting is a breeze. To avoid menu‑diving, the Tempo’ and Project buttons are the Ground Control’s main ‘shift’ style buttons. Although it’s not always intrinsically clear which to press for what function, once learned they make for very quick work.

When it comes to its melodic tracks, the Ground Control’s workflow resembles something like Arturia’s ubiquitous Keystep controller, in that sequences are programmed in the first instance by inputting notes from a chromatic keyboard. One thing that is very handy indeed is the capacity to easily program slides in a melodic sequence by holding one note while pressing the next, opening the door for some brilliantly dynamic movement. The drum track has the option for — as Endorphin.es call it — an ‘X0X’ style 16‑step sequencer where the bottom row of keys become the step row complete with moving key light, à la the Roland 808, 707 and so on. The eagle‑eyed may point out that a two‑octave chromatic keyboard only offers 14 keys on its bottom row, so the Ground Control slightly awkwardly incorporates two of the upper ‘black’ keys to make up the difference. A little odd but you do get used to it. All in all, it’s a glorious amount of control whatever your preference. I happened to find a huge amount of satisfaction programming a melody from one of the melodic tracks but sending gates from one of the drum track outputs, creating room for all sorts of Euclidean madness.

Another star asset to the Ground Control is its arpeggiator. It’s not only possible to hold or latch an arpeggio in a variety of timings and note orders (all quickly changeable with the note keys and subdivision buttons), you can also have completely different arpeggios playing simultaneously across different tracks. When it comes to the drum track the arpeggiator is replaced with a handy roll function, lending further opportunities for variation within your sequences.

Let’s take a step back for a moment and appreciate that on this one module you could easily improvise a lead melody over a rhythm arpeggio and a sequenced bass part, all accompanied by a fully syncopated and varied drum pattern. With modulation. That is very impressive indeed. Endorphin.es have endeavoured to come up with a module that capably rubs shoulders with Eurorack’s star sequencers, and they have succeeded. After leaving it patched in even for a short while, I honestly wasn’t sure how I ever worked without it.

There is no end of fantastic drum modules available in Eurorack format, but it’s important not to forget that even with a basic system it’s likely you already have what you need to achieve some great modular drums. In the most basic sense, you might find it helpful to separate your drum sounds into those that snap, like a snare or hi‑hat, and those that boom like a tom or a kick drum. For the former, white or pink noise (or any other!) as your source audio is a great place to start, while for the latter even a single low‑tuned oscillator will achieve good results.

Next you’ll need the right envelope: a basic four stage envelope generator will work with a sharp attack, quick decay, no sustain and a brief release, but for a really percussive feel it’s ideal to have control over the exponential curve of your envelope. You can find this function on modules like Make Noise’s Maths or Instruō’s Cèis.

While snare, hi‑hat and cymbal sounds generally prefer to diffuse with a consistent pitch and their filter high, kick and tom sounds tend to be characterised by a rapidly descending pitch and/or cutoff frequency. Just one envelope generator, multed to your source oscillator’s frequency, filter and amplitude can achieve this well. I recommend gradually dialling up the envelope amount from zero, as it’s easy to cross over into laser‑gun‑sounding territory.

Once your basic patch is in place it’s time to introduce some detail and modulation. More harmonically complex source audio will add depth to your sounds, while subtle modulation of pitch and envelope time goes a long way when it comes to musical variation and dynamics in a sequence. You could try using different envelopes for the filter and pitch for further detail, and some short reverb can add an important transient for a physical feel. Don’t be afraid to record your sounds one‑by‑one and make a bespoke sample bank; in no time at all you’ll have a great sounding drum kit, doubtless with a few sounds of your own invention! William Stokes