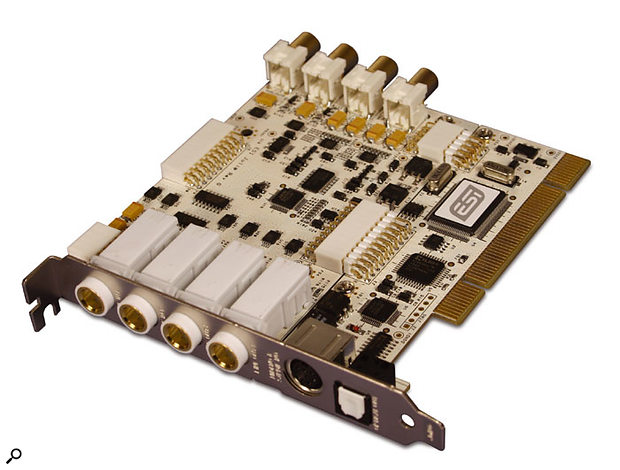 With its clever reversible analogue I/O section plus comprehensive, multi-client driver support, ESI's Julia is not your average stereo soundcard.

Do you want a soundcard with balanced TRS (Tip/Ring/Sleeve) analogue I/O to avoid the buzzes, hums and digital nasties associated with ground loop problems, running at professional +4dB interface levels, and using robust quarter-inch jack sockets? Or does the rest of your gear have unbalanced consumer I/O requirements, including more sensitive -10dBV inputs, lower -10dBV output levels, and use phono sockets?

If you want maximum flexibility, ESI's oddly named Julia (or 'Juli@', as they spell it — there's a RoMI/O one-in/two-out USB MIDI interface in the range as well) provides two analogue ins and outs, co-axial S/PDIF in and out, optical S/PDIF out, and a MIDI In and Out. Nothing special so far, but the novel twist is that it can provide either of the above analogue options, utilising an extremely clever circuit board that has a reversible top half with four jack sockets on one side and four phono sockets on the other — before you install it you decide which is the best option for your needs.

You Spin Me Right Round

The Julia certainly looks different with its cream silk-screened circuit board and white sockets, and the fact that there are plenty of components on both sides of the board, but it's the extra pair of metal brackets and four edge sockets (two each at top and bottom of the board) that really make it unusual. To switch between +4dBu balanced inputs and outputs on TRS-wired quarter-inch jack sockets and -10dBV unbalanced I/O on unbalanced phono sockets you remove four screws and the backplate, unplug the two halves of the circuit board, and then rotate the top analogue half by 180 degrees, plug it back in to the lower digital half and screw the whole assembly back together. The manual provides copious photographs of the process, but does warn against touching any of the circuitry to avoid possible static damage.

There are sound engineering reasons behind this design, since it avoids the usual 6dB drop in output levels when running most balanced output circuitry to an unbalanced destination, and you don't get the 6dB drop in input sensitivity when running an unbalanced source into balanced input circuitry. Keeping the two sets of input circuitry quite separate may also result in slightly better audio performance in each case, and unless you anticipate needing to regularly switch between the two input options (which would become tedious), there's no denying the cleverness of this approach.

The lower digital portion of the circuit board provides a shuttered optical S/PDIF output, plus an 8-pin socket for the supplied foot-long breakout cable with twin phono sockets for S/PDIF co-axial I/O and twin 5-pin DIN in-line MIDI sockets. Julia is also compatible with both +3.3 Volt and +5 Volt PCI slots for maximum compatibility with motherboards. 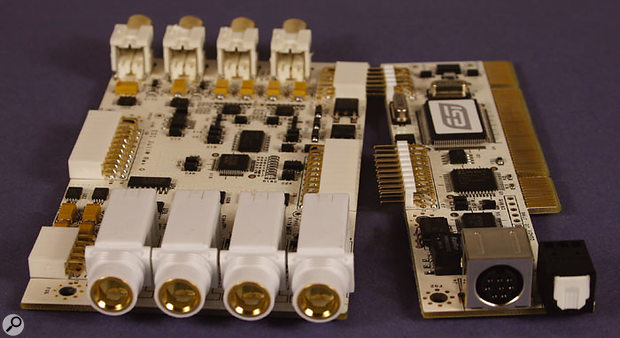 The Julia's analogue I/O can be switched from balanced jacks to unbalanced phono sockets by rotating the top section of the card.

Strictly speaking the Julia is still PC-only, since it's only bundled with drivers suitable for Windows 98SE, Me, 2000 and XP, along with an introductory ESI version of Ableton Live and a 50 percent discount off the full version if you upgrade. However, while checking on the ESI web site to make sure I had the very latest XP drivers, I also discovered beta drivers for Mac OS 10.2 or better, so by the time you read this a full Mac release ought to be available. I selected the +4dBu card option, had no problems installing the version 1.10 Windows XP drivers (which unlike many are a tiny download at just 167k), and was soon auditioning the new soundcard via its Console utility alongside my Emu 1820M.

The Julia Console is easy to use, and bears a strong family resemblance to that of Audiotrak's Maya 44 MkII, which I reviewed back in SOS August 2004 (Audiotrak is the consumer division of ESI Pro). Once again it's divided into four main areas covering input, output, master and digital functions, with additional drop-down menus containing further items. 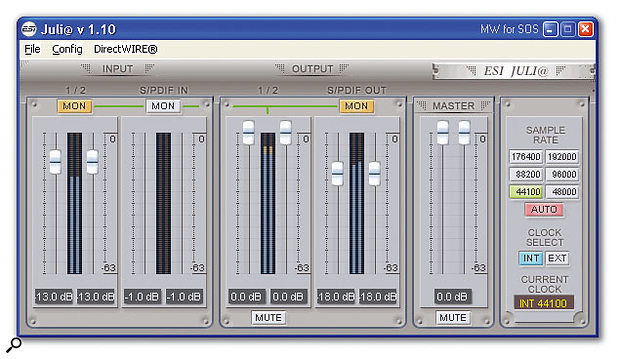 Despite a very easy-to-understand interface, the Julia's Console utility provides a surprising amount of versatility, largely due to its E-WDM drivers and Direct Wire patchbay.

As with most interface designs, disabling the extra monitoring circuitry and leaving the remaining faders fully up will provide the cleanest and quietest signals from the analogue outputs, but this is a handy monitoring system, and the only option some users might miss is being able to instead use the S/PDIF outputs to set up a monitor mix separate from the signal at the main analogue outputs. The only operational difficulty I experienced was occasional 'sticking' of the console faders as I moved them, but otherwise everything worked well.

In the digital area, the sample rate can either match that of the audio being played when the 'Auto' button is lit, or be selected manually from the six rate buttons, while you can run the card from its own internal clock or via that derived from an incoming S/PDIF signal using the two buttons beneath. The current sample rate appears in a box at the bottom of this area. Further menu items let you adjust latency and launch ESI Pro's clever Direct Wire digital patchbay, which lets you route the hardware input or the inputs or outputs of the MME, WDM, ASIO and GSIF drivers internally for any of the four channels. For anyone who wants to port the output of one application into another, this can be invaluable.

From the word go I found the Julia easy to use, and it sounded extremely quiet and clean at all sample rates and bit depths. Using Rightmark's Audio Analyser, the frequency response proved to be extremely flat, being just 0.3dB down at 4Hz and 20.3kHz with a sample rate of 44.1kHz, extending to 44kHz with 96kHz sample rate, and 62kHz with 192kHz sample rate — all this augurs well for improved audio quality at the higher sample rates, as my subsequent listening tests proved. Meanwhile, the measured dynamic range stayed remarkably constant at a good 106dBA across all sample rates (the rather better noise figures quoted by ESI are for the converters alone), and the THD (Total Harmonic Distortion) was a very low 0.0004 percent.

I then matched the output levels of my new benchmark Emu 1820M and the Julia card to within 0.1dB and blind tested them to pick out any differences, to place the Julia's sound into context. Both cards provided very good audio quality, but after several minutes of auditioning with a wide range of material I could always reliably pick out the 1820M as having a slightly warmer, more natural and focused sound — once again, I suspect, due to a lower-jitter clock. Nevertheless, I judged the sound of the Julia's converters as excellent for a £109 soundcard, and slightly better than many others at a similar price.

The Julia's multi-client drivers worked beautifully, with Cubase managing the lowest 48-sample buffer size at 44.1kHz for a very low latency of 1.1ms using the ASIO drivers, while Gigastudio 160 managed the 64-sample size at the same sample rate for a still excellent 1.5ms latency with the GSIF ones. Even better, I had no problems selecting and running the GSIF drivers for the analogue outputs simultaneously with the ASIO and MME-WDM ones — this is versatility indeed!

Although PCI cards like Event's Mia MIDI provide a similar spec and measured dynamic range, they only offer support up to 96kHz. If you want one of the new class of cards with 192kHz-capable converters then your options narrow considerably, and the most obvious competitor to Julia is Emu's 1212M.

This sells on the street for about £20 more and has about 11dB better dynamic range; I doubt that many users will notice the difference in practice, but the 1212M does seem to have a lower-jitter clock and therefore a slightly 'tighter' sound, plus additional ADAT optical I/O and Firewire port, and a far more comprehensive DSP mixer and good set of DSP effects. On the other hand, the Julia's frequency response is slightly flatter at both ends, it provides 96kHz/192kHz WDM and GSIF driver support that the Emu range currently doesn't, plus the useful Direct Wire patchbay, and I know many potential users will find the Julia's Console utility far easier to use than Emu's Patchmix DSP mixer.

ESI's Julia is a versatile soundcard thanks to its swappable I/O and extensive driver support, it sounds good, and is good value for money. I can see it appealing to Gigastudio users as well as any musician who wants high audio quality in a straightforward package with few compromises. Need I say more?

With a clever hardware design, good audio quality, and well-written and versatile drivers, ESI's Julia should find plenty of admirers.