The orchestral gravy train rolls on. Having set the scene with their Pro Edition's fine string ensembles and the exquisite Solo Strings (reviewed in SOS March and September 2004 respectively), Vienna Symphonic Library now dish up a complete string chamber orchestra of six violins, four violas, three cellos, and two double basses. The four sections were recorded separately, each contributing around 4.5GB of samples to the 18.2GB total.

Chamber Strings closely follows the format of its predecessors, but also introduces a couple of new styles: natural harmonics (flageolet), a breathy, gaseous, and ethereal timbre produced by touching the bowed string at various points along its course. Even spookier are the collection of precisely-measured harmonic glissandi, an unsettling, synth-like effect used in Stravinsky's Firebird. None of the harmonics samples are looped; VSL have mapped them to white notes (mainly) in octave sets, so it might take a while to find the pitch you need! The other minor stylistic innovation is the 'Baroque' trill, which dwells on the initial note for a split second before starting the trill.

The two double basses play more than a supporting role — their lyrical, nicely in-tune unison sustains have an unexpected hint of lushness which continues up into the high register. The basses' performance legatos are stern and commanding, and their performance detachés powerfully energetic, though the latter suffer from noticeable latency. Add the cellos' and violas' vibrant, soaring performance legatos, and you have a fantastic foundation for a string arrangement. I'm not keen on the violins' over-the-top 'expressive' vibrato style — it sounds like a synth with its mod wheel turned up full. Thankfully, the regular sustains have a much more subtle vibrato. All the instruments are beautifully played and recorded, sounding rich and well defined.

Each section offers the usual VSL choice of dynamics, note repetitions, and note lengths, and the expansive Performance Tool-controlled options include some excellent Bollywood-style pitch slides. Mod wheel 'release control' can be used to tighten up the decay of all the pizzicatos, essential in fast passages. There are no grace notes, col legnos, straight glissandos or runs, and no big, flattering concert-hall acoustic, but at least that leaves you free to add your own favourite reverb.

In pop arrangements, a chamber group can be a good compromise between the overbearing sound of full orchestral strings and a string quartet's dry, slightly academic timbre. Smaller sections are also useful for programming divisi passages, and for adding musical detail to a large string arrangement. If £544 seems a lot of money for a bit of detail, bear in mind that you get nearly 32,000 samples! Definitely a specialist title, but if you specifically need a chamber string sound, this is probably the best solution you're likely to find. Dave Stewart

My esteemed editor remarked that this library 'seems a little niche'. Well, yes. If the trend for specialisation continues, we'll soon be seeing titles like Viola Top String: Volume One. The point of this release — and some may think it a slender pretext for issuing a whole new title — is to give VSL's users a few alternative and bonus woodwinds. The French oboe is the main act, with a small supporting cast of English horn, 'E'-flat clarinet, and piccolo runs, bringing the sample total up to 6.7GB.

Compared to the broad timbre of the Viennese oboe in VSL's Pro Edition, the title instrument sounds less mellow and more pointed. Its exotic, piercing, yet sad and plaintive tone, reminiscent of oriental and Middle Eastern reeds, would sound equally at home in a conventional orchestral arrangement or a world-music setting. The oboe player delivers the full VSL complement of styles with great panache — once you hear the vivid, colourful quality of his accelerating trills, grace notes, and octave runs, you'll want to feature them in your score!

Not wishing to sound nationalistic, but much as I enjoyed the French oboe, the star attraction for me is the English horn (aka cor anglais). Played by the same performer, its tone is rich and reflective, and the lovely, expressive vibrato of its performance legatos make it a contender for pop tracks as well as orchestral work. An absolute joy, and with the Performance Tool facilitating the programming of smoothly contoured legato melody lines, you'd be hard pushed to know you're not hearing a live player.

The English horn and small, high-pitched 'E'-flat clarinet are limited to single notes and performance legatos, the latter style really bringing the clarinet to life. The darting piccolo octave runs supply a performance category missing from the Pro Edition. All good stuff, but, with three out of four instruments incomplete, this has the feel of filler material.

VSL's Symphonic Cube mega-edition, when it arrives, is likely to incorporate the contents of this and other Horizon-series titles. There will be a discount scheme for registered Horizon owners, but in the meantime buyers may think twice before shelling out for what amounts to an interim release. Having said that, this niche title is musically and technically on a par with the other Vienna libraries — hence the five stars.

There are two more VSL releases worth mentioning in a similar vein, both costing £177 in the UK: Vienna Harps gives you all the pristine harp performances from the Pro Edition and adds 2.1GB of samples (no glissandi) played on an equally beautiful second harp; and the exotic, largely non-orchestral samples on FX Percussion, which are taken entirely from the Pro Edition. Dave Stewart

Given the title of this library, those without an interest in jazz might be tempted to pass on by in search of something more cutting edge. In doing that, however, you might just miss out on something a little bit different. Zero-G's Akoustik Bass Hitz is not just another jazz-flavoured collection of acoustic bass samples. Yes, there are some jazz loops here — but there are also all sorts of other musical styles represented, including some not usually associated with acoustic bass. The collection also includes other construction-kit elements (38 kits, totalling some 900 WAV files and a similar number of REX loops) as there are a number of drum loops and a smattering of other instrumental loops designed to work with the basses. 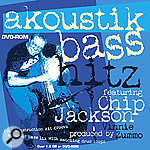 So far, so normal. However, in experimenting with the WAV files using Sony Acid Pro, a number of things stood out. First, the quality of the acoustic bass playing is excellent. Chip Jackson's playing has 'attitude' written all the way through it, and whatever musical context these loops are used in they will add a distinctive character of their own. Second, the sound of the bass is huge and feels very 'live'.

Of course, some of the loops are laid back and cool, but there are just as many that have a tremendous amount of energy, with loads of finger noise to add character — just take care with your speakers, as the bottom end of this lot will really get those cones moving! Indeed, with a few loops, I had to use a little EQ to stop the overall output levels getting out of control and to get the bass sitting in the mix. This said, I'd rather have the bottom end and then cut it a little rather than attempt to add it to a flimsy-sounding bass line.

The other loops provided are equally inspiring — mainly drums, but also including a good number of guitar loops, while the occasional Rhodes, dobro, banjo, and mandolin are thrown in for good measure. There is easily enough material here to construct complete rhythm sections and some full backing tracks without dipping into other libraries.

However, as mentioned above, perhaps the most interesting feature is the range of musical styles covered. Folders such as 3-4 Jazz and On The Jazz Tip do, of course, deliver exactly what you might expect from the acoustic bass (although the results here are big and very much in your face) and there are also a number of lounge-style pieces. However, there are some surprises too — Jungle, Funk, Hip Hop, Dance, Reggae, Latin, Swing, Bluegrass, and even Metal all get a look in. The latter is impressive and weird in equal amounts — think lo-fi acoustic bass with distortion playing Led Zeppelin-style riffs and you will get the general idea.

Although the collection contains some repetition (the same phrases are played at a number of different pitches within some of the construction kits), it would be churlish to be too critical given the quantity of material supplied, the multiple formats, and the selling price. However, what is really impressive is the speaker-shaking sound and attitude of the playing. If you don't usually consider acoustic bass to be part of your musical palette, Akoustik Bass Hitz might just change your mind. John Walden

Not! Sure! About! The! Exclamation! Mark! If ordering from a dealer, does one need to shout the title? Consolidated! is a compilation of sound libraries created by sound-engineer/producer Michiel Post. Formerly head of audio at the Dutch Royal Opera House, Michiel founded Post Audio Media in 1999 and produced 15 libraries before starting Post Musical Instruments, which specialises in sampled pianos.

Unsurprisingly, grand pianos predominate on this 10.7GB release: Steinway D Grandioso ('classic' version) and Yamaha C7 (ambient version) are included, along with full versions of his Bösendorfer 290 and Estonia concert grands. The last two, though somewhat outgunned by PMI's recent pair of piano releases, sound very good. Also on board are PMI Historic Keyboards (harpsichords, fortepiano, and virginal, the latter marred by some over-loud release triggers) and the entire contents of Post Orchestral Instruments, which features an entertaining prepared piano. All these titles have already been reviewed in SOS.

This library's second largest category is organs. Pick of the bunch is the small, sweet, and friendly calliope-like (think Magic Roundabout) sound of the Positif single-manual church organ, offering five perfectly sampled presets. The 1935 Theatre Organ is a larger, more complex affair with big-sounding pedals and reverb, but its strong, colourful, and distinctive solo voices contain no trace of the amusingly over-the-top vibrato I was eagerly anticipating. The most varied timbres (though still no vibrato) come from Organ Toolkit, a large grab-bag of atmospheric multisamples played on four different pipe organs. Some caveats — the Solo Organ set's first two presets (one of which contains a glitchy bass sample) are not tuned to concert pitch, and the organs' documentation is often at variance with what's actually on the DVD.

The library's six accordions are excellent, though the bandoleon instrument suffers from more rogue tuning. Other clangers (though in the good sense) include a fine set of church bells and a bracing collection of anvil hits, with a dinky toy piano providing some light relief. In the miscellaneous category, lovely tuned bowl hits, a decent kalimba, and the beautiful, sustaining zither-like Small Harp achieve high marks; a totally out-of-tune dulcimer, an indifferent steel-string guitar, and a disastrous alto flute mark the low points. There are a few other wind instruments, none of them a resounding success.

Consolidated! is a curious mixture; while much of its material is of the highest musical quality, the surprisingly poor presentation and unfinished programming of some items seems to indicate they have been thrown in as an afterthought. Don't let that put you off — well-sampled keyboard instruments are hard to come by, and the large array provided here will surely plug some gaps in your sample library. Dave Stewart