These flexible effects pedals from the makers of the original Harmonizer are equally at home on stage and in the studio, with guitar, keys or even a mixing desk. 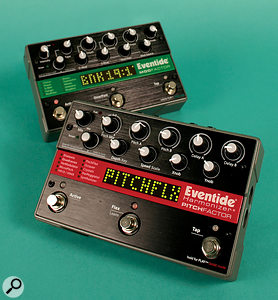 Eventide have an enviable reputation when it comes to studio effects, ranking alongside the likes of Lexicon and TC Electronic, and when it comes to pitch-shift effects, they're regarded by many as the best. With their 'Factor' series, they've now entered the world of stomp-box effects. We reviewed the TimeFactor pedal back in SOS March 2008, and I was keen to look at the two that have followed it, the ModFactor and the PitchFactor.

All three pedals are housed in unfussy metal cases, each sporting three footswitches, 11 knobs (one is a rotary encoder) and a retro eight-character LED display. An expression pedal can be used to change parameters in real time, and program changes and other parameters can be controlled by MIDI, via the In and Out/Thru sockets on the rear.

Despite the pedal format, the 'Factor' series makes use of algorithms drawn from Eventide's best effects from their 36 years in the business. Also, the input and output sensitivity can each be switched, so the input can accept line or guitar level, and the output can send at amp or line level — which means that they can be used for most applications on stage or in the studio.

Each pedal takes up little space (122 x 190 x 54mm) and weights only 1kg. Power comes from an external power adaptor (the plug type), with the usual flimsy cable and push‑in, fall‑out connector wired for centre-pin positive, and carrying 12V at 1200mA. This is located on the rear panel alongside the USB connector (for software updates), jacks for an optional expression pedal and Aux switch, plus the two input and two output jacks. It's a popular format for pedal PSUs, but I'm not a fan of it, particularly given that you can't power these pedals from a battery. Fixing to a pedalboard may help prevent accidental disconnection.

The ModFactor gives you 25 modulation effects (in mono or stereo), which come under 10 categories: Chorus, Phaser, Q‑Wah, Flanger, ModFilter, Rotary, TremoloPan, Vibrato, Undulator and Ringmod. These are printed on the left of the front panel, with an LED next to each, so you can see which is selected. Rather than a simple LFO, you get two modulation sources, each with a choice of seven waveshapes, envelope or ADSR control.

Up to 40 user programs can be stored, and you can change instantly between programs without any glitches or gaps. The parameter adjustment knobs can all be used for smooth, real‑time parameter control, and the effects can be locked to a song's tempo, using MIDI Clock or the tap‑tempo footswitch.

There's a choice of DSP bypass or hard, relay‑switched bypass. With the latter, there's no effect on the audio quality when the effects are bypassed, but time‑related effects are cut short, and there can be level discrepancies. The DSP bypass allows effects to finish their business, and maintains the analogue buffering that's necessary when feeding a guitar into a line input, or a line signal into a guitar amp. There's also a useful 'kill dry' function for using the device as a send effect.

The footswitches can be used in two modes. In 'Play' mode, the switches function as effect bypass, fast‑ or slow‑speed and tap‑tempo, but if you press and hold the tap button for a couple of seconds, the switches become bank and patch selectors. The patches are organised in 20 banks of two, but you can also hide unused banks, so that only those you want to access are displayed. In 'Bank' mode, the right‑hand switch steps through the banks, and the other two scroll through the two patches in that bank. As you change patches, the patch name is displayed briefly, before the display reverts to bank and patch number. In Play mode, the display normally shows a moving cursor that represents the effect modulation, and can appear quite complex when multiple modulation sources are in play.

The rotary encoder selects the effect type and doubles as a push‑button to activate the tap‑tempo mode, and to save patches into memory. The other knobs relate to the main effect parameters and the modulation sources. Each effect has a number of variations, accessed using the 'Type' knob. The other top‑row controls govern intensity, depth, speed, 'Shape' (which refers to the LFO 1 mod waveform) and 'XKnob', which controls effect‑specific parameters, described in detail in the manual. On the lower row are controls for 'D‑Mod' (effect depth), 'S‑Mod' (effect rate), 'Mod Rate' and 'Mod Source'.

On the rear panel, you see rather more than on a typical guitar pedal, including switchable instrument/line inputs and line/amp‑level outputs, as well as a USB port for software updates.

Despite the profusion of knobs, the ModFactor is very straightforward to operate, after a quick read through the brief manual. Make sure, though, that the input level isn't so high that the red peak light comes on! There are few surprising effects, other than 'Undulator', which uses pitch-shift and other processing to create a shimmery, textural sound. Everything is presented at a very high quality, and there are more ways to add modulation than you'd typically expect to find: it's this variety of modulation sources that makes the ModFactor so interesting.

The ADSR envelope allows you to set up filters controlled by level envelopes that respond to picking, and have a complex, pseudo‑random modulation. The flanging effects come close to the feel of tape‑flanging, especially if you select the 'through zero' variant. I wasn't entirely convinced by the authenticity of the rotary‑speaker effect, but it's musical and very usable — which is more important. The sound quality, especially the lack of background noise, is what you'd expect from Eventide, and even the ring modulator, which produces a well‑rounded but angry dissonance, is surprisingly easy to adjust, as the modulation frequencies coincide with musical note pitches. Using the effects in stereo really brings them to life, and I was pleased to find that the parameter knobs send out MIDI data: not only can you record dynamic changes into a sequencer, but you could use the knobs as MIDI remote controls for another device!

On the PitchFactor, the control knobs are designated Mix, Pitch Mix, Pitch A, Pitch B, Delay A, Delay B (as well as the expected pitch effects, delays of up to 1,500ms can be used), Depth/Key, Speed/Scale, XKnob and YKnob. The same rotary encoder steps through the 10 basic effect algorithms, and again doubles as a push‑switch for patch-saving and tempo operations.

Fixed-pitch offsets can be used for parallel harmonies or subtle detuning, but the more adventurous 'Diatonic' effect allows you to choose a key, scale type and interval for one or two harmony notes that are generated automatically, and each harmony note can be given a separate delay time. The scale type can also be learnt from a played chord: the chord name shows up in the display, which is a nice feature. 'Quadravox' operates in a similar way, but can support four voices, and Delay B selects from a number of delay repeat patterns.

'HarModulator/Chromatic Shift' uses two chromatic pitch‑shifters with modulation, and offers a pitch adjustment range of plus or minus three octaves, in semitone steps. Modulation sources include the envelope of the input signal, so there's a lot of dynamic mayhem to be had. 'Micropitch' offers more subtle detuning effects with two voices, each having independent delay times. I still love the simple thickening that you get from a few cents of detuning with this type of effect. 'H910/H949', which sounds like a nasty virus, recreates the sound of the early Eventide Harmonizers, but with increased delay times. You can also wrap feedback around the pitch‑shifting for weird pitch‑spiralling effects. 'PitchFlex' requires an expression pedal to work correctly, and allows foot‑controlled pitch glides with one or two voices, creating whammy‑style effects. You can also use a footswitch, with the up and down pitch‑glide time set using the two delay controls.

'Octaver' combines octave shifting with fuzz and resonant filtering, and the filter can be modulated via the input envelope to create straightforward (but very fun) synth‑like sounds. 'Crystals' uses reverse pitch‑shifting, with delay, feedback and reverb to create clouds of texture that sit nicely behind a clean guitar sound, conjuring up an ethereal vibe.

'Harpeggiator' can create some very complex sequences, which could be very effective with the right sort of music. It uses a dual 16‑step sequencer (for pitch, rhythm and effect) that draws on a library of pre‑programmed sequences. The pitch, rhythm and effect sections work fairly independently, so it makes sense to experiment with just one of them before tinkering with the rest. The sequence tempo can be set manually or locked to MIDI clock, and there are 26 pitch options, as well as a random setting. If you want to be transported back to the Tangerine Dream days, but play guitar rather than keyboard, this will get you close.

Sticking with the same era, 'Synthonizer' tracks a mono input and recreates a new waveform that can be processed by additive or subtractive means, with the addition of a filter and reverb. The envelope attack can be adjusted, and two waveform pitches are available. Although Moog geeks may not be fooled, you can produce some great sounds.

With the Factor series, Eventide have done a great job of getting so much control into such a simple interface. Putting so many classic Eventide effects in each box makes both the ModFactor and PitchFactor pedals very desirable pieces of kit, especially if you like both to explore new effects and recreate classic ones.

The Mod Factor is hard to beat for flexibility and quality, and the ability to mix two modulation sources is great. It can sound stunning in stereo, and the chorus sounds can be extremely rich and fluid, but without the unrefined churning of more basic chorus effects. If you only ever use chorus, this may be more than you need, but if you like exploring tempo‑sync'ed, rhythmic modulation, or more complex modulation waveforms, the ModFactor is very rewarding.

I'm not a big fan of pitch‑shift effects, because I'm not keen on the unnatural shimmer and formant shifting that results, but Eventide have always done a better job than most in this regard, and the PitchFactor is no exception. I loved the 'Crystal' and 'Micropitch' settings, but the octave and synth effects also deserve special attention. Although less unique to Eventide, the quality of the intelligent harmony‑generation is good. The built‑in delays and the ability to do micro‑shifting mean that this box can stand in for a more conventional echo or pseudo‑chorus unit too, so you don't have to use the more outlandish effects to get good results from the PitchFactor — although those who are prepared to experiment will certainly get more out of it.

The switchable stereo input and output connections make all the Factor pedals hugely versatile, and there's actually a little overlap between their capabilities, so you don't need them all to get a good range of effects, and it shouldn't take too much effort to figure out which would best suit your needs. All in all, these are classy‑sounding units from one of the most respected of studio hardware manufacturers.

Eventide's Anthology plug‑ins use their distinctive algorithms, but if you want hardware, Digitech are the other front runners in pitch-shifting, and the TC Electronic 'G' range competes on quality, as do Line 6 on flexibility. For the more outlandish effects, try Roger Linn's AdrenaLinn and M-Audio's Black Box.

All the most popular effects in their respective genres are available from these stomp‑boxes, plus a few more that really aren't available elsewhere. I like the way that both live guitarists and studio users are catered for, and applaud the friendly user interface.