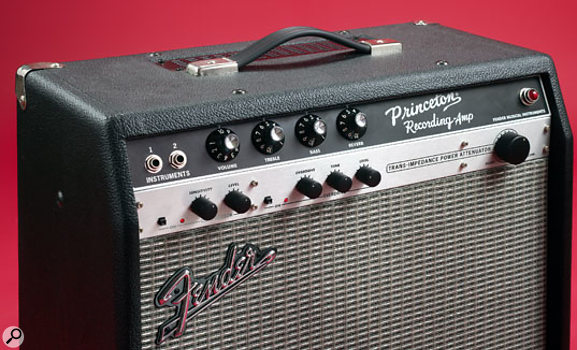 Is this the ultimate recording solution for fans of the classic Fender tube sound?

Fender's original Princeton was built in the 1960s, and although rated at just 15W it became popular for its ability to produce a great tone at moderate sound levels, making it an ideal studio amplifier as well as a practice amp. Today you can pick up a battered original and pay silly money for it — or you could take a look at the new Princeton Recording Amp...

Designed to recreate the tone of the original, this new version is built in Mexico using extremely up-to-date manufacturing methods, as its densely packed circuit boards testify: you'll find neither point-to-point wiring nor generously spaced, hand-assembled PCBs here. Nevertheless, its preamp and power-amp circuits are still based on the all-tube 65 Princeton Reverb model, and they drive a 10-inch Jensen speaker. It can provide a surprising amount of volume, considering the amplifier rating. The preamp stage comprises three 12AX7 tubes and one 12AT7 in the phase-splitter stage, driving a pair of 6V6s in a push-pull configuration.

What really sets this new design apart from its predecessor is the addition of a 1U 'studio' rack just below the main control panel, where you'll find a compressor, a stomp-style overdrive and Fender's 'Trans Impedance Power Attenuator', which lets you wind up the amp to achieve the required amount of output tube overdrive, but enables you to turn down the speaker level as low as you like — in other words, it is essentially a sophisticated power-soak. This circuitry replicates the way a hard-driven speaker reflects energy back to the power stage, which in turn modifies the feel of the guitar, so playing dynamics are not compromised by reducing level. When not required, this circuit may be bypassed completely. Reverb is provided by a tube-driven Accutronics spring (which sounds extremely sweet), and there's also a headphone output and a level-adjustable line output, with built-in speaker emulation for practising, recording or feeding to a PA system. There's a ground-lift switch to cut out ground-loop hum and a speaker output jack, which normally feeds the internal speaker but can be disconnected to allow alternative 8Ω cabinets to be used. This model also includes FX loop send and return jacks, plus a four-switch floor controller that is used to access the overdrive, compressor, reverb, and the FX loop bypass. The footswitches override the corresponding panel controls, and there are status LEDs above each switch.

The cabinet measures 420 x 510 x 280mm, weighing in at a hefty 21kg, and it is made from high-quality plywood, with the traditional Fender vinyl covering and grille cloth. As with many old Fender amps, the open-backed cabinet reveals the spring reverb tucked away in a vinyl 'bag' at the bottom of the cabinet, while a central slat shields the tubes. However, I'd expected a modern design to have a more effective physical barrier between the tubes and hands reaching up from the inside — especially as guitar players have a habit of using the back of the amp for storage and it is possible that the tubes could get damaged in transit by shifting 'cargo'. A perforated metal sheet would have been perfectly adequate.

The main control panel is very simple, with controls only for Volume, Treble, Bass and Reverb. The two input jacks offer a choice of two sensitivities, though they can be used together — in which case the sensitivity of both becomes equal. Input 1 is the most sensitive, and as a rule players will generally plug into this regardless of what pickups they have, on the basis that you can never have too much of a good thing.

While the main control panel is pure pedigree Fender, with its black knobs and red 'jewel' mains lamp, the studio panel below looks a little like an afterthought. I suspect this is deliberate, though, in order to 'distance' the solid-state stomp effects within from the all-tube signal path of the main amplifier. The overdrive is very conventional and tonally fairly neutral, so it can be coaxed into fitting most styles, using its tone control. The other knobs govern the usual drive and output levels. With just two knobs to tweak, the compressor offers control only over sustain and level but actually sounds spot-on, whether you're simply increasing the density of the sound or, at higher settings, adding a pedal-steel-like sustain. Both effects have bypass buttons but they can also be controlled from the floor unit, and when inactive they are completely removed from the signal path.

On a practical note, I feel that the knobs on the studio panel protrude rather too far, and could be vulnerable to damage. They could have been half the height or less without compromising usability. In fact, the Attenuator knob on the review sample had an intermittent fault, even though there was no damage to the packaging and no evident sign of trauma to the front panel.

Though an amplifier's sound is highly subjective, I rather like what this little amp has to offer. Using a Fender Strat to test the Princeton, its wiry tonality came over very nicely indeed, sounding bright without being hard or clangy, but still with the characteristic Fender 'pinginess'. At higher volume settings there's enough gain to coax a sweet blues sound out of the Strat's single-coil pickups, and this works particularly well if you turn the volume up full and use the Attenuator to regulate the actual playing level. 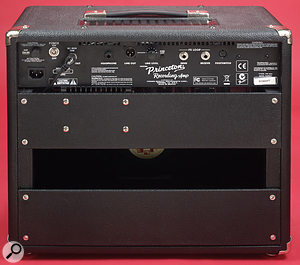 The recording output comes as a line-level XLR, and there's a headphone jack for monitoring the signal.Although the overdrive sounds pretty anonymous, in combination with the amp's own natural overdrive it works well enough for beefing up solos. It is effective for dirtying up the sound further for vintage rock sounds, and while it doesn't stray into metal or shred territory, I wouldn't expect it to on an amp like this.

Inevitably there's some background noise audible at higher gain settings, or when the compressor is being used, but this is no worse than for other tube amps and shouldn't be a problem in the studio, as long as you take care with the gain settings and gate high-gain sounds.

I felt that the compressor really improved the feel of clean or just 'on the edge' sounds, and though there are few controls, the attack and release characteristics seemed spot-on, producing the desired result without choking the life out of the sound or making it seem dull, as some compressors tend to do. The speaker-emulated output was surprisingly close to the natural sound of the amplifier, though I'd always opt for recording with a good microphone where possible. It does seem a bit odd to me that the headphone outlet has no level control, though, especially with the current levels of awareness about hearing damage. Similarly, there are no level trims for the effects loop ins and outs.

The Princeton Recording Amp delivers on both Fender tone and studio convenience, but it isn't exactly cheap, especially when you consider that the PVC cover is an optional extra. Cost aside, however, the Princeton does what it sets out to do rather well, with a very nice basic tone, a great spring reverb and a useful stomp-style compressor. And, unlike a modelling or solid-state amplifier, there's also the option of changing to a different brand of tube if you prefer a slightly different sound.

The overdrive is OK, though I'd probably still end up using my Tube Screamer in front of the amp in preference. The Attenuator works particularly well in maintaining the tone and feel of the amplifier at different power levels, so you save yourself the not-insignificant cost of a good power soak/speaker emulator, and the amp is still loud enough for gigs — even though you'd probably need to mic it up in all but the smallest venues.

On balance, I think Fender have managed to strike a good balance between a classic no-frills amp design and a modern studio-ready combo, and it should hold plenty of appeal for the recording guitarist who is in love with the traditional Fender amplifier sound.

There are few, if any, direct alternatives I'm aware of, though there are many hybrid designs that sound good and lend themselves to recording, not least the Vox AD range. There are also numerous good-sounding tube combos that can be used with an additional power soak to achieve similar results in the studio.

The Princeton Recording Amp blends the classic Fender small-amp tone with the convenience of built-in compressor, overdrive and Attenuator, as well as a speaker-simulated line out that can be used for recording.