Full-range monitors and large rooms aren't an option for everyone, and some of us even have to make do with no more than a computer desk for a studio. The new Fostex PM0.4ns aim to deliver better performance than a typical desktop monitor, and are available with various high-gloss baffle colours (red, yellow, violet, black or white). The rounded baffle edges reduce diffraction, and the low weight and compact size mean that wall-mounting is practical. 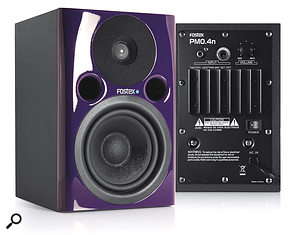 Conceptually, the PM0.4n is a conventional front-ported, two-way bass-reflex system, with a four-inch bass/mid driver (using an aromatic polyamide cone) augmented by a 5/8-inch soft-dome, urethane-film-laminated cloth tweeter. As you'd expect, there's limited low-frequency response: the published spec gives the -10dB points as 60Hz and 22kHz. A pair of 18W power amps drive the woofer and tweeter via an electronic crossover, and the distortion figure is quoted as less than 0.1 percent THD with the speaker running at 12W. The amp signal‑to-noise ratio is specified as better than 75dB, 20Hz to 30kHz (unweighted) — so although you can hear a tiny amount of hiss and hum if putting your ear to the speaker, it's nothing to worry about. The inputs are via balanced quarter-inch jacks and unbalanced phonos, and there's an input gain trim on the rear.

As you'd expect from such a small speaker, you don't get any really deep bass, but the low end still comes over as plausibly solid, albeit with a hint of a boxy bloom to it. The bass actually sounds tighter when the speakers are pushed a little harder, and although you can't get very high SPLs out of them, they're more than loud enough for desktop use, assuming they'll be within 60cm or so of your listening position.

The mids and highs sound well-balanced and smooth, turning aggressive when you present them with a mix that has too much top end. In other words, they 'tell it like it is'. Although lacking the clarity of focus of a really good monitor, they have the makings of good home-studio speakers, because if a mix sounds good on these it seems to travel pretty well. You have to resist the temptation to EQ anything below 90Hz, as it's not really possible to hear what's going on in the depths, but in other respects they represent a pragmatic balance between what we'd like and what's practical in a given space at this kind of price.  Paul White