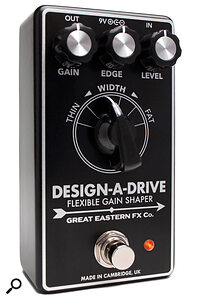 However much of a tube‑amp purist you may be, the chances are that you’ll have had to use an overdrive pedal at some point, whether to push an amp into its ‘sweet spot’ or to try to compensate for having to keep the volume down in some venues. Like many players, I’ve got quite a lot of overdrives, not because I want to have a lot of them but because I find that some combinations of pedal and amp work brilliantly, whilst others really don’t work at all. For years, the ‘classic’ recipe for many has been a Tube Screamer type, with the drive all the way down and the volume up, giving a bit of bass cut and a sizeable midrange hump — perfect for filling out the midrange cut inherent in many Fender amps, or really making a Marshall sing.

But what if your amp already has plenty of midrange and the right amount of bass cut on its drive channel? Best try another pedal. Maybe you can find one where the mid hump is tuned a little lower to give your amp a Dumble‑style push, or where the ‘tone’ control does something more than just roll off the treble. If, like me, you’ve got more amps than any sensible player needs, you’ll probably also have too many overdrive pedals, as well.

But that could be about to change. The Design‑A‑Drive from Great Eastern FX is the first pedal I have come across that allows you to really substantially tune its overdrive characteristics to match the requirements of a large range of amps. Yes, I know there are drive pedals with three‑band EQs, and internal tweak pots, but this is different... Using a six‑way rotary switch to set the midrange characteristic and a clever, complementary ‘highs’ control, results in something that’s both more effective and more intuitive in use than anything that has gone before, in my experience.

Housed in the ‘tall’ version of an MXR‑sized casing, the Design‑A‑Drive features just four controls, Gain, Edge, Level and Width, along with a true‑bypass footswitch and LED. Power has to come from an external PSU (9V DC, 10mA), via a standard 2.1mm barrel connector in between the two top‑mounted jacks, as there is no option for an internal battery. Inside, the circuit is straightforward op‑amp‑based overdrive with clipping diodes, like many other designs, with the one big difference that you’re not stuck with the midrange characteristic that the designer has chosen for you. The Width control’s six positions, labelled Fat to Thin, each offer a different combination of bass roll‑off and midrange hump, whilst the Edge control, operating higher than most ‘tone’ controls, allows you to balance the overall spectrum, generally using less with a Thin setting, and more with the Fat end of the control. Using a conventional pot for a bass/lower‑mids control would normally add a lot more gain as you turn it up, but the use of a rotary switch has allowed the designer to pre‑compensate for that, so you are not constantly adjusting gain at the same time as tonality. It’s clever, but it’s just part of what makes this a very intuitive design to use.

Yes, I know there are drive pedals with three‑band EQs, and internal tweak pots, but this is different...

The interaction of the controls and precisely what they are doing is really quite sophisticated, but you don’t need to even think about that as a player. They do what you would want them to do. This is a pedal you can dial‑in in seconds, by ear. And then do it again just as quickly for a different amp.

At full drive, there’s enough gain to get single‑coils distorting, with very nice clean‑up as you back off the guitar’s volume control, but there is a lot of subtlety to be had with the gain down and the level up, especially if you like to use drives pushing an amp that is already on the edge of distortion. The tone‑shaping capabilities of the Width and Edge controls are just as powerful in this mode: perhaps even more so.

Great Eastern FX Co made quite an impression with their Small Speaker Overdrive, favourably reviewed in these pages as well as elsewhere, and the Design‑A‑Drive will surely build on their reputation as an innovative designer of high‑quality guitar pedals that offer something new and different in a highly competitive market.