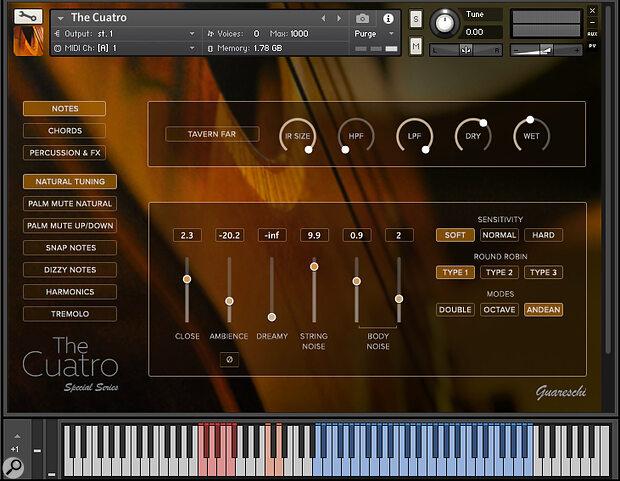 The Cuatro is the latest in a line of Kontakt‑based traditional instruments, emanating from South America, beautifully sampled and prepared by media composer Guillermo Guareschi. A Cuatro is a derivation of the Spanish guitar, but rather smaller in size and with only four strings. It’s not a million miles away from the ukulele or mandolin, but thanks to its more guitar‑like makeup, offers an arguably richer tone.

Guareschi is a guitarist himself. Couple this with his South American heritage and compositional background, and he’s an ideal candidate to piece together a Kontakt library of this kind.

The articulation sets fall into three broad categories; Note, Chords, and Percussion & FX. Providing just under 2.5GB of sample data, the largest category is the Notes section, which will be the port of call for more usual playing styles. The first available articulation within this set is Natural Tuning, which provides options for round‑robin behaviour, sensitivity, and ability to instigate octave and doubling capabilities. Sample capture extends to a number of mic settings. The Close mic fader provides depth, character and plenty of clarity, presenting a clear string pluck with deep body tone. The Dreamy capture provides a heavily reverberated colour, which feels a little superfluous, particularly as there is an option for onboard reverb elsewhere. However, the addition of independent faders for String and Body noise adds plenty of character. Defeating the other faders in favour of these, reveals all sorts of acoustic authenticity. Blend these elements alongside the initial Close mic signal, and you have an incredibly authentic sounding instrument, with a vast degree of realism.

While the Natural Tuning articulation is likely to be the main event for most, there are six further articulation types, ranging from Palm mutes and Snap notes, to Harmonics and Tremolo. They all bring further enhancement and realism to the Cuatro table, but with a vastly reduced number of settings available when compared to the Natural Tuning section. This need not be an issue; as you explore, it’s advisable to mix up the articulations, which is simple to do thanks to keyswitching, placed at the lower end of the keyboard. Moving between articulations is quick and seamless, and will add to the reality stakes considerably. The Tremolo takes the hard work out of strumming, and unsurprisingly sounds very authentic indeed.

...the addition of independent faders for String and Body noise adds plenty of character.

Staying with authenticity, the other two broad menu sections, Chords and Percussion & FX, provide similar one‑stop shops for relatively quick and bona fide results. The blend of strums available within the Chords section extends from staccato playing to elongated and more laid‑back affairs. Thankfully, the Close microphone setting remains intact when keyswitching from one articulation to the next, even across menu sections. To complete the overall palette, there’s an inclusion of pitched slides and guitar body slaps.

The Cuatro is a comprehensively put‑together collection of single‑instrument samples, which are playable and identifiable. It has pretty much everything you could need to inject a smidge of South American flavour into your production.