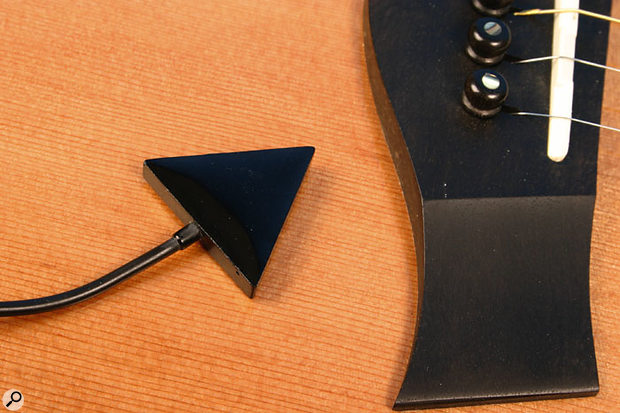 The Ehrlund Acoustic Pickup offers an intriguing new take on the ubiquitous piezo-based contact pickup. Described by its Swedish manufacturers as an "ultra-linear microphone", it is nevertheless a piezo pickup, albeit a relatively pricey (£185) triangular one.

According to the manufacturers, the pickup's unusual shape does make a difference. Something certainly does, for the Ehrlund sounds significantly more microphone-like than your average stick-on pickup. It is also a lot less fussy about how it is terminated (the input impedance of whatever it is plugged into) than most piezos. Normally, I would expect to have to terminate a piezo with a minimum of 2MΩ (ideally, 5MΩ) to get the maximum power transfer and full frequency range out of it. That is one reason why piezo-equipped guitars invariably have on-board preamps, placing a buffer stage as close as possible to the pickup. The Ehrlund seems perfectly happy feeding slightly less than 1MΩ, so something other than just its shape must be different to 'normal' piezo pickups.

Piezos are characterised by their non-linear dynamic response and this is partly where the infamous 'piezo quack' associated with under-saddle pickups comes from. The Ehrlund seems to display a significantly more natural dynamic response. Talking with the manufacturers elicited only guarded references to the potential for some kind of beneficial interaction between waves reflected from the three sides of the triangle, if I understood correctly. However it's done though, the result is a piezo that doesn't sound too much like a piezo.

Placement is everything with a contact pickup and the Ehrlund is no exception. Experimenting on the outside surface of an acoustic guitar, just above and behind the bridge, it is easy enough to find a number of viable positions. For a permanent installation, you would obviously want to fit the pickup inside the guitar, where positioning options will be more restricted by the bridge plate and bracing. The pickup doesn't seem to work well mounted on the bridge plate itself, but just in front of it, or just behind (towards the bass side, not the treble, interestingly) I found it produced a balanced output in both a small-bodied Gurian and a slightly bigger, more heavily braced Avalon.

Some of the best results came from combining the Ehrlund with either a microphone or a traditional under-saddle piezo pickup. The latter proved particularly effective on classical guitar, which is always very poorly served by an under-saddle alone. Used with a mic, the pickup can be subtly blended in to provide low-level detail and an immediacy that complements the mic's broader perspective. The Ehrlund's more natural dynamics (as compared to other piezos) seem to help it combine well without becoming too prominent.

The pickup itself is highly immune to feedback, but any form of soundboard transducer is always at the mercy of the resonant surface that it is mounted on. It is the guitar itself that feeds back, with the amplified sound driving the guitar's top into oscillation, rather than the pickup detecting its own output. On smaller instruments with a smaller soundboard area, such as violin and mandolin, this is less of a problem and the Ehrlund really shines in these applications.

Of course, we'd all rather use a nice mic in a good room, but recording acoustic guitarists are always looking for better alternatives to the pickup systems currently available, to help overcome compromised acoustics or spill from other sources. The Ehrlund pickup (however it works!) is a really useful new option in the studio toolbox and just might be the start of a significant new line of development.

SUMMARY: No contact mic is ever going to sound quite like a properly placed microphone, but a smooth, extended frequency response and more linear dynamics are a good start. The Ehrlund pickup is by far the most microphone-like contact transducer I have encountered so far.  Dave Lockwood

My reference to 'compensating networks' on electric guitar volume controls in the review of the Terratec Hi Jack in last month's issue led to some enquiries for more information. I was referring to the technique of adding a capacitor, sometimes with a resistor as well, between the input and output lugs of a guitar's volume pot in an attempt to compensate for treble loss as the control is turned down. All passive guitars display this effect to some extent as the resistance of the pot combines with the capacitance of the guitar cable to form, effectively, another tone control. 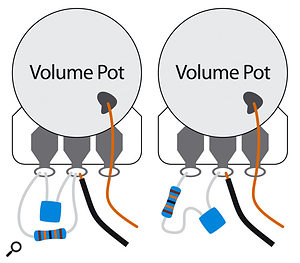 Of course, this won't bother you if you permanently leave your guitar's volume control flat out, and I know some players who actually even prefer the mellowing effect of turning the volume down for rhythm parts and then getting a bit more bite when they turn up for a lead line. But players who use their volume control a lot do tend to be bothered by it and there are a couple of simple DIY techniques for dealing with it. They all involve the addition of capacitor, generally around 0.001µF, between the two 'signal' terminals (in other words, not the grounded one) of the volume potentiometer, effectively allowing some high frequencies to bypass the pot when it is partially turned down. Fender incorporated this as standard in Telecasters from the mid-'60s right up until the reissue models started, but using the cap on its own actually has the effect of making the sound progressively brighter as you turn the volume down, rather than just keeping it the same at all levels. The addition of a resistor (about 150kΩ if the pot is 250kΩ) in parallel with the capacitor (as shown on the left of the diagram below), keeps the treble better balanced all the way down, but affects the overall pot taper, making it more linear. I happen to like this side-effect, but not everyone does.

If you put the resistor in series with the capacitor (as shown in the diagram), rather than in parallel, you can maintain a more traditional logarithmic volume taper, but you will need to fine-tune the resistance value to achieve an even treble taper. The resistor is now determining how much of the capacitor's 'treble bleed' is allowed to bypass the pot when it is partially turned down, and I find the value generally needs to be between 100k and 150k, depending on the effect you want.

All of the rule-of-thumb values given above are for single-coil pickups and 250k volume pots. I have yet to find a network for use with 500k pots and humbuckers that gives enough compensation in the middle of the pot and yet doesn't give too much treble when turned further down, which is worse than no compensation at all as far as I'm concerned. The audible effects of passive control networks on electric guitars is a fascinating area of exploration, and one that is capable of making a fundamental difference to the performance of an instrument. Dave Lockwood 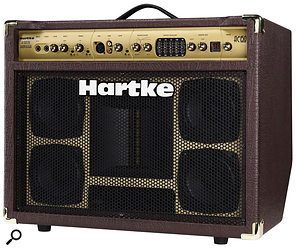 Best known for their bass amps, Hartke have introduced a pair of amplifiers for acoustic guitars. The AC75 and AC150 are pretty unusual too, in that they feature a 2x4-inch ribbon tweeter, backed up by conventional five-inch full-range drivers and housed in tuned, ported enclosures. The ribbon driver is intended to add clarity to the acoustic guitar's vital high frequencies and overtones. The AC75 uses a 75W bi-amped design, with 50W powering two five-inch drivers and 25W powering the ribbon tweeter. The AC150 (pictured above) uses a tri-amped design, with four five-inch drivers arranged in stereo with 50W per side, and 50W powering the ribbon tweeter. The two-channel amps provide active and piezo instrument inputs on channel one and XLR microphone and RCA line inputs on channel two. There's a five-band graphic EQ, a built-in 100-preset 24-bit digital effects processor that can be routed to either channel and a variable notch filter to tackle feedback. The amps also feature an effects loop and XLR direct outs to feed a mixer. The AC75 costs £399 while the AC150 costs £499. Both will be available in the spring. 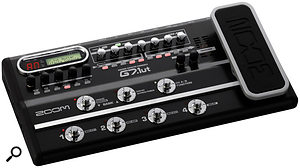 The latest floor effects processors from Zoom are the G7.1ut and G9.2tt. The units feature 24-bit/96kHz A-D/D-A converters and combine DSP modelling with tube processing, courtesy of Zoom's brand new 32-bit ZFX3 chip and the 12AX7-equipped Energizer circuit respectively. On top of lots of amp and effect modelling options, there are two channels per patch, handy for quick channel switching during live performance, and the amp- and drive-modelling blocks have two dedicated algorithms, one designed for live use and one for direct recording. This means that you can take the same sounds you use for practice and recording onto the stage. Both units feature analogue-style controls, footswitches and an expression pedal, but the G9.2tt has an additional '3D Z-pedal' which detects sideways movement as well as conventional up-down pedal movement. That's technically only two dimensions, but it's a unique feature, allowing the user to assign up to four parameters to each axis, so we'll overlook it! Both units are also equipped with a USB port allowing them to function as audio and MIDI interfaces, and come with a copy of Steinberg Cubase LE and Zoom's own editor/librarian software. The G7.1ut costs £249.95 and the G9.2tt costs £329.

The new G Sharp rack processor from TC Electronic offers a simplified and affordable route into the world of TC reverb, modulation and delay effects. The G Sharp's name is clearly intended to remind us of its heavyweight forebears like the G Force and, more recently, G System, but the new unit is a rather different proposition. It has two DSP engines, one dedicated to reverb, the other to modulation and delay effects, each of which provides 15 preset effects carefully voiced for a variety of applications. Though the presets are fixed, the two effects can be adjusted — there are pre-delay, decay time and filter controls in the reverb section and delay time, feedback and tap tempo controls in the modulation/delay section, plus global controls for the input level, dry/wet mix and balance between the two effects. The G Sharp has 99 user and 256 factory presets and can be controlled via MIDI or a footswitch, and there are stereo analogue and 24-bit S/PDIF inputs and outputs. The unit is expected to cost around £199 when it goes on sale in April, which sounds like great value if you can live without the more advanced programmability of the G Sharp's more expensive predecessors. 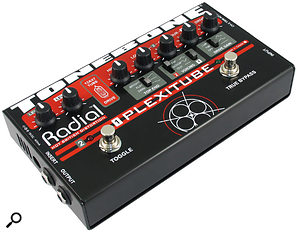 The latest addition to the Radial Engineering Tonebone range of effects has a distinctly British flavour. The Plexitube is a hybrid tube/solid-state distortion unit designed to deliver a wide range of Marshall-esque tones. It has two separate channels tailored for rhythm and lead sounds, each with independent level, voicing and EQ contour controls. The Plexitube also features true bypass switching and, unusually, an effects loop. It costs £269.