These days, manufacturers seem obsessed with sticking USB sockets on anything that comes to hand, so I was half expecting ESI's Jam Mate to be a USB-equipped piece of toast. In fact, it's an electric guitar that can be connected directly to a Mac or PC's USB socket. 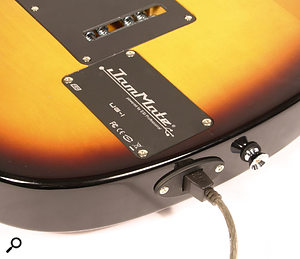 At £169.99, it's at the affordable end of the guitar spectrum, and the instrument itself is best described as a decent beginner's model. It has a very light wooden body with a rather garish yellow sunburst finish, a floating-bridge vibrato, three single-coil pickups in a Strat-style configuration. The 25.5-inch scale length neck has a pretty reasonable fret job and a good lowish action out of the box. The Jam Mate is supplied with a very generous selection of extras including spare strings, a strap, a gig bag, a pair of headphones, and both jack-to-jack and USB cables.

You can use the Jam Mate as a normal electric guitar, but hidden away next to the strap button is a deeply recessed USB socket (pictured right), which does a surprisingly good job of retaining the connector; I had been worried about the possibility of accidentally disconnecting the thing, but it's no more of a risk than is the case with a normal guitar lead. However, it does stop you standing the guitar on its end, which is a nuisance. When used in USB mode, the quarter-inch jack socket acts as a headphone amplifier, so in theory, you don't need any other audio hardware to record to your Mac or PC.

Under Mac OS X, the Jam Mate is class-compliant and shouldn't need additional drivers; these are needed on the PC, but the installation process is painless. Once up and running, you get a choice of sample rates up to 48kHz, and buffer sizes from 80 (Windows) or 64 (Mac) to 2048 samples. For the most part, the default 128-sample setting worked pretty well on my Windows machine, though I did notice one or two dropouts, and I was able to run it at 64 samples with no problems at all on the Mac. A cut-down version of IK Multimedia's Amplitube amp simulator is supplied, but the Jam Mate driver also shows up as an option in other ASIO-compatible applications, and I was able to use it in Native Instruments' Guitar Rig 2 without problems.

It wasn't all roses, though. On my Windows laptop, the Jam Mate was very noisy when connected via USB, and the added noise was much more intrusive than the usual hums and buzzes: it was a full-frequency hiss that was easily audible over the top of whatever note or chord was playing, so noise gating didn't really help. This didn't happen on my Mac, so it's clearly not a fundamental fault with the guitar, but I never managed to isolate the cause.

The Jam Mate's existence begs the question 'Who needs a USB guitar, anyway?', and I imagine the concept will be most appealing to guitarists who are dipping a toe in the waters of computer audio for the first time. Anyone who's half serious about recording is likely to need a more comprehensive interface that can accept line and mic inputs, but the Jam Mate certainly provides a neat way of jamming along to iTunes, and a laptop is a lot more portable than most guitar amplifiers. Sam Inglis

SUMMARY: It's a guitar. With a USB connector. 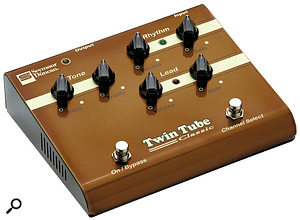 The latest offering from Seymour Duncan is not a pickup but a stompbox, the Twin Tube Classic. This two-channel guitar preamp uses a pair of NOS (new old stock) subminiature Philips 6021 dual-triode vacuum tubes, providing up to 90dB of gain. Its Rhythm and Lead channels each have Volume and Gain controls and there are global Bass and Treble tone controls, and bypass and channel selection footswitches. The Twin Tube Classic runs off a 16V AC mains transformer and uses a toroidal transformer to supply the high plate voltage required for the valves to work properly. It'll be available in June and costs £199.95. 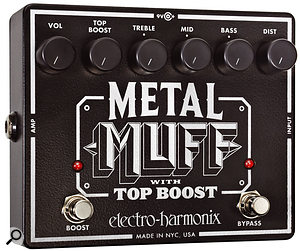 Also new this month, the Metal Muff (£69) is the latest distortion pedal from Electro-Harmonix. It provides up to +18dB of gain and has an additional, switchable top boost circuit with it's own level control. The usual Volume and Distortion controls are accompanied by a three-band EQ. A second new addition to the Muff family, the Little Big Muff (£49.95), is a compact overdrive pedal with Sustain, Tone and Volume controls and a sound that apparently sits somewhere between the US- and Russian-made Big Muff effects [That's enough Muff — Ed]. A third new pedal, called the Hog (£299), is a sophisticated polyphonic octave generator and guitar synth effect. Along with two envelopes and a resonant low-pass filter, the Hog allows you to mix ten different pitch intervals (original pitch, one fifth up, one octave up and so on) via ten faders, promising perfect polyphonic tracking. You can also connect an expression pedal — the Hog's seven different Expression Modes include pedal control of pitch, filter frequency and volume. All three pedals should be available by the time you read this.

The new Hughes & Kettner Switchblade is a fully-programmable four-channel valve amp with built-in digital effects. The four independent channels — Clean, Crunch, Lead and Ultra — are controlled by a seemingly conventional set of knobs, but up to 128 presets (incorporating gain, master volume, EQ and effects settings) can be stored and recalled via MIDI or using the included footswitch. As well as the on-board digital reverb, delay and modulation (chorus, flanger or tremolo) effects sections, there's an effects loop for an external processor. The 100W Switchblade 100 Head uses two 12AX7 preamp valves and four EL34s in the power amp. It's available now and costs £1049, with 50W, 1 x 12 and 100W, 2 x 12 combo versions equipped with Eminence speakers on the way.

Can a power soak really give you 'loud tone' without volume?

Using a 'power soak', or speaker attenuator, allows you to turn up a guitar amplifier to the point where it produces its optimum distortion and compression, but then regulate the actual volume of the loudspeaker(s) it is driving. In the home studio, where volume levels may be restricted, this allows you to still record using valve (tube) output-stage distortion. There's no point in using a speaker attenuator with a solid-state amp. You might as well just turn the amp's master volume down, as there are no tonal advantages to running a solid-state amp at high volume. You might get some speaker compression and cone break-up, and you'll get some interaction with the guitar if you are in the same room as the speakers, but that's all.

To provide independent regulation of speaker volume, the power soak needs to be patched in between your amp and its speakers and must incorporate a 'dummy load', consisting of a number of large resistors, so that the power from the amplifier has got somewhere to go when it's not going into the speaker. Instead of being turned into sound by the motion of the speaker, it will be turned into heat and safely dissipated. If you run a solid-state amp with no 'load' (ie. no speaker connected), it will see it as an infinite impedance, which just reduces the amp's output to zero. Drive a valve amp into no load for even a few seconds and you could be looking at a very large repair bill. 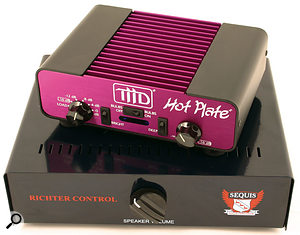 It is very important for the health of the amplifier that the dummy load section of a power soak should have an adequate power rating and also replicate, as far as possible, the exact load that the amp was designed to drive. This is why power soaks often have one specific impedance that they are designed to work at — 8Ω, 16Ω and so on. To operate at high levels without risking damage to the amplifier a power soak must also replicate the 'impedance curve' of a real speaker — loudspeakers do not present a constant load at all frequencies; the impedance rises at high frequencies and there is always a peak at the resonant frequency. Although some early designs of power soak were purely resistive and led to frequent amplifier breakdowns, any reputable modern design will now provide an appropriate 'reactive' load, like a speaker.

There is, in practice, a limit to how far you can attenuate the amp/speaker link and still have it produce a desirable quality of output. THD's renowned Hotplate attenuator (www.thdelectronics.com), which has one of the better reputations in this field, actually incorporates the speaker as part of the total load and its smaller attenuation settings — -4dB and -8dB — sound quite acceptable. As attenuation is increased, it becomes necessary to utilise the on-board EQ switches to boost lows and highs, then when you reach the full dummy-load setting which allows attenuation right down to zero, the sound becomes so limited at both frequency extremes that you probably wouldn't want to record it anyway. The Richter Control attenuator, from UK manufacturer Sequis (www.motherload.co.uk), utilises a different design that gives it a slightly more open sound at very high attenuation settings, but it can only pass a maximum of 50 percent of the input to the speaker.

It is possible to achieve really good recorded results with attenuators, but the key to making the most of them is to recognise the point at which they are doing more harm than good. A major part of the sound of a loud electric guitar comes from the electro-mechanical behaviour of the speaker and its interaction with the amplifier's output transformer. At very low levels, neither of these will be occurring in anything like the same way, so it is not really surprising that it doesn't sound the same. If you find yourself having to attenuate your amp beyond the point where it sounds good, try using a full dummy load setting and then take a DI signal from the attenuator out to a speaker simulator, in either hardware or software. This will often sound far more real than an over-attenuated speaker. Alternatively, feed the attenuator into a different speaker to the one you normally use. A small speaker driven hard will invariably sound much more authentic on distorted guitar than a large speaker barely working, and with the attenuator you can set the exact power level where cone break-up starts to occur. Dave Lockwood