Have you ever wished that artists could control their own monitor mixes? With this system they can, whether on stage or in the studio. 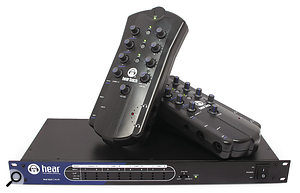 One of the most frustrating things when engineering in the studio is trying to get the headphone monitor mix exactly right for each of the performers that you're recording. In fact, when an artist is being particularly picky, it's often tempting to ask them why don't they set up their own ****ing monitor mixes! Well, with Hear Technologies' Hear Back system, you can do exactly that — but you won't need the expletives!

The Hear Back system and the concept behind it isn't new. There are already several personal monitor systems on the market, but the way in which this one is implemented is very impressive, and this is the first chance I've had to test such a system for studio use. Essentially, it provides multiple performers with their own custom headphone mixes, which they can adjust to their liking using their own remote mixer. The personal mixers may be screwed to the end of a mic stand, or you can buy an optional bracket that lets it clip on to the side of the stand.

A master level control is used to adjust the overall feed to a pair of headphone outputs on each mixer, and the latter are electronically protected against short‑circuited headphones or cables. An ingenious connection system allows the personal mixers to be set up a long way from the central 'Hub' — the heart of the system, which supplies the various mix elements to the mixers — and this means that the system should be equally useful on stage and in the recording studio.

Individual mixers give the performer control over a monitor mix comprising up to ten separate signals.

Housed in a 1U-high metal rack case, the Hub has all its connections on the rear, with just basic level metering and input selection on the front. Simple three‑LED meters monitor the input levels, with the top LED signifying clipping. A three‑way slide switch selects which input source is being used (ADAT, Analogue or Hear Bus — more on that in a moment). There's also a clock status LED and a mains power switch.

The Hub supplies both an audio signal and power to a maximum of eight mixers via a standard CAT5e cable. In more demanding situations, where more mixers are needed, it's also possible to daisy‑chain Hubs via their 'Hear Bus' in and out ports to create larger systems. Each Hub is fed from up to eight separate analogue or digital audio signals: there are six mono and one stereo balanced analogue inputs, all via a Tascam DA88‑format 25‑way D‑sub connector; and the hub can also receive an eight‑channel ADAT signal, which is immensely useful if you're using one of the many audio interfaces that include one or more ADAT expansion ports. There's a further mini‑jack stereo aux input on the left side of each personal mixer, which gives the performer control over a mix of up to 10 separate tracks in total.

Internally, the circuity includes 24‑bit A‑D converters, and the ADAT input can sync to 44.1 or 48 kHz sample rates, but there's no S/MUX option for higher sample rates. The designers claim the conversion delay and transmission delay between input and mixer is less than 1.5 milliseconds.

When you're working in the analogue domain, you'll probably want the inputs to come to the Hub from the aux send or monitor matrix outputs of a mixing console, whereas in a software DAW‑based setup, you'd probably be better off setting up pre‑fade aux buses in your software to feed spare audio interface outputs to the Hub.

For large-venue applications, distance between the stage and engineer often becomes an issue, and for these situations an optional Extreme Extender ADAT In/Out unit is available, which converts ADAT optical signals to the HearBus wired format. This should allow transmission over a distance of up to 500 feet, though I didn't have the opportunity to test that, as there was no Extender included in our review system. The Extender operates from a power adaptor, and an ADAT Thru output provides a buffered connection to local ADAT devices. Its ADAT Out converts a CAT5e HearBus signal back to ADAT optical, and two parallel optical outputs are provide to allow the driving of two separate ADAT devices.

When I unpacked the mixer that came with the review system, the box was so light that I wondered at first if there was anything in it! Each slim plastic pod has eight rotary controls plus a master volume at the bottom centre of the panel. A recess in the base of the unit houses and protects the RJ45 connector (for the CAT5 cable), and there's also a US (5/8‑inch) brass-threaded insert, for mounting on a mic stand. The Link buttons between channel pairs 3/4, 5/6 and 7/8 allow pairs of channels to handle stereo inputs panned hard left and right (with level control from the left knob) and there's also a bus status indicator LED to confirm that the correct input signal and power is being received via the CAT5e cable. If not linked, the monitor sources for channels one to six all appear in mono, panned centrally.

Channels one and two are always stereo and so are controlled by a single pot, the idea being that this will probably carry the main mix, to which you can add those elements you need to hear most. The pot to the right of the channel 1/2 level knob sets the threshold of an on‑board DSP limiter, and there's an LED to show when limiting is taking place. Oddly, this operates prior to the master volume control, which means that you can still turn the headphone level up rather too high for safety if you get carried away.

There's a pair of quarter‑inch headphone jacks on the right‑hand side of the mixer, with associated red fault warning LEDs. There are also left and right line‑level outputs on the mixer, presented as separate balanced quarter‑inch jacks, and this allows a performer to feed a powered monitor, as is likely to be the case during live performance, or perhaps to feed a multiple-output headphone amp in the studio. Plugging into just the left line out gives a mono mix of the mixer output, which again will be useful for powered stage monitors. As far as the user is concerned, that's pretty much it — there may be a lot of fancy technology inside the boxes, but using them couldn't be easier. 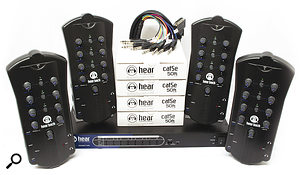 The 'Four Pack' bundle, which includes four mixers, one hub and all the necessary cables.

The 'Four Pack' I received for review contained four mixers, one hub and all the necessary hook‑up cables, including a DA88 multi-core analogue audio cable, but it's also possible to buy all the parts separately if you want to build a system to your own specification. Setting everything up turned out to be plug‑and‑play simple, although it's worth noting that because there are no input level controls on the hub, you have to adjust the level at source, with a view to getting the centre LED on most of the time but without hitting the clip LED.

While analogue sources need only balanced line outputs to feed them (TRS jacks are on the far end of the included DA88 cable), I found the ADAT option to be more practical in a studio setup. You'll need an audio interface with an available ADAT output port, of course: I used a MOTU 828MkII for these tests, and with one optical cable linking this to the Hub it all worked right away, with nothing to adjust other than to select ADAT as the source using the hub's front‑panel slide switch.

Using Logic as my host DAW, I set up eight pre‑fade send busses at unity gain and routed these to the MOTU's ADAT output channels — and up came my monitor mix, loud and clear. The headphone amps seemed more than happy to deal with any of my studio headphones, and remained clean long after my ears had said 'enough'. In fact, the technical spec of this system is very impressive, so neither sound quality nor quantity should ever be an issue.

There are just a couple of points to watch. First, that limiter setting, which comes before the headphones master volume. Once you've set your basic monitor balance, you can bring down the limiter threshold (a blue LED winks when the limiter is operating) to prevent it getting any louder, but you're still free to turn the overall mix level up or down using the master control. This arrangement will prevent you getting any nasty surprises if one of the inputs suddenly shoots up in level, which is useful in itself, but it won't prevent you turning the overall phones level up more than is good for you, which is a shame. The other point is to ensure that all the mixers are plugged in before you power up the hub. If you don't, the connection between the hub and mixer doesn't always establish itself, so I would not recommend hot plugging.

The system works so well and so simply that it is hard to find much more to say about it. It does exactly what it claims without fuss and it delivers extremely loud, clean audio quality. Once you've created a basic DAW template to include the necessary monitor feeds, configuring for a new project is simple, while on the musician's end of the cable, setting a working balance couldn't be easier. While not a cheap option for a bedroom studio, the Hear Back system makes a lot of sense for commercial studios, and it really is very straightforward in use.

This is the first system of its type that I've tried, and I can't think of any alternatives that accept both an analogue and an ADAT optical input.

The Hear Back is a solidly designed system that does exactly as intended with minimum fuss. I particularly appreciate the ADAT input option, and I also like the way the system can be expanded by adding modules.