With systems getting ever cheaper, there's never been a better time to explore personal monitor mixing. Here's our selection of current options! 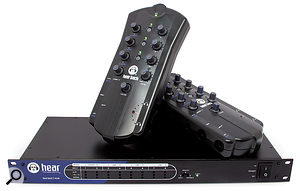 The Hearback is a two-part system, comprising the Hub, a 1U rack that accepts eight channels of analogue or digital audio, and the Mixer, which connects to the rack via a standard Cat5 cable (the price shown above is for one of each). Up to eight controllers can be connected to a single rack, and each rack has two headphone outputs, allowing one system to cater for up to 16 in-ear monitors with eight independent mixes. 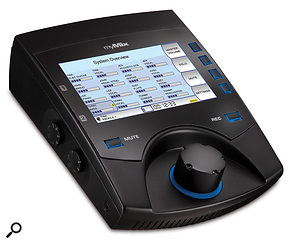 The MyMix controller is intended for connection to the company's expander boxes (the price given above is for a single mixer and the 16-line-input IEX 16L). The mixer unit can add reverb and delay, and features a four-band parametric EQ for each channel. An SD card slot allows for full multitrack recording of 16 individual channels, plus the stereo mix, at 24-bit/48kHz. 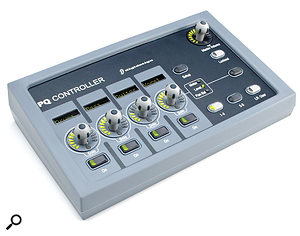 Designed for use with Avid's D-Show and Profile consoles, the Personal Q system comprises the PQ Controller (pictured) and the 1U PQ Rack (the price shown above is for one of each). This system is unusual in that it allows both the artist and engineer to work on the same monitor mix at the same time, in case the artist needs a little help. 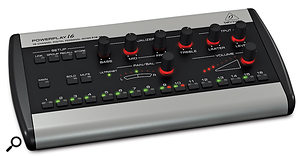 The P16M provides control over up to 16 channels, via a 'channel-strip' style interface. It uses Behringer's proprietary Ultranet audio network, which allows it to connect directly to the X32 range of digital consoles. Alternatively, you can use it with one of Behringer's rackmount interfaces, such as the P16I (£199$299). 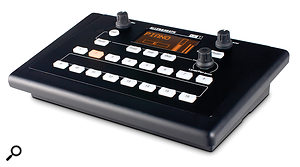 The ME1 is capable of mixing up to 40 separate signals. Although it's obviously intended for use with Allen & Heath's digital consoles, including the GLD and iLive ranges, it is also compatible with various popular audio-networking protocols, including Dante, MADI and EtherSound, and so can also connect directly to a number of third-party digital consoles.

The E32 can be fed either from one of Pivitec's rackmount audio-over-Ethernet distribution boxes, like the 16-channel E16I ($967), or from any digital Yamaha console fitted with a Pivitec E16IO MY card ($660). It has no controls of its own, but can be driven using an iPad or iPhone. 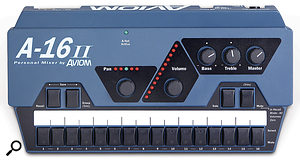 The A16 II takes its audio from one of Aviom's distribution racks, priced from £1155$1195 (the price above is for one mixer and a 16-input AN16i). Designed for reliability and ease of use, it has control over volume, mute, pan and bass/treble. 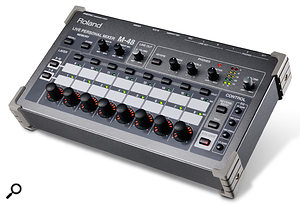 The M48 uses Roland's proprietary REAC digital-networking protocol, and can accept up to 40 channels in 16 groups from a Roland M-series digital mixer. It can also work with any MADI‑equipped console when used with Roland's REAC MADI Bridge. 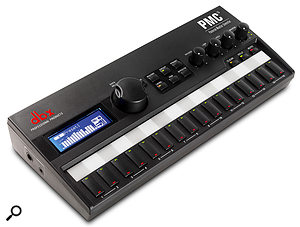 The 16-channel PMC16 uses Harman's proprietary Blu-Link network, as found in the Dbx TR1616 interface, or it can connect directly to Soundcraft's Si-series digital consoles thanks to a new expansion card. It includes genuine Lexicon reverbs, and a Dbx limiter for safe operation with in-ear monitors.

Performers are often the hardest people to please when it comes to sound on stage — so why not let them create their own monitor mixes?

Personal monitor mixers are a fairly recent phenomenon, brought about by the proliferation of digital mixing in the live-sound environment. Traditionally, stage monitors at large concerts have been mixed by a monitor engineer working on his or her own desk, separate from the front-of-house mixer. Although both the FOH and monitor mixers would be working with the same sources, the signals from the on-stage mics would be split into two, normally using a splitter, or sometimes with the monitor desk's direct outs being being sent on to the main console — pre-fader, of course, so that the monitor mixer's tweaks don't affect the front-of-house sound. At smaller gigs, things might be even simpler, with the whole system using just one desk, and the FOH engineer also controlling the monitor mixes using the console's auxiliary buses. 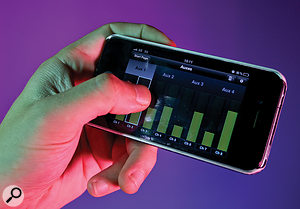 There are now many iOS apps available, such as this QMix app from PreSonus, that works with their StudioLive mixers and lets performers adjust their own monitor mixes using iPhones and iPads.

In either case, mixing monitors always involved a little trial and error. During a soundcheck, the person in charge of the monitor mixes would likely start off with a basic mix of all signals feeding the monitors a healthy amount. From there, band members would have to communicate any changes they wanted to the engineer — usually via a combination of shouting and basic hand signals! It would then be up to the engineer to interpret and then accommodate any changes (the most often request being "More me, please!”) while avoiding feedback. Clearly, this wasn't an ideal arrangement, but before live-sound systems started making the switch to digital, it was pretty much the only way to achieve independent mixes for the various on-stage speakers and the main PA.

The idea of performers being in charge of what they hear makes an awful lot of sense. Indeed, larger recording facilities have implemented this for some time with headphone foldback mixes, but the practicalities of analogue audio made it nigh-on impossible in a live-sound situation. The number of heavy and cumbersome multicores needed, not to mention mic splitters and separate mixers for each performer, all but rendered personal monitor mixing in the analogue domain impossible.

All that changed with digital, however. The ability to send vast numbers of channels down a single Cat5 cable lead to the development of the kinds of systems you can read about on the previous pages. Using just one splitter, mic signals could be connected to a distribution box, which would then send a full set of channels down several Ethernet cables, with each performer having their own 'terminal' with which to mix their monitors or in-ear systems. The fact that the performers' mixers were also digital meant that they could be made very compact — most personal monitor mixers are little larger than a tablet computer, and can be mounted discretely onto a mic stand. Finally, musicians playing on stage wouldn't have to worry about whether their monitor engineer could hear them pleading for more volume, or could interpret their frantic arm-waving!

Apps To The Future

But the evolution of personal monitor mixing didn't stop there, and Apple's now ubiquitous iPad has a lot to answer for. When companies like PreSonus started developing digital consoles that could be controlled via WiFi, engineers delighted in their newfound ability to mix a concert while walking around the venue to check for consistent coverage. It wasn't long before performers got in on the act, and there are now several digital consoles available that allow multiple iPads to be connected, with each one being capable of controlling a different auxiliary mix. This technology has now advanced to the point where tech-savvy performers can apply their own EQ and compression to sources, and where front-of-house engineers can 'lock' certain features away from performers, to prevent musicians from tampering with other performers' mixes.

Indeed, some mixer manufacturers have even developed 'more me' apps for the iPhone and iPod... So if you're using a WiFi-enabled digital console, you might even be carrying a personal monitor mixing system in your pocket already!