Tips For Keeping Musicians 'In The Zone' By Neil Rogers 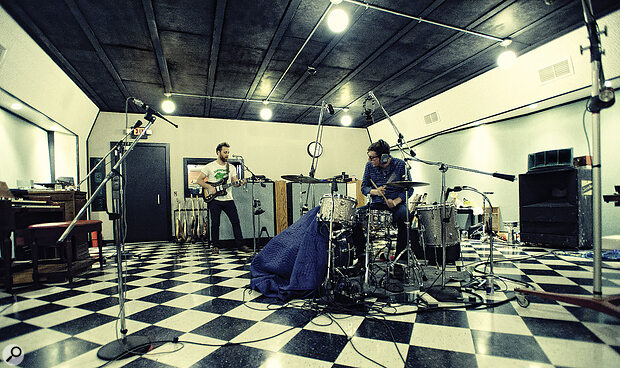 At some indefinable point in the past, I completed my transition from drummer to engineer, and while I still lay down parts when clients need them, I stopped thinking of myself as 'a musician' long ago. But last year I was invited by a client (who I'd played drums for on one track) to drum on their latest album. It was a useful experience: being in a different studio (StudiOwz in Pembrokeshire), with someone else engineering, reminded me what it is about recording sessions that helps or hinders performers. With that experience in mind, here are 10 ways I think engineers and studio owners can ensure the studio works as well for the musicians as it does for themselves.

Recording sessions can be long. If working with a band you might not need all the artists there simultaneously, and they might or might not want to hang around while you're recording their bandmates. You can't plan a session down to the last minute — recording doesn't work that way — but if you know you'll be setting up the drum sound all morning and the guitarist and vocalist are free to do what they want until early afternoon, let them know that, and tell them when they need to be back. 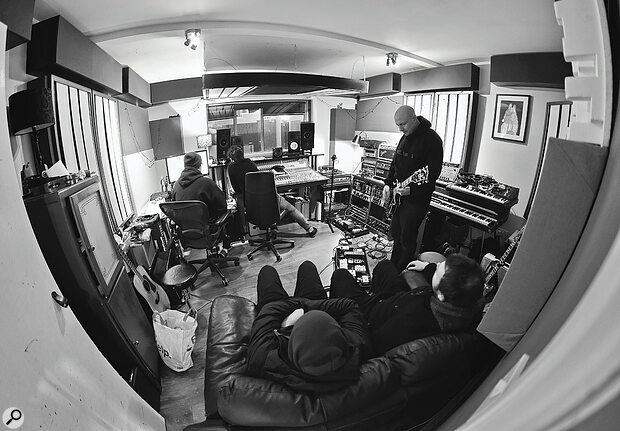 Just because you can do things fast doesn't mean you should. You certainly don't want to move so fast all the time that the session feels hurried. A good engineer should know when to suggest a little break, how much time to spend indulging an artist's new idea, and when to slow or quicken the pace more generally. It's about finding the rhythm for a particular artist or session that helps get the performance in the bag. So learn your tools and prepare in advance: that way, you can choose when to work quickly and when to back off the pace. You'll be in control, and you'll also be seen to be in control, which will boost everyone's confidence.

You'll have a talkback mic in the control room, but how will the artist talk to you? It's easy enough with a vocalist (use the vocal mic), but you don't want other performers to have to keep repeating things because their voice is faint, or to shout, or stretch to reach a mic (potentially moving things as they do!). So have a listen mic or two set up in the room which can pick up what the artists are saying. An instrument or room mic might double up for this purpose, but with a dedicated mic you can add a compressor to make it easier to pick up artists from further across the room. Just be sure not to feed this signal accidentally into the cue mix! Record it, and as a bonus you'll have a record of their reaction after each take.

What an artist hears in their headphones has an impact, and engineers should strive to make what the performer hears inspire them to deliver a great performance. Modern tools make it easy to set up decent monitor mixes, so take the time to learn that side of things like the back of your hand. But also try to understand what sounds and effects in the headphones will really help. For the StudiOwz drum session, I was playing a great-sounding kit (so great I bought it!) in a great-sounding room. Though you can hear drums while playing, they always sound different at the playing position to out in the room. The engineer made a point of feeding some of the room mics into my cans. Knowing that my performance sounded good in the room gave me a real boost, but these mics also gave me a better sense of the internal balance and the depth and power of the kit, which helped me to avoid overplaying. 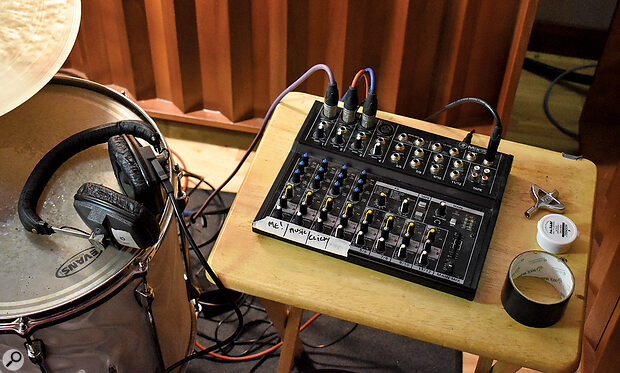 This advice isn't unique to drums. A lot of guitarists seem more comfortable recording in the live room with their amp and effects than playing to speakers in the control room. Committing to sounds created with pedals or outboard equipment can terrify new engineers, I know, but recording isn't just about capturing neat and tidy files that you can create something with at the mix stage, so it can be worth taking the 'risk', and you can always capture a dry insurance signal. When it comes to vocals, having a few obvious effect options to hand for the monitor mix can be useful. A slap delay and a short reverb can often help a singer get into things. 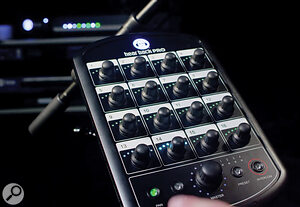 Some musicians like to have control over their monitor mix. I certainly do. The most basic requirement is to be able to set the volume in my headphones, but ideally I'd have a simple, clearly labelled headphone mixer that allows me to balance just three signals: my own performance, all the music and the click track. That way, I can set a comfortable balance without having to discuss every detail with the engineer. With some musicians, there's only so much back and forth you can do before they start to feel uncomfortable asking for yet another small change. Sadly, headphone amplification is one of the corners most often cut when setting up a studio. There are a few ways to set up multichannel monitoring systems, ranging from bodge-jobs with small mixers, to smartphone-controlled systems and dedicated multichannel monitoring systems, such as those by Hear Technologies and Aviom. Whatever you can afford, make an effort to ensure your headphone monitoring setup is as good as possible.

Anything that contributes to a relaxed atmosphere and a good 'vibe' will have a much bigger impact on most clients than your collection of mic preamps. Some studios will benefit from being in a stunning location or amazing building, but I reckon any studio can be made inspiring and welcoming in its own way. My studio is in a warehouse on an industrial estate, so the approach will never be awe-inspiring, but I've put time and thought into making it feel nice, comfortable and welcoming inside. Lighting, artwork, seating, refreshments, somewhere to hang your coat... This stuff is really important!

The Need For Speed

Modern DAW software leaves us with no excuse for being unable to hit record when needed, and as a performer, it's really frustrating having to wait for an engineer to cue up a section for a drop-in, or while they create a new playlist. So prep your DAW sessions. Use templates. Learn the shortcuts for creating playlists. Make notes. Insert markers in your arrangement window and assign them shortcuts. Also, make sure you have a lyric sheet handy: a lot of artists like to use lyrics to indicate which part of the song they want to punch in from. (It will also help you spot mistakes!) 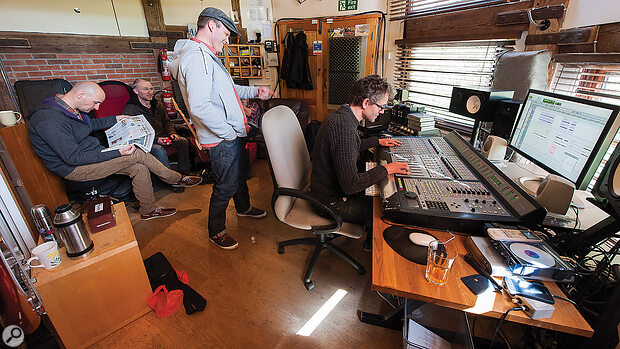 What you say to a performer after they've finished a take can have a huge effect on their mood. Here's a great piece of advice I received early on: whatever you have to say, say it as soon as the take has finished, because if a musician has poured their heart into a performance but has any doubts about it, being greeted with silence can be really disheartening. What you say depends so much on your personality and how well you know the artist in question but you don't have to be George Martin, or say anything deeply profound.

Whatever you have to say, say it as soon as the take has finished.

As a minimum, make sure the performer has the sense that you're interested and positive, and understand what they're going for. I often like to try and distract a performer by asking some questions about themselves; people generally like others taking an interest in them and it can help them relax. It can also help a player mentally 'reset' if they're becoming stuck. Something else I noticed in my drumming session was that I couldn't be seen from the control room. I quite liked that, as I felt free to do whatever I wanted to get myself 'feeling' what I was doing, but this arrangement makes communication over headphones even more important. 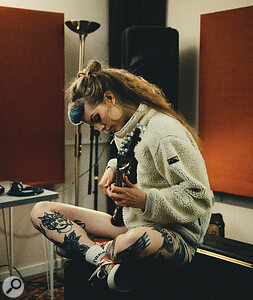 Increasingly, the type of production projects I work on tend to be less about simply recording a band, and more about helping an individual or a smaller group of people develop and capture their sound. Often, this means getting ideas down quickly. And if you, the engineer, can also jump behind a drum kit, play a bass line, or lay down some keys or backing vocals, that's really helpful. So when you have a bit of downtime, sharpen up your old playing skills or learn some new ones. It will make you a better engineer, and you'll end up getting better performances down 'on tape'. 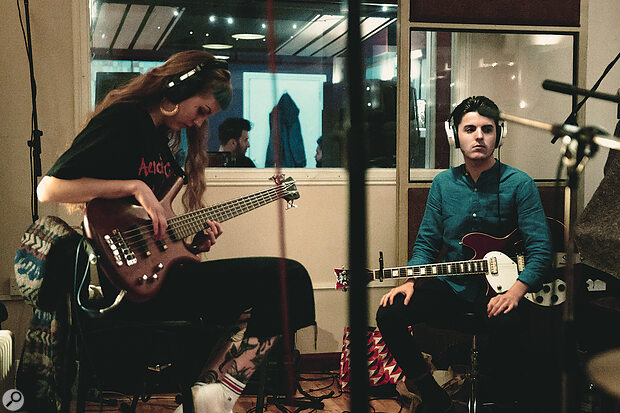 Making musicians wait while you fiddle can ruin a session. With my engineering hat on, I could happily spend hours fine-tuning the kit and placing mics, but if the drummer has come into the studio feeling pumped about recording their latest track, hours spent hitting individual drums and playing the same loop will really take the edge off. So do as much of the setting up and fiddling as you can before you invite the musicians in to play. For drums, the engineering side can be particularly time-consuming, so if the drummer's bringing their own kit, have a plan for when they should bring it and set it up. If you have an assistant, you can cut out a decent chunk of the buzz-killing soundcheck by getting them, not the drummer, to hit individual drums.

The same applies to other performers: the less they have to help you, the more ready they'll be to deliver when you hit record. Make sure you have enough mic options to hand for a vocalist. If using multiple mics on a cab, get them in phase and in a great place to start tweaking. Test your cables regularly so you don't waste time fault-tracing and swapping them out.