Ground loops are the bane of many people's home studios. If you're suffering, this little black box offers a neat solution.

In many cases, a combination of pseudo-balanced wiring and a balanced input will allow unbalanced sources to be connected in the studio without the annoying buzz of ground loops, but how do you deal with ground loops between equipment using unbalanced outputs and unbalanced inputs? 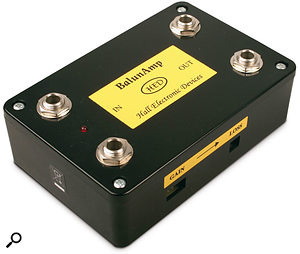 In these situations the 'loop' is usually formed between the screen of the audio cable connecting two pieces of equipment and their mains safety earths. Disconnecting the latter is an extremely dangerous way of breaking the loop, putting the equipment — and the user — at risk of permanent failure! Disconnecting the audio cable screen at one end sometimes helps, but often leads to problems with external interference.

The simplest and most reliable solution is to use a line-isolating transformer, and we have reviewed several suitable devices in SOS over the years. However, good line transformers are expensive, heavy and prone to magnetic interference. Most also introduce unwanted frequency and phase-response anomalies, as well as a significant amount of distortion on loud signals. Transformers are also inherently sensitive to source and destination impedances, so their performance can deteriorate dramatically when they are used with equipment that doesn't conform to the expected impedances.

An alternative approach is to use active electronics to emulate the key attributes of transformers that make them useful for isolating ground loops. Electronic interfaces can be made far more tolerant of source and destination impedances, and provide adjustable signal level matching. One such device is the Balun Amp manufactured by a small British company called Hall Electronic Devices (HED).

The Balun Amp is a two-channel interface built into a small black plastic case that measures 120 x 80 x 35.5mm. The whole unit weighs just 170g and is powered from an external wall-wart providing 15V AC (at 500mA) through a 2.1mm coaxial connector.

The electronic circuitry employs an instrumentation amplifier topology to handle the input signals, and quasi-floating balanced output drivers. The input and output connectors are, to all intents and purposes, 'galvanically isolated' from each other for DC. However, to minimise any possibility of RF interference, the sleeve connections are effectively connected together via bypass capacitors at radio frequencies. In essence, the arrangement enables completely transparent audio interfacing with a high degree of ground isolation, and it works equally well regardless of whether the source or destination devices are unbalanced or balanced.

The Balun Amp's inputs present a very high impedance of over 1MΩ, while the output impedance is a low 50Ω. The unit can provide a maximum output of +20dBu into an unbalanced destination, and +26dBu into a balanced input. Level adjustment is independent for each channel, and is controlled with two sets of recessed DIP switches, providing up to 24dB of gain and 12dB of loss, both switched in 6dB steps.

The audio connections are via TRS quarter-inch sockets on the top panel, and the signal is connected across the tip and ring connections. The sleeve contact is used purely for cable-screening purposes, although the top channel's input socket sleeve is coupled directly to the 0V reference of the electronics, to maintain an acceptable common-mode voltage range for the input circuitry. Consequently, when the Balun Amp is being used to interface a single signal, it should be connected through the top channel.

Connecting an unbalanced signal with a tip-sleeve (mono) jack plug will work as far as signal transfer is concerned, but negates the unit's ability to isolate ground loops.

The Balun Amp is a neat engineering solution to a very common problem. It is easy and effective to use, but only provided that appropriately wired input and output leads are employed. Incorrect wiring will completely remove the unit's ability to isolate ground loops, and in some extreme cases could even result in damage to the circuitry.

The notes supplied with the Balun Amp assume a degree of technical knowledge that may well not be available to many potential users, and I feel that a slightly fuller explanation of the principles employed could be helpful. More importantly, a clear label on the unit illustrating the correct wiring arrangements, and the significance of the ground connection on input one, would be very helpful.

From a practical point of view, I would have preferred the connections to be at either end of the box rather than on the top. Although this configuration might have made the unit's construction more involved, it would have made it easier to use and, more importantly, it would greatly reduce the strain on the connectors.

Another slight niggle is the use of recessed DIP switches to set the levels. Having separate switches for gain and attenuation makes it possible to set up silly gain structures and risk internal overload. It is also frustrating, because a tool of some sort (a small screwdriver or pen, for example) is required to adjust them. A small rotary switch with a logical progression from -12 to +24dB of gain would be easier to use and avoid any possibility of misuse.

However, despite these gripes the Balun Amp certainly does what it is supposed to: completely curing ground-loop hums and buzzes from unbalanced connections between equipment, while preserving audio quality perfectly. I was unable to detect any obvious frequency-response issues: no soggy bass lines, no loss of air, and no increasing distortion on high peaks. There aren't many transformer-based line-isolating units I could say that about.

The Balun Amp is also good for driving reasonably long balanced cables without strain, and I was able to match levels between unbalanced semi-pro and balanced professional equipment quickly and easily. The conversion from -10dBV to +4dBu nominal levels simply requires the first two gain DIP switches to be moved to the 'on' position. The tolerance matching of frequency response and levels between channels is also very high, and there were no image-shift problems at all.

At £115, the Balun Amp may seem expensive, but it compares very favourably with both high-quality transformer devices and professional active units. The only practical disadvantage in comparison to a transformer isolation unit is that the Balun Amp requires mains power, but that is unlikely to be a problem in most situations. On the plus side, it can help correct most signal-level issues, which few transformer boxes can do, and that makes it a useful problem-solving box for the tool bag.

The conversion from unbalanced to balanced (and vice versa) can be achieved with active boxes like the Sonifex RBUL2, the Canford Audio Pro-Interface, or the ProAVM Match-It, also from Canford. There are also devices such as ART's Cleanbox and their passive Dual Transformer/Isolator. We also reviewed, back in March 2003, the Ebtech line-level shifter and hum elminator, which does the same thing passively.