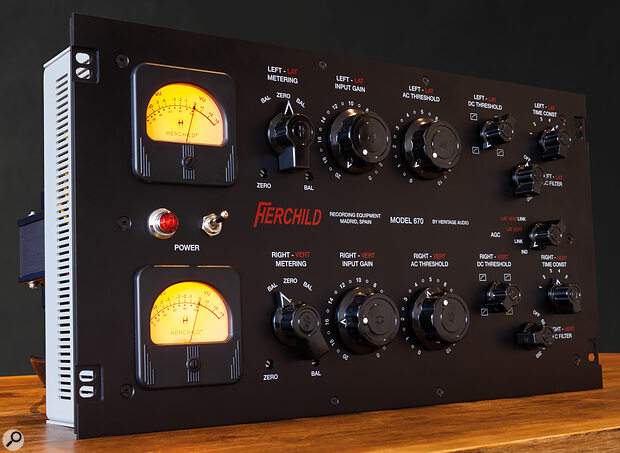 Part of their new American Heritage line, the Madrid‑based manufacturers’ latest offering is their take on the mighty Fairchild Model 670.

There are other ‘legendary’ compressor‑limiters, and then there’s the Fairchild Model 670, the most iconic of them all. Its performance characteristics, rarity (probably fewer than a thousand were produced, of which only a fraction seem to have survived in full working order) and association with the Beatles (plenty of other famous associations are available!) through Abbey Road’s purchase of 12 of its mono precursor, the Model 660, has pushed the price of an original Model 670 to stratospheric levels. Back when Hannes Bieger wrote his masterly exploration of the Fairchild compressors in SOS May 2016, the going price for an original unit was £20,000; if you want to add one to your studio this year, you’ll be looking at over £40,000!

As with many other highly desirable and expensive examples of classic audio outboard, the Fairchild Model 670 has, with and without added functionality, been modelled as a plug‑in and recreated in hardware form. The latest to deliver a hardware homage are Spanish manufacturers Heritage Audio, who recently launched the dual‑channel Herchild 670 and its mono sibling the Herchild 660. Despite its cosmetic appearance, though, the Herchild 670 is not an outright clone but, to borrow a term from the automotive world, a restomod: a product for which the cosmetic appearance of the classic original has been largely maintained, but the components and circuitry have been modified or replaced entirely in order to improve performance and practicality.

The massive 6U 19‑inch rackmounting black front panel is a thing of decidedly retro beauty, carrying, as it does, replicas of the original’s oversized knobs and switches. Being a dual‑channel unit, there are two identical sets of controls. A mechanical VU meter that, in normal use, displays the amount of compression is followed by a large, three‑position Bal/Zero/Bal ‘chickenhead’ function selector switch and its associated Zero and Bal(ance) adjustment screws. Next to these sit the large, finely detented rotary knobs that control Input Gain and AC Threshold. The Input Gain is simply a 20dB attenuator, so turning it completely clockwise gives zero attenuation, a fact reflected in its 20 to 0 scaling. The AC Threshold sets the start point and amount of compression and has a simple 0 to 10 scale, in which 10 (fully clockwise) is no compression and 0 is maximum compression.

The Herchild’s channel controls are completed by a trio of more compact chickenhead knobs, the first two of which were not present on the original Fairchild. The DC Threshold control (which on the Model 670 was an awkward internal adjustment) allows progressive control of the compression ratio, and behaves like a combination of knee and ratio. When turned fully anticlockwise, the Herchild acts as a hard‑knee peak limiter and, as the knob is rotated clockwise, its response mellows to become less aggressive and more gradual until, when fully clockwise, both the ratio and knee become very gentle. It’s worth noting that, as in the Fairchild, compression is always active, which (to me at any rate!) makes the interaction between the controls a source of constant inspiration. The Herchild’s switched SC Filter inserts a high‑pass 50/100/200/350 Hz filter into the side‑chain, to reduce the extent to which the lower frequencies trigger compression.

Sitting between the two channels is the four‑position AGC (Automatic Gain Control) switch, which configures the Herchild 670’s two channels for Ind(ependent), Link (stereo) and Lat‑Vert (lateral‑vertical, a terminology derived from the vinyl mastering world and which we now describe, in reverse, as Mid‑Sides) operation. The Fairchild had no link facility, and its two‑position AGC switch selected either dual‑channel (Channel A‑B) or Lat‑Vert operation. On the Herchild, linking the two channels to form a stereo pair results in the level of compression being controlled by the channel with the highest control voltage, whereas in linked Lat‑Vert mode the average control voltage is used.

Heritage Audio have taken it upon themselves to source literally tens of thousands of NOS military‑grade 6BA6 valves, in order to ensure a future supply which will safeguard customers’ investments in the Herchild line.

The compressor section of the Fairchild Model 670 employed four 6386 vari‑mu twin‑triode tubes per channel: the individual A and B triodes were wired in two parallel four‑triode chains to create a voltage‑controlled amplifier, driven in push‑pull by its input transformer and directly driving its output transformer. Unfortunately, NOS (new old stock) 6386 tubes are now pretty much unobtainable (certainly so for commercial‑scale production) so current manufacturers are forced to seek out alternative solutions that can deliver the same performance as the original.

The Herchild carries a proven 6386 substitute in the 6BA6, a variable‑mu pentode, which, when it’s connected as a triode, exhibits a behaviour very close to that of a single 6386 triode section. This substitution makes for a much simpler tube matching process too, since the two triodes of the 6386 are now ‘separated’. However, it also adds a complication, in that it takes two 6BA6 valves to replace a single 6386 — hence there are eight 6BA6 tubes per channel in the Herchild 670. Although NOS 6BA6 (aka 5749 and EF93) tubes are still readily available, Heritage Audio have taken it upon themselves to source literally tens of thousands of NOS military‑grade 6BA6 valves, in order to ensure a future supply which will safeguard customers’ investments in the Herchild line.

The Herchild 670’s channel side‑chain amplifier setup is rather closer to that of the original Fairchild Model 670, with a 12AX7 as the detector, a 12AT7 (replacing the original’s 12BH7) as the driver, and a modern ECC99 twin triode substituted in for the original’s pair of 6973 beam tetrodes (which themselves had replaced the 6V6 pair used in the earlier Model 660) as the push‑pull output stage, driving its own output transformer to produce the unit’s high‑power compressor control voltage. Adding these three tubes to the eight 6BA6s gives a channel count of 11, bringing the total number of valves in this unit to 22!

Heritage Audio have chosen to give the Herchild 670 a modern, solid‑state rectified power supply, and this delivers a level of performance which, given the limitations of late‑1950s tube‑based power supplies (the Fairchild had a four‑tube power supply), I’m sure the late, great Rein Narma who designed the originals would have envied. Incidentally, Narma had an impressively storied career both in and beyond the world of pro audio. He’s arguably one of the less well‑known giants on whose shoulders the recording industry stands, and his obituary, which you can find on the AES website, is a fascinating read. 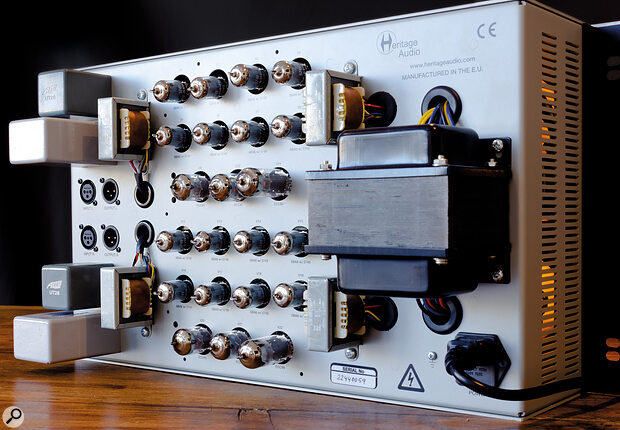 Despite eschewing the tube‑based power supply of the original Fairchild 670, the Herchild employs a whopping 22 thermionic valves, as well as a goodly number of transformers.

Naturally, the Herchild’s 22 tubes require some time to warm up before use. The user manual recommends a minimum of 30 minutes before checking and, if necessary, adjusting the balance between the two sides of both channels’ parallel push‑pull 6386 chains. Checking that balance is simply a matter of ensuring that the VU meter displays the same reading in each of the channels’ Bal switch positions and, if not, equalising the readings using the Bal adjuster.

To my ears, the audio passing through the Herchild 670 emerges subjectively more cohesive, tangible and present between the loudspeakers, and that’s due in no small part to the effects of its 6BA6 tube chains and their AMI UT26 input and Cinemag HS52 output transformers — these are recreations of the Fairchild Model 670’s original UTC and Triad transformers. It’s a sonic fingerprint that makes the Herchild 670 possibly the best ‘glue’ compressor that I’ve come across to date.

Once I’d used the Herchild for a while, I found myself approaching the Input Gain, AC Threshold, DC Threshold and Time Constant controls as an interactive grouping, whose manipulation became increasingly intuitive over time. Given the way that I like to work, the DC Threshold tended to be the control that I interacted with the most, its seamless movement from hard knee/high ratio to soft knee/low ratio allowing me to dial in exactly the compression I wanted to hear. That facility, coupled with the limited selection of attack times (0.2/0.4 ms) and release times (0.3/0.8/2.0/5.0 seconds) in the first four Time Constant positions made configuring the Herchild really intuitive. I found myself gravitating towards the programme‑dependent timings of positions 5 and 6 as starting points and, having chosen one or the other, I could then switch to its attack time equivalents in positions 1‑4 if I felt that I needed a more ‘granular’, focused compression.

The Herchild’s muse was conceived to deliver unobtrusive gain control across all audio frequencies, at a time when music definitely wasn’t ‘all about that bass’, and on more than one occasion I found myself thinking of the Herchild’s side‑chain filters more as a means of allowing bass frequencies to ‘bypass’ the compression, rather than of preventing unwanted compression of higher frequencies. As well as making the Herchild generally more suited to today’s emphasis, in most popular music genres, on the bass end, I found it really useful that the two side‑chain filters were independent, as this allowed me to assign different high‑pass frequencies to the Mid and Sides signals.

The Herchild 670 is excellent. It performs like a Fairchild Model 670, even if cannot be said to sound exactly like one. Mind you, it seems that no two of those 1950s behemoths ever sounded the same once their valves had aged a bit and a couple had been replaced. Whatever your thoughts on the accuracy of the recreation, the Herchild 670 is probably the best compressor I’ve encountered for ‘glueing’ a mix together, and it excels at bringing an almost tangible sense of presence to any source, be it vocals, acoustic and electric guitars and basses, strings, brass, woodwind, drums and percussion. Its ability to impart a sense of ‘really being there’ to an individual track or a mix is very attractive and addictive.

High‑specification, high‑performance, tube‑based audio equipment inevitably comes with a hefty price tag, and the Herchild 670 is no exception to that rule. Yet, while there are certainly more affordable vari‑mu compressors to be found, its price per channel is not uncompetitive in its own market niche; the sonic performance that it’s capable of delivering means that even at this price, the Herchild could well represent an attractive hardware investment for any recording studio or mastering house owner with the means to purchase it. In fact, had I the budget available, the review unit would not leave my side!

None of the Herchild 670’s competitors are directly comparable to it, but you’ll find tube‑based Fairchild Model 670‑inspired units from Stam Audio, Pom Audio Design, Undertone Audio and Analogue Tube. And for those who enjoy ambitious DIY projects and are confident of sourcing the tubes, Drip Electronics offer a PCB for a Model 660 clone.

With an audio path and side‑chain setup that is functionally identical to the legendary limiter that it is based on, the Herchild 670 delivers additional functionality alongside the sonic character and capability of the original.