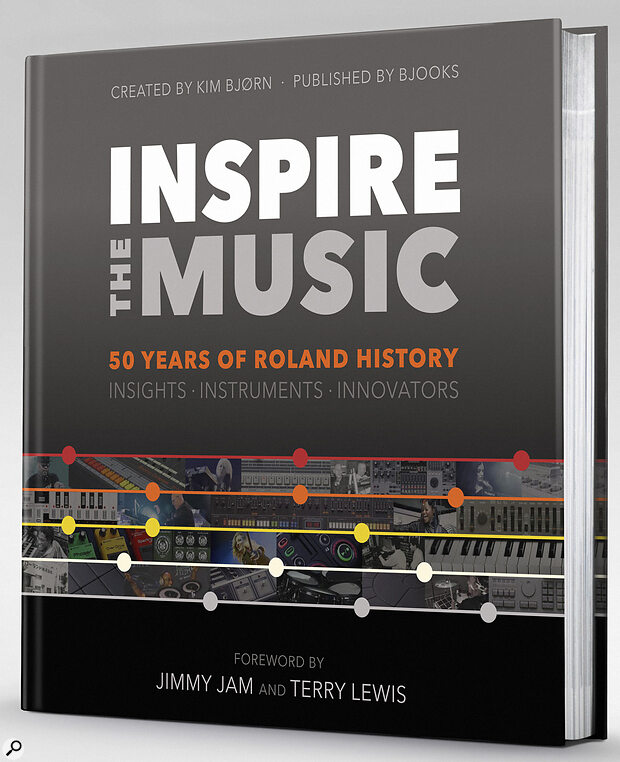 Bjooks take on one of the largest and most respected brands in music technology.

Whatever your musical persuasion, or your use of music technology, be it as a consumer, producer, performer, hobbyist or professional, there is a very good chance that at some point, you have either used or lusted after something made by Roland.

This book is almost certainly the definitive document of Ikutaro Kakehashi’s legacy covering, as it does, almost every aspect of his company and its rich and diverse history. It is divided into sections that explore every facet of Roland’s product lines over the last half century. Drum machines, electronic drums and percussion, guitars, keys, synths and studio gear each have their own chapter, wrapped up at the end with a look back at Kakehashi‑san’s own story and that of his successors.

As you might expect from a Bjooks publication, this isn’t necessarily a tome that is designed to be read linearly, from beginning to end. I found myself immediately searching for the articles dedicated to the Roland gear I know and love, but then being sidetracked by other stuff. It’s akin to researching something on Wikipedia where one link leads to another and soon you’ve fallen down an information rabbit hole!

Nearly 70 artists were interviewed for their unique spin on the Roland legacy, spanning the likes of Thomas Dolby to DJ Jazzy Jeff, Peaches to Jean‑Michel Jarre and Nandi Bushel to the late, great and deeply-missed Don Lewis. The book’s foreword is by legendary production duo Jimmy Jam and Terry Lewis and the entire publication was made with the full support of the Roland Corporation.

There is almost a magazine-like quality to the construction of this book and it is incredibly easy to pick up and dive in, and even more easy to get completely lost as one story leads to a classic print advert, to an interview, and on to another product. Many hours vanished as I plundered the considerable and lavish vault in my hands.

At the rear of the book is a useful timeline that strings together many of Roland’s most significant creations, each entry referring the reader to the relevant page in the book to research it in more depth.

With a subject that spans 50 years of product innovation, the task of gathering up all the stories, tales and milestones would be far too much for one individual, and so Kim Bjørn recruited a team of esteemed contributors that have collectively produced this definitive document. They include the likes of SOS's very own Gordon Reid, the sickeningly talented Alex Ball, Peter Kirn, Collin Russell and Adam Douglas, all expertly corralled and edited by Mike Metlay (author of Synth Gems 1), Diana Smethurst and Kim Bjørn himself. There were numerous other contributors and interviewers whose collective effort has delivered something rather special.

It is a feast for the senses and a fitting tribute to all that Kakehashi‑san created and inspired.

Once again, Bjooks, under the stewardship of its quiet, humble leader Kim Bjørn, have produced a book of immense quality. This quality is not only in the writing, and the design and layout, but also in the hundreds upon hundreds of sumptuous images contained within. It is a feast for the senses and a fitting tribute to all that Kakehashi‑san created and inspired. His work, his ethics and his passion are fully evident here, and the empowerment he has given to musicians the world over, regardless of talent or stature, is immeasurable. This book is the ultimate way to celebrate that.

Bjooks tackle one of the biggest brands in music technology with all their usual style and flair.