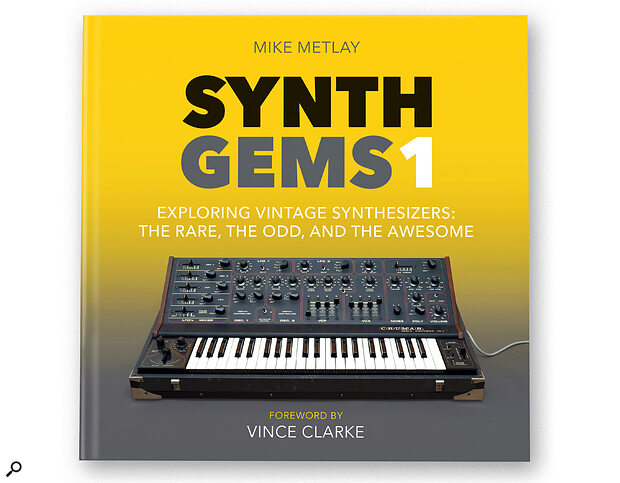 The latest lavish offering from Bjooks collects some of the world’s rarest and most desirable synths between its covers.

One of the best things about researching synthesizer history these days is the Internet. Equally, one of the worst things about researching synthesizer history these days is the Internet. The same can be said for a great many things, because, just like a signal booster, while the Internet increases the good bits of a signal, it also amplifies the bad. There is a desperate need for a filter and, when it comes to knowledge, a respected author with an almost clinical attention to detail and accuracy is required. Luckily for us, Dr Mike Metlay is the Moog Ladder to our Noise Generator. After months, if not years, of painstaking research and collaboration, he has delivered Synth Gems 1, the next in an ever-growing line of superb synth books from the highly respected Bjooks stable.

What we have here is a collection of synthesizers that run the gamut of rarity and uniqueness, many of which you will know of, and many of which you will not. Around 50 instruments come under Mike’s scrutiny, each chapter detailing how the instrument worked, how it came into existence and the impact it had. Accompanying Mike’s words are some of the most exquisite photographs you are ever likely to see of these machines, expertly capturing their visual impact in superb detail. Examples range from the obvious (Moog Minimoog, Sequential Prophet 5, Fairlight CMI, Roland Jupiter 8) to the rare (Yamaha GX‑1, ARP Quadra, OSC OSCar) and mostly unheard of (Gleeman Pentaphonic Clear, EML SynKey and Elgam Carousel). And just like any collective list, there will be examples you agree with and others that you don’t, but Mike sets out to justify his choice with every example and does so with aplomb.

Swamped, as we are, with so much unfiltered information about so many things, books like Synth Gems 1 are more vital than ever in our noble pursuit of the truth about... synthesizers.

After a foreword by the great Vince Clarke, the book starts with an introduction to ‘the synthesizer’ which far from being a patronising section to those of us with decades of experience, is a superb foundation for the uninitiated and newcomers to electronic music-making. And I’d wager that even the most long in the tooth synth heads could learn a thing or two, or at least learn how to better articulate such concepts. This is complemented by a useful glossary at the back of the book.

We are then taken on a chronological tour of the gems, as Mike sees them, and I was sometimes pleasantly surprised not just by the choices, but some of the specific models chosen. For example, the book opens with the Moog Minimoog. I don’t think anyone can argue with that choice. However, it is not the Model D that hogs the limelight here — the preceding models A, B and C are equally represented alongside one another, offering the reader a rare glimpse at the lineage and progression that Moog made with this archetypal instrument.

It is also refreshing to see that alongside such behemoths as the CS-80, Waldorf Wave and Andromeda A6, pivotal gateways into synthesis also get their moment in the spotlight, such as the Casio VL-Tone, EDP Wasp and Ensoniq’s ESQ-1 and SQ-80. 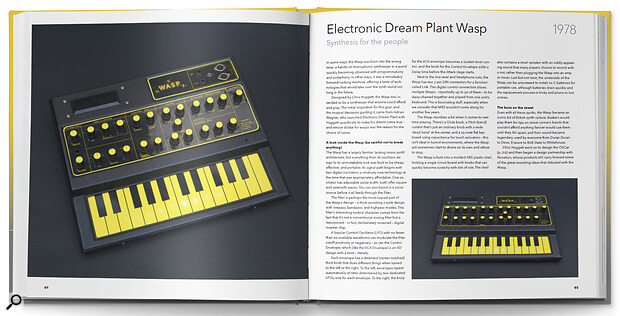 If all of that wasn’t enough, the book also features detailed appendices that contain details of the resources that helped provide the instruments covered in the book, as well as links to preservation establishments, online groups and further reading/viewing, including this very magazine! And knowing that many of these instruments are, for all sorts of reasons, well out of reach for many of us mere mortals, there is a list of software recreations which refreshingly flies in the face of the inherent gear snobbery that often permeates the world of vintage synthesizers.

Swamped, as we are, with so much unfiltered information about so many things, books like Synth Gems 1 are more vital than ever in our noble pursuit of the truth about the wondrous technological achievements found in the world of synthesizers. It is also a source of nerdy dreams and wallet-emptying gear lust!

A unique publication that serves as an historically accurate document, both written and visual, and will, I have no doubt, find itself on the shopping lists of the synth nerds amongst us.