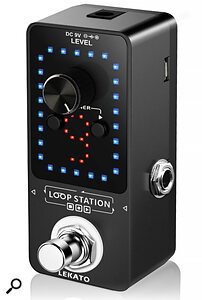 I recently had need of another looper pedal, but as it wasn’t something I’d need very often I wanted to find something affordable and, preferably, compact too. It wasn’t long before I came upon Lekato’s loopers, which are available in various configurations relating to their memory capacity and loop storage abilities. As the top‑of‑the‑range version, which caters for nine loops, still came in at under £70 $70 and there were Black Friday deals for rather less, I thought I’d give it a shot. After all, I could send it back if I didn’t like it... But it turns out that this modest pedal has an impressive specification and feature set, recording at 48kHz/24‑bit resolution, and I ended up keeping it.

Housed in a cast‑metal compact case, this looper requires a 9V DC power source. While some user feedback has suggested that the pedal is noisy, I suspect that the cause of that was probably an inadequate PSU, because when powered from my regulated pedalboard supply it behaved perfectly, with insignificant background noise. The in and out mono jacks are on the sides of the pedal, along with a micro USB connector, while the power inlet is at the top. The controls comprise a level knob for the loop playback, two buttons for stepping the loop number up or down, and a footswitch. A ring of LEDs around a numerical display shows blue during playback and red when overdubbing, with the pattern progressing clockwise as the loop plays. Holding down both loop buttons mutes the input and brings up a basic but perfectly functional guitar tuner, with a simple five‑LED sharp/OK/flat readout in which the note is displayed in place of the loop number.

If you change loops during playback, the current loop will play to the end before the new one kicks in.

In this model, the memory can support up to 40 minutes of mono audio, shared between the nine loops and with a maximum of 10 minutes for any single loop. Pressing the footswitch when a loop is empty starts recording; pressing again goes straight to play mode. Pressing again goes to overdub mode, in which the overdubbed loop has to be the same length as the original recording. A double‑press stops playback. Record, undo/redo, stop and erase are all accessed via different foot commands using this one button. If you change loops during playback, note that the current loop will play to its end before the new one kicks in, which could be a feature or a frustration, depending on what you want to achieve!

Now we come to that USB port, which allows for firmware updates and also facilitates the import or export of loops between the pedal and a Mac or Windows PC. Mac users need an extra piece of software called CubeSuite, available from the Lekato website, to handle the import and export, while PC users can just plug in and go. Files must be in WAV format and renamed as simple numbers, for example 1.wav. Unexpectedly, I found that the pedal also has Bluetooth, which allows some basic control using Lekato’s CubeSuite phone app, as well as use with an optional wireless pedal, which could conceivably make the pedal viable for a very different user base.

I found this looper to be easy to use and the sound quality to be subjectively clean — as long as you use a good‑quality PSU. Given that the memory is big enough to store a few whole backing tracks, I felt that there should have been some way to lock selected loops, to avoid accidental erasure or overdubbing. I mentioned this to Lekato support, who said they would pass on the suggestion to their tech team, so fingers crossed that we might see that in a future firmware update! Other than that, I have to conclude that these Lekato loopers represent excellent value for money. Indeed, they out‑spec many of their more expensive competitors.