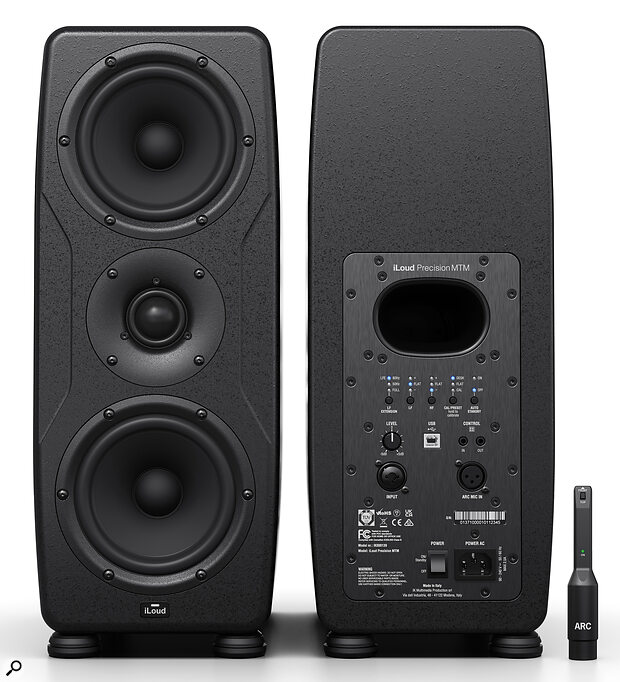 IK’s affordable iLoud range has grown into a serious monitoring tool. We put their new flagship to the test.

With their iLoud range, IK Multimedia have carved out a niche for ultra‑compact yet high‑performance active monitors created using injection‑moulded plastic enclosures and, in the case of the iLoud MTM, with integrated ARC room optimisation. The iLoud Precision MTM subject of this review marks a significant departure, because while the integrated room optimisation remains, ultra‑compact dimensions and plastic enclosures have given way to more traditional proportions and wood‑panel construction.

The iLoud Precision MTM is the largest of a new range that also includes the smaller iLoud Precision 5 and iLoud Precision 6. Each monitor ships with an IK Multimedia MEMS (Micro Electro Mechanical System) ARC 3 measuring microphone and a set of four monitor isolation pads. Simultaneously, IK Multimedia have also launched a standalone X‑Monitor Windows and Mac OS app. X‑Monitor provides monitor configuration functions (so no more reaching around the back to fumble with EQ switches), manages firmware updates, provides a range of default monitor EQ profiles, and also plays the role of front end for ARC 3 room optimisation. So, together with the monitor itself, I’m not short of things to write about. I’ll start with the monitor.

As its name suggests, the Precision MTM is a D’Appolito‑format monitor that incorporates twin 130mm bass/mid drivers located above and below a 38mm shallow‑waveguide‑loaded textile‑dome tweeter. The system is reflex loaded by a rear‑mounted and generously flared port. The Precision MTM cabinet is of MDF construction and not entirely rectilinear, flaunting some subtle curves. The cabinet is finished in a conservative ‘studio black’ textured paint. It feels substantial, and its relatively large and slightly curved side panels respond to a knuckle rap with a satisfying dull and non‑resonant thunk. Precision MTM amplification comprises 145 Watts and 30 Watts of Class‑D power respectively for the bass/mid drivers and the tweeter. The big difference in rated power specification between the drivers serves to illustrate how much more sensitive the latter is than the former.

The bass/mid drivers feature a coated diaphragm that IK Multimedia describe as “ultralight”, and the tweeter features a chamber behind the dome that serves both to lower the driver’s fundamental resonance and to attenuate energy radiated from the rear of the diaphragm. Beyond that, IK Multimedia offers no particular details on the drivers that might suggest they’re anything but conventional. The crossover between the drivers is at 1900Hz and has extremely steep, eighth‑order (48dB/octave) filter slopes. These steep slopes are made feasible by the Precision MTM being very much a monitor of the DSP age. Its DSP runs internally at 96kHz, and along with the crossover functions, it implements the ARC 3 features, the rear‑panel EQ options and the USB‑enabled integration with the X‑Monitor app. The DSP also enables wide‑band time‑domain correction that helps ensure that, on its reference forward axis, the Precision MTM’s phase response stays within ±20 degrees from 150Hz upwards. Control of phase response should help ensure that, on‑axis at least, the Precision MTM will produce notably tight time‑domain performance. This ought particularly to benefit stereo imaging, as our ears rely significantly on timing clues in order to identify audio source position.

Considering the all‑digital internals of the Precision MTM, it’s slightly surprising that it offers only an analogue input, on a balanced combi XLR/TRS jack socket. There’s no digital input of any type. The rear‑panel EQ switches, duplicated within the X‑Monitor app, offer low‑frequency extension and shelf adjustments, desk EQ options, midrange boost and cut, and high‑frequency shelf adjustment. X‑Monitor additionally provides a range of preset EQ profiles, using the five filter elements and designed for different installation scenarios: ‘Small Desk Wall’, or ‘Large Desk Corner’, for example. Alongside the rear‑panel EQ switches are an input sensitivity adjustment control, an input socket for the ARC 3 measuring microphone, and a CAL button that enables the integrated ARC 3 room optimisation to be managed from the monitor rather than from the X‑Monitor app. There’s also 3.5mm jack socket present to connect an optional wired remote control, which offers a non‑app means of switching monitor EQ profiles.

Speaking of the X‑Monitor integrated ARC 3, if my memory serves me correctly, ARC was one of the first room‑optimisation products, and is now on its third major iteration. If you’re unfamiliar with the basic principle, it is to measure the frequency response that the combination of monitor and room acoustics generate, at and around the primary listening position, and then to use the power of DSP (sometimes within the DAW computer, sometimes within the monitor) to equalise the monitor’s inherent frequency response such that the room effects are corrected. Early versions of room optimisation routines were, I think it’s safe to say, relatively unsophisticated, but the field has developed rapidly, ARC 3 being an example of that development, and the technique has matured to become both effective and useful.

Critics of room optimisation, of which I have been one, sometimes point out a fundamental flaw, which is that it sacrifices the tonal accuracy of the direct sound of the monitors (ie. the sound that reaches the ears directly and hasn’t yet bounced around the room) in order to correct flaws that might be more appropriately fixed by room acoustic treatment. This, especially in the case of nearfield monitoring, can result in a skewed direct...