Although hum-cancelling single-coil pickups can be effective, even the best of them will change the guitar's sound — but this system gets rid of the hum whilst allowing you to keep your original pickups.

Single‑coil pickup designs may be considered the most tonally satisfying and articulate by many guitar players, but they have always had something of an Achilles heel, in the form of their susceptibility to induced hum and radiated RF noise. When Fender's Telecaster and Stratocaster were invented, if your guitar hummed, you could simply move a bit further from your amplifier, but players of those iconic instruments today face a far greater challenge. Firstly, the tendency to use much higher amounts of gain results in the noise being amplified just as much as the strings, and secondly, players now tend to be surrounded by far more sources of electronic noise, such as fluorescent and low‑voltage lighting with transformers, lighting dimmers, computers, TVs, mobile phones... the list is substantial and encountered in almost every home studio.

Gibson guitars' engineer Seth Lover was charged with the job of making a noiseless pickup in the mid‑1950s and borrowed bits and pieces from the transformer and telephone technology of the day to come up with the humbucker. As hum is sensed only by the coil and not the magnetic polepieces, his solution was to use two identical coils, connected with opposing polarity, thereby cancelling the hum. When this is combined with reversed polarity in the magnets of the second coil, the string sensing is restored to the same polarity as the first coil, so they combine without cancellation of the signal. The net result is undoubtedly noise free, but equally undoubtedly an entirely different character of sound, as the higher inductance of the two coils lowers the resonant peak, and the widened area of string sensing causes some cancellation of higher harmonics. 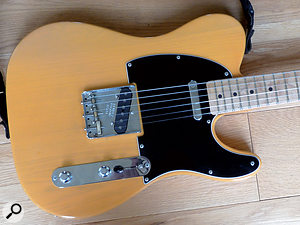 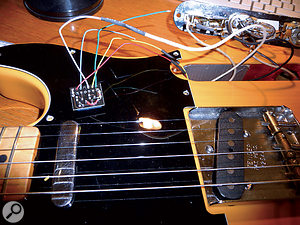 Since then, there have been many attempts at making a noise‑free single‑coil‑pickup guitar, beginning with extensive screening, which can be effective against RF noise, but not hum, and then stacked humbuckers, with one coil above the other. Sensing a single‑coil‑sized area of the string is undoubtedly better than two coils side by side, but you are still dealing with a higher inductance simply through having twice as much wire. Australian pickup pioneer Chris Kinman was the first to successfully use a bottom coil with a lot less wire on it, achieving the necessary hum capture for cancellation by using a more efficient core, leading to his range of very fine‑sounding noiseless single‑coils.

For some players, however, only a true single coil will do, and for them, there was no option other than putting up with the noise, that is until electronic designer and guitar player Ilitch Chiliachki came up with an entirely new noise‑cancelling solution. Ilitch's entirely passive system was initially marketed built into the guitar bodies of US guitar and amp designer John Suhr, and then made available as a stand-alone product, by building it into a slightly oversized version of the spring cover found on the back of trem‑equipped Stratocasters. Ilitch, who seems to be universally known solely via his first name, now runs his business independently and has expanded the range to include solutions for P90‑equipped guitars, Telecasters — the product on test here — and custom offerings, including systems concealed within the body of the guitar.

Ilitch's innovation was to use a widely spread coil of very few turns of wire as his hum‑canceller — effectively, a low‑impedance loop aerial. Connected in series and in opposite polarity to the pickups, it is able to generate the same amount of hum as the pickup, while changing the sound not at all, as there is so little wire added to the circuit. Ilitch's coil measures about 300Ω, or about five percent of the total DC resistance of a typical single‑coil pickup, which is often less than the variation within a set of three vintage Strat pickups.

In the Strat back‑plate version, the 'hum' coil is set into a channel within the plate and the wires fed through to the control cavity via the hole for the spring‑claw's earth wire. In the Tele, the solution employs the pick guard, invisibly housing the coil within its three‑ply structure and feeding the connections via the neck pickup cut‑out.

The negative wire from each pickup is then lifted from ground and connected via the 'hum' coil, placing it in series and out of phase when the other end of the coil is grounded. A pair of trim pots facilitate precise matching of the hum contribution of the 'hum' coil with that of the pickups, allowing them to be 'nulled' by ear.

In the Strat, that's all you need to do but the Tele, with its more complex grounding arrangement around the bridge pickup, requires one more step. The negative output of a Tele bridge pickup usually connects to the conductive base‑plate of the pickup, which, in turn connects to the bridge itself via the conductive mounting screws. A correct Ilitch Tele install therefore involves breaking the connection between the bridge pickup negative and the base‑plate, and running a new earth wire to either the bridge or the base‑plate. Technically, one should probably do the same three‑conductor conversion with the metal cover on the neck pickup, but the consequences of not doing so are negligible, in practice, so I didn't, and have experienced no ill effects so far.

I use single‑coil‑pickup guitars most of the time, usually sat next to a computer and rack of outboard, so I have a real interest in seeing these products work well. And they do, brilliantly, in fact, exceeding my expectations in every way. The sound and feel are unchanged, while the hum is simply gone. It's actually quite difficult to find new and interesting ways of describing the absence of change, so I'll settle for repetition by way of emphasis: the sound is unchanged and the hum has gone. Higher output pickups require different hum coils, using a little more wire, but not enough to make an audible difference to the output. I installed my first Strat back‑plate with a bypass switch, which is as sure a way as any of convincing yourself you can hear a difference even when there isn't one, but I really couldn't.

Single‑coil‑guitar players are used to swivelling around to find the five‑degree arc in which the hum and buzz are least objectionable: with an Ilitch plate on board, you can sometimes find an angle at which there is still a bit of noise, as the hum coil is slightly directional, but that leaves you the other 355 degrees to work with! You can also generate a bit of hum by very close proximity to a hum source, and I mean very close, like inches away — closer than you would ever want to get while actually playing. Full noise cancelling on a Strat also requires that all three pickups be the same, so no reverse‑wound, reverse polarity middle pickup, which many people have used as a hum‑cancelling solution for years. If you want to use an RWRP set with an Ilitch plate, you can, at the expense of hum cancelling in the middle position.

For a totally noise‑free guitar under all conditions, you do still need a full screening job — much of what people think of as single‑coil noise is actually radiated directly into the wiring and control cavity. The Ilitch plates are not cheap, considering the modest cost of all the components that they are made up of, but if we gave marks out of 10, I'd still give this an 11. For me, it is a major problem solved, without sonic compromise, and that's always worth paying good money for.

I'm not aware of any directly competing products. The best hum‑cancelling single coils can certainly sound good, but only the Ilitch solutions offer precisely your original sound and dynamics, simply minus the hum.

We've placed a number of audio examples illustrating the difference the Ilitch Tele Plate makes to the hum — and the difference it doesn't make to the guitar's tone — on the SOS web site and in the iPad App version of the magazine.

A brilliantly simple and effective solution to the age‑old problem of single‑coil hum.