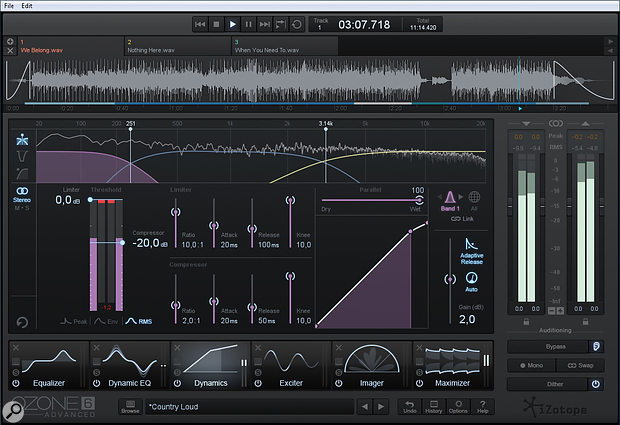 As well as the plug–in version, there’s now a stand–alone Ozone 6 application that can load, play back and process audio files.

A ground–up rethink of Ozone’s user interface is designed to make it less intimidating to home users.

In the course of creating a new user interface for their Ozone mastering software, iZotope’s development team actually consulted a researcher in human cognition, as well as conducting countless interviews with both professional and amateur users. They were surprised to discover that many users never got past loading a preset, and set about making the interface more amenable.

This has got to be a good thing, if my own experience is anything to go by — I’m sure I’m not the only mixing or mastering engineer who has received super–smashed and sometimes plain weird–sounding rough mixes from clients who, when asked about the home–brewed ‘mastering’, have responded “I loaded a preset in Ozone.” In version six most presets have been replaced with new and, in my opinion, more adequate presets. Home mixing musicians will surely miss the Genre–Specific Mastering presets: professional mixing engineers will not! The new presets are still equally potent, but are divided into Light, Balanced and Heavy categories that kind of force the user to actually listen to the result, which can never be a bad thing.

The new user interface is a big step away from previous versions: the colour scheme has been made more friendly, and superfluous functions have been stripped out, resulting in a much cleaner layout with parameters presented in a more intuitive manner. The window is a bit shorter compared to Ozone 5, but is noticeably wider. The tactile and cognitive rewards of sparse graphic design, much larger digits and better positioned parameters are not small. Side–by–side, the old interface looks much more cluttered, with colourful faders mixed with different kinds of buttons and rows of small numbers.

A major difference is the new way of rearranging the order of the processing modules, which is no longer done by clicking the strangely named ‘Graph’ button. Instead, all active modules are nicely presented at the bottom of the window with individual solo, bypass and preset buttons. Rearranging is done by dragging modules and dropping them on top of each other. Each module also has a small meter showing the output relative to the input, so you can see whether it is boosting or attenuating the overall level.

One of the most important improvements is the accessibility of the gain–compensated bypass function. This existed in Ozone 5 but was hidden away; here, it’s accessible by clicking on the ear icon to the right of the Bypass button. With this enabled, Ozone analyses and compensates for the difference in volume, pre– and post–processing. Normally I don’t find these kinds of functions very effective, but in Ozone 6 it works really well. A seasoned mastering engineer will automatically gain compensate for any processing, whereas a happy–go–lucky musician will often be fooled by the increased volume of the processed audio into thinking that things sound better when they don’t. All in all, the development team has done a great job on the new interface.

Out With The Old

The new user interface comes at a price, because some functionality has been stripped away. The most obvious difference is the removal of the reverb, which iZotope apparently no longer consider to be a mastering tool. Another example is the lack of dither options other than iZotope’s MBIT+. The multi–band expander/gate functionality has also been removed, as have the delay settings in the Exciter and two of the algorithms in the Maximizer. Personally, I don’t miss any of these functions: the reverb was CPU–intensive and didn’t sound that special, but it will of course upset some users. The good thing, though, is that Ozone 6 boasts some new and pretty interesting features.

In With The New

First up, the Maximizer has been much improved in terms of processing power. A quick test showed that four instances of the old Maximizer, with all the goodies enabled, measured about 60 percent on the VST Performance Meter in Cubase Pro 8, whereas the Ozone 6 Maximizer, with the same settings, measured about 25 percent. This means it’s now possible to add the Maximizer on the stereo bus of a busy mix project without having the computer perform the electric boogie robotic dance. Thorough testing reveals that the two versions sound exactly the same, except that a Tube mode has been added, loosely based on the Fairchild 670 limiter; it has a bit of character, and I found it quite useful for drum room smashing.

A bunch of new filter shapes have been added to the Equalizer, which now offers Baxandall and Resonant shelving filters, as well as Band Shelf and API–style Proportional Q Bell filters. In Digital Mode, the linear–phase filters are now matched to analogue slopes, and it’s possible to seamlessly fade between linear–phase and minimum–phase response in each filter band. So how does it sound? Well, the updated EQ is a pure joy to work with and it sounds really good. It’s no longer possible to save captured snapshots when you use the Match function to analyse the frequency response of a sound source and apply it to another. Instead, the process of matching the frequency response has been made super–easy. 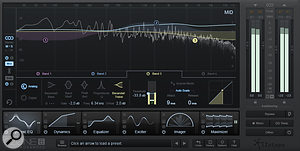 The major new processing module in Ozone 6 Advanced is the Dynamic Equalizer.The compression characteristics in the Dynamics module have been made more flexible through the addition of variable knee, adaptive release mode and API–style side–chain filtering. The new layout makes the process of tailoring dynamics settings to the source much more intuitive, and the adaptive release mode helps produce a smooth yet punchy result — during the test period I never felt the need to disable it.

The Image module must have gone through an overhaul internally, because it sounds better, and the Stereoize function does a much better job than in Ozone 5.

The new Dynamic EQ is an interesting and very nice–sounding addition to the palette of processing. It offers four bands, which can be set to gentle Baxandall bass and treble filters, Band Shelf, Peak Bell or Proportional Q, the last being an excellent tool for corrective filtering. Apart from normal EQ parameters, each band has a Threshold, Attack, Release, Auto Scale, Offset and Inverse Mode setting, making each filter band level–dependent. What makes the Dynamic EQ different from a multi–band compressor is that the ratio is dependent on the gain setting: the more gain or attenuation that takes place, the higher the ratio. The gain setting in effect also limits how much each filter band can be affected. The operation of the Attack and Release controls becomes much more interesting when you engage the Auto Scale function, which adjusts the time constants to reflect the filter frequency. In practice, this makes the Dynamic EQ ride the levels in a more musical way. In Inverse Mode, the selected band starts acting as a de–expander, momentarily raising the level when it goes beyond the threshold: excellent for creative transient shaping.

What intrigued me the most during the test period was the way the Dynamic EQ was able to invisibly attenuate problematic frequencies without making an imprint of itself, and tame honky vocals and electric guitars with too much twang. At the same time, it was possible to reshape the tonal balance of a whole stereo mix in a musical way that isn’t possible with traditional EQ.

The existing plug–in version of Ozone is now joined by a new stand–alone application, which lets you combine the Ozone audio processors with VST and Audio Units plug–ins, in effect making Ozone a complete mastering package. The upper part of the layout contains a transport panel and a waveform display showing the selected sound file. Imported sound files become individual tracks, each with its own tab above the waveform display; changing track is done by clicking a tab or using the transport buttons. Editing is limited to top and tail trimming of each track, with the possibility to add fades in and out, selecting one of four different curves.

The rest of the layout is pretty much identical to the Ozone 6 plug–in, though every track has its own processing: switch tab and the processing chain changes too. This makes it very handy to compare different tracks, and switching takes less than a second, quickly fading in and out between the tracks. When applying fades it would have been nice to be able to listen to the end of one track and then start the next one, but instead, Ozone stops playing when it reaches the end of the track; nor is it possible to insert silence at the end of a track. It’s too basic for the professional mastering engineer, then, but the simplicity of the application makes it perfect for a musician or producer mastering their own work. The good thing about a dedicated mastering application is that no more mixing can be done, so the user is forced to put all of their energy into the mastering process! The gain–compensated bypass function works really well and makes it easy to hear how much processing is being done. When the mastering is completed, new sound files can be created for all the tracks in one go.

The addition of Adaptive Release mode to the Dynamics section helps to set up natural–sounding mix compression.Using VST plug–ins in Ozone 6 was not as easy as I hoped it would be, though: the application repeatedly hung in Windows 7 when scanning the numerous VST plug–ins installed on my system. Eventually I had to add plug–ins one by one, avoiding multi–output VST Instruments and some UAD plug–ins. I’m sure iZotope are working hard on proper AU and VST support, but right now it’s a bumpy ride.

Ozone 6 is one of the most refreshing updates I’ve been fortunate enough to review. The much–improved user interface is easy on the eyes and feels inviting to work with. The Maximizer is still one of the best–sounding limiters on the market, and the fact that it has been made a whole lot leaner on the CPU makes it a no–brainer to use, even in busy mix projects. The Adaptive Release Mode will help novice sound engineers get a better result using the Dynamics in Ozone 6, and the same goes for the gain–compensated bypass function. Even though the Dynamic EQ is designed for mastering, it’s very good at taming problematic frequency build–ups without making an imprint of itself, and should be regarded as a valuable mixing tool too.

The stand–alone application is still in an early development stage, and I’m confident that both the functionality and plug–in support will improve with time. Still, I can’t help but love the simplicity of just drag-dropping sound files into the application and applying a separate processing chain for each track. Ozone 6 is, in my opinion, one of the best mastering suites on the market — but don’t take my word for it, download the 10–day fully working demo and try it out yourself. You won’t regret it!

There are many high–quality mastering bundles available, from companies like Flux, T–Racks, FabFilter, PSP, Sonnox, Universal Audio and Waves. However, none of them are packaged in an equally user–friendly interface especially tailored for mastering.

The lower–priced standard version of Ozone 6 contains most functionality described in this article, apart from the new Dynamic EQ, but it doesn’t make the individual processing modules available as separate plug–ins. The Meter Bridge in Ozone 5 Advanced has been removed and turned into a plug–in called Insight, which is included in Ozone 6 Advanced only; its Loudness History graph and comprehensive metering makes it perfect for post–production and broadcast applications.

iZotope have gone to great lengths to reinvent their flagship mastering suite into something even better. The main focus has been on improving the user interface, and they have certainly succeeded.