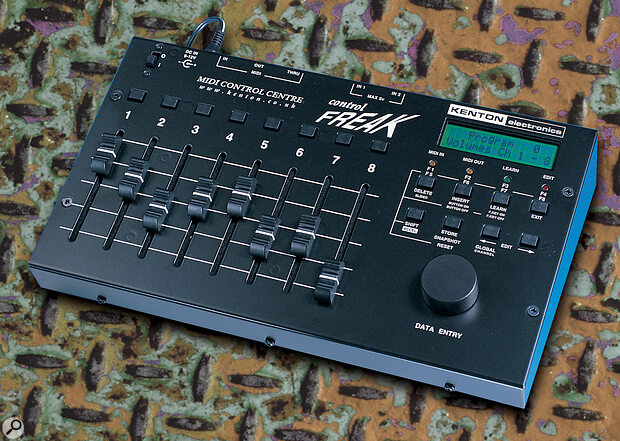 Derek Johnson
& Debbie Poyser take a look at a new programmable control surface which allows you to set up a physical controller for almost any aspect of a MIDI device.

Hardware MIDI controllers are a significant trend of recent years. It's as though, after a long period of struggling with parameter‑access synth editing via LCDs and interfacing with software exclusively via computer keyboards and mice, beleaguered musicians decided enough was enough. Keyboard surfaces broke out in rashes of knobs and sliders, and more boxes covered in physical controllers began to pop up. It seems we're in the midst of a minor outbreak of such devices: the cheapest MIDI controller box yet to appear, Keyfax's non‑programmable Phat Boy, was reviewed in the July 1998 issue of SOS, while Peavey's PC1600X is due to hit these pages shortly, and a brand‑new controller from Kenton Electronics is the subject of this review.

As well as becoming more numerous, hardware controllers seem to be becoming somewhat more cost‑effective: Kenton's Control Freak features programmable sliders and buttons, 128 user Program memories (some filled with overwritable profiles for popular devices and software), a Snapshot mode for easy SysEx dumping of slider positions into a MIDI sequencer, the ability to control sequencers and drum machines remotely, and two quarter‑inch jack sockets which can be used to connect foot controllers and which (more unusually) will perform CV/gate‑to‑MIDI conversion. The Freak will even function as a MIDI analyser — yet it still weighs in at under £250.

The uses of a hardware MIDI controller are numerous: it can access hidden parameters of faceless GM/XG/GS synth modules, make a hardware front end for PC soundcards (which often have fully‑specified synthesis engines), help to edit MIDI synths, or be used as a physical mixer for MIDI + Audio sequencers and hard disk recording programs, to name just a few. The Control Freak, as mentioned, comes from the factory with a set of templates for different applications — for example, four AWE soundcard setups for controlling different aspects of the cards' synth, two Rebirth setups which bring parameters such as filter cutoff and resonance, envelope modulation and decay under slider control, two Matrix 1000 setups (handy, given that the Matrix 1000 can only usually be edited via computer), and Waldorf Microwave and Pulse setups. There are also a couple of simple mixing setups (one for volume and one for pan) for use with multitimbral synths.

Kenton are adding new templates all the time, but if none exists for what you want to do, the whole point of the Control Freak is that you can set up your own. All the sliders, the eight buttons above them, and four extra function keys (which are no different, in their MIDI‑assignable mode, to the buttons above the sliders) can be set to transmit any MIDI data of the user's choice. A complete setup is called a Program, and 128 of these are storable on board. At some point, if a lot of new Programs are saved, the factory templates may be in danger of being overwritten, but since the Freak's memory can be saved via SysEx, it should be possible to get them back. A complete initialisation of the unit will also recall the presets, but will nuke user Programs.

Creating a Control Freak Program is more straightforward to actually do than to explain. Setting one up for Koblo's Vibra9000 Mac‑based software synth (SOS review coming soon), for example, entailed the following simple steps:

Now that you've got an idea of what's involved in manually creating a Program, let's take a closer look at the Control Freak's features.

Physically, the Freak is neatly presented: its black, wedge‑shaped metal case seems sturdily built and measures approximately six by 10 inches. A sparse back panel features MIDI In, Out and Thru sockets, plus the two quarter‑inch jack sockets mentioned earlier. On the control surface, aside from the eight 60mm faders, eight rectangular push buttons and a data‑entry dial used for selecting programs, scrolling through parameters and altering their values, there's a group of eight further buttons below a 2‑line x 16‑character backlit LCD. The top four of these buttons are programmable keys (shiftable, to control two functions each) which also double for Program editing in some circumstances. From the factory, the first three of these keys behave as start, stop and continue controls for a sequencer, with shift functions of MIDI Machine Control start, stop and rewind, and fast‑forward available on the fourth key. In edit mode, the four keys operate as follows:

The four buttons in the next row are dedicated edit buttons and can't be programmed to transmit MIDI data.

Obviously, the Control Freak only has eight sliders, so a maximum of eight MIDI parameters or controllers can be assigned to them in one Program. The buttons, however, can also be set up to transmit MIDI data; there's no effective limit to the data string, so you could transmit single notes or complete chords at the press of a button, if you liked. Similarly, commonly required SysEx data strings — GS Reset messages and so on — could also be assigned to a button. The buttons actually have several states, and can transmit data in several different ways. They can be configured to transmit data when pressed, different data when pressed and then when released, and to send one of two MIDI commands on successive presses.

Other applications are up to your imagination: SysEx strings of up to 44 bytes (checksums and End Of SysEx commands are managed automatically), NRPNs, program changes and more can be transmitted. The eight sliders per Program is the only real limitation;16 would have felt much better. The obvious solution, used in Kenton's factory Programs, is to split up controller assignments into groups and put the resulting Programs side by side.

Bar one or two operational oddities (having to save every edit before moving on, for example) and a slightly obtuse manual (though the hands‑on examples are very useful), the Control Freak is relatively simple to use. Anyone who can't stand any hex or SysEx can use the Learn mode; the resulting assignments can be a little longer and more comprehensive than if they had been entered manually (for example, Learn mode often inserts a learned event's MIDI channel, which isn't always needed), but so what?

Price‑wise, the Control Freak sits neatly in the current crop of controllers between Keyfax's non‑programmable, knob‑based Phat Boy, at £150, and Peavey's PC1600X (which is equipped with 16 faders and switches), at £349. Once you're sold on the concept of a hardware MIDI controller, which one to go for depends on your needs, but if you want programmability and will find eight sliders (plus 12 buttons) sufficient, the Control Freak is probably the best value, especially given its nice set of operational extras.

It was quite a surprise to see the jack sockets on the Control Freak configurable as Control Voltage and Gate inputs — such a thing has hardly been seen since the early days of MIDI. However, should you require the ability to control one voice of a MIDI instrument from a pre‑MIDI analogue synth or sequencer, this is one of the most accessible ways to do it. The inputs weren't actually designed for CV‑MIDI conversion — it's something of a happy accident that it can be made to work. Also, the system offered here by Kenton (who are, incidentally, MIDI‑CV conversion experts) will only work with synths operating on the volt/octave CV system, which would exclude certain models from Korg and Yamaha. Setting up is moderately fiddly: the jack sockets are of the tip/ring/sleeve variety, and the CV input must be connected to the ring, which requires a special lead. Ideally, as well, you'll need some kind of variable resistor in line with the CV input, to allow you to more accurately set up the CV scale so that your playing will be in tune. Scaling can be done using the Control Freak's minimum and maximum slider value parameters, but this is fiddly and the results may not be quite as good as those achieved with the variable resistor just mentioned.

MIDI On The Couch

The Control Freak even has a MIDI Analyser mode; if the unit is powered up with the Shift button depressed, the display clearly shows incoming MIDI data. Four windows of data reveal: MIDI channel, note number and velocity value; Clock, sequencer status and the presence of SysEx data; MIDI channel, program number and bank number; MIDI channel, controller name and value. Could be invaluable if a MIDI rig needs checking out.

Snapshot mode is one of the simplest ways of using the Control Freak, providing you first have a Program that operates with your MIDI equipment and a MIDI sequencer. Simply wiggle the sliders until you hear a sound you like on your synth, put your sequencer into record, and press Snapshot. All the current values are now a part of the sequence and will be transmitted to your synth every time you play back that sequence. If an edit needs more than eight sliders and is being edited with multiple Programs, two snapshots, one after the other, can be sent to the sequencer.

If you think that having to stop and save every edit while naming a Program, slider or button and making data assignments sounds vaguely irritating, you're right. This is because the Freak lacks a RAM buffer, and can't hold one assignment unstored while another is made. An on‑screen Mac/PC Control Freak editor is being developed as we write, however; watch SOS's news pages for details of this software, which should be downloadable, free, from the Kenton web site when it's ready.

A very useful and well thought‑out adjunct to any MIDI system, especially those which include software synths such as Rebirth, or synth modules or PC soundcards without physical controls. Its programmability means that it can adapt easily to a changing MIDI studio.