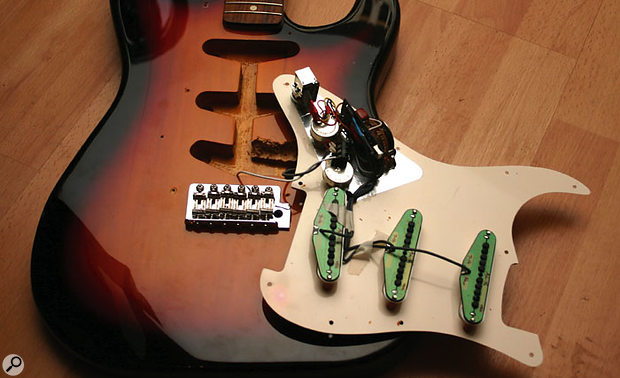 Australian pickup manufacturers, Kinman, have developed a reputation for building perhaps the most authentic-sounding noiseless pickups around. They specialise in Fender Strat replacements, though they also offer them for the Telecaster, and there have been some exciting new developments.

The key to the success of Kinman pickups lies in a patented, stacked humbucker design, which cancels out the noise but delivers essentially the same tone as a single-coil pickup. Many guitarists are deterred from changing their pickups by the prospect of soldering (or paying a guitar tech to do it, and the related possibility that your guitar may be out of action for several weeks!). Chris Kinman has solved this problem in a very elegant way, by developing a complete pickup and control kit that is fitted without any need for soldering.

The kit includes tiny connectors to link the pickups to the five-way switch, and a miniature terminal strip that connects to the ready-wired jack socket. The pots and switch come ready-wired and there's even a terminal strip slot for the grounding wire that goes to the back of the tremolo or bridge assembly. All you need to complete the job are a couple of screwdrivers, spanners for the pot and jack nuts, and about an hour of your time (including restringing, tuning and optimising the pickup heights). It took three years of development before Chris was happy to put his name to the system, so you can rest assured it works very well!

Chris also devised a couple of switching/mixing options, the K7 and K9 controls, to extend the tone of the instrument. The K7 provides a simple way to use the lower tone control to fade in the neck pickup, regardless of which other pickups are active. This modification, already popular amongst Strat players, increases the tonal range. The more ambitious K9 system employs a push switch, built into the lower tone control, that switches from the usual Strat switching setup (and Chris claims the K9 offers more easily available, usable sounds than Fender's new S1 switching arrangement) to a novel system that provides a series configuration when it is switched to the mid/neck combination. It delivers a sweet, punchy tone, not unlike that from a P90 pickup and fading in the neck pickup makes a further tone available. A special K9 harness is also available for the relevant G&L guitar models.

The pickups, controls and wiring harness come fixed to a disposable plastic plate, so you simply unfasten the nuts and screws, slot the whole shooting match into your own scratchplate, then redo the nuts and screws. You get all the necessary knobs, nuts and washers as part of the kit, along with high-quality pots, switches and jack socket, and you even get new knobs. The pickups plug directly into sockets on the selector switch and once the jack cable has been threaded through the hole in the body, its connectors are mated with the terminal strip on the volume pot. That leaves you with only the ground wire to connect to the terminal strip and you can refit the completed scratchplate.

Because the switch assembly is slightly deeper than on a regular Strat, some models (specifically copies or custom bodies) may need extra routing, as mine did, though Kinman's notes say that virtually all genuine Fender Strats have sufficient cavity depth to take the kit without modification. If you don't have a router, you can do the mods using a pillar drill and a half-inch, wood-cutting twist drill bit (it is safest to grind off the drill bit's centre locating spike first, as this may otherwise be just long enough to cut through to the back of the body!). Once you've set up the stops on the pillar drill so that the bit can't get closer than an eighth of an inch from the back of the body, it only takes a couple of minutes to drill a line of shallow, overlapping holes to clear the back of the switch. The minimum depth of routed area beneath the switch must be 1.42 inches (36mm).

The K7 harness essentially gives you seven possible pickup combinations rather than the usual five, with the added flexibility that you can add as much neck pickup to the usual combinations as you like by turning the lower tone control anticlockwise. This 'reverse' approach to the pot wiring means that, when everything is turned up full, you get the stock Fender Strat pickup combinations. Those into using more overdrive, however, may prefer the K9 harness, as its extra series middle/bridge combination provides a more gutsy sound that responds well to overdrive. This option has two tone capacitors that can be selected via a mini slide switch mounted on the side of the selector switch. One option is standard and the other is Kinman's own High Definition tone control, which provides more usable tonal options across its range, rather than just killing the high end stone dead, as the normal control does. Of the two additional sounds available in the K9, you'll find the hottest option with the pickup selector switch in its bridge/middle position where these two pickups are wired in series, with the neck pickup turned down (lower tone pot fully clockwise). The ability to mix in the neck pickup with this hot combination is what gives the other additional sound. K9 controls are available for any Kinman sets, but for the most aggressive results, Chris recommends his Woodstock Plus set. 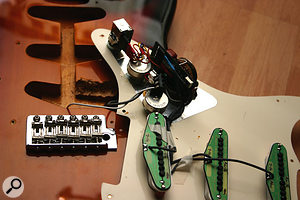 The K9 kit we had for review came with the Traditional MkII set, as I wanted to see how closely these pickups matched the tone of a vintage Stratocaster. Fitting was extremely easy and, as promised, there was no soldering whatsoever, though there was very little room to spare in the body cavities compared to standard Strat parts and, as I was using an imported body for these tests, I also had to deepen the control cavity beneath the switch by about an eighth of an inch. Each pickup comes with screws and rubber tubing in place of springs. I prefer the screws and tubing, as the pickup is held more securely and is better damped against vibration. During fitting, I also noticed that Chris had used a series resistor and capacitor around the volume control to reduce the amount of high end you lose when you turn down the volume on a conventionally wired instrument.

Tonally, the pickups come very close to what you'd expect from a traditional Fender Stratocaster, with plenty of clarity and definition, augmented by that distinctive hollow quality. What's more, I've had a couple of Fender's own deluxe models fitted with Fender noiseless pickups and to me they don't sound nearly so convincing as these Kinman pickups. The elusive two and four switch positions sound pretty much right on the money, and really there's nothing about the tone to give away the fact that these are really stacked humbuckers in disguise. As expected, the sound isn't quite as fat as you'd get from Kinman's Woodstock or Blues sets, but then if you want the classic Strat sound, fat isn't what you're looking for. I've fitted Kinman pickups to my guitars before and they never disappoint. I even fitted a pair of black Kinman Woodstocks to my Parker Nightfly in place of the single-coil pickups normally fitted, and as well as losing the noise, I found the tone changed slightly for the better, though tone is, of course, subjective. The Woodstocks deliver a bit more weight than the Traditional MkII set reviewed here and may be more suitable for rock players.

The ability to bring in the neck pickup using the lower tone control means that you can have all three pickups active at once or just the two outside ones, in addition to the usual Strat combinations, and there are some nice tones here. Chris' alternative tone capacitor offers some interesting tonalities that don't simply rely on rolling off all the top end. The effect is more akin to moving the resonant peak of the pickups, so while the tones change, you still get a useful amount of brightness, even at the most extreme setting. That leaves the mysterious K9 series pickup combination, which produced a useful sound for soloing. Using the Traditional pickup set, it isn't as thick as a conventional humbucker sound, but it has more authority than the usual Strat options, while its creamier high end stops the sound going too gritty when you add overdrive. However, Chris says the K9 with a set of Woodstock Plus will put you right into P90 territory.

You can get the no-solder K7 or K9 harness options with any of the Kinman Strat pickup sets and you'll find full details and prices on their web site (www.kinman.com). Currently, Kinman parts have to be ordered directy from Kinman in Australia, but because you are buying direct the prices are very favourable, especially given the current exchange rate with the Australian dollar. Prices start at $260 USD for a set of three Traditional MkII pickups, $89 for the K7 and $109 for the K9, plus postage.

There's plenty to commend this system. For a start, there's no more noise. It is also easy to fit, requiring no soldering, and it doesn't change the appearance of the guitar (you can even order the pickups without logos). Most importantly, it captures the original single-coil tone very effectively, and has some very worthwhile extra tones. Serious purists may say that the tone and dynamic picking response isn't exactly the same as their single-coil pickups, but I own several strats that I can honestly say all sound different anyway and, for most users, any change in tone should be insignificant in comparison with the benefit of avoiding hum and buzz. These pickups come closer to the true single-coil sound than anything else I've heard.

This is a very good, easy to fit system that offers good value. Not only does it eliminate problems of noise, but it also comes closer than anything else I know to delivering a genuine single-coil sound. 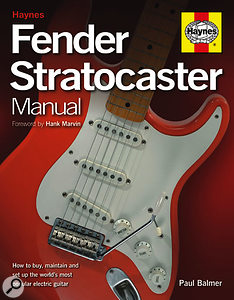 Haynes, the makers of those handy repair manuals that you can buy for your car, have announced a handbook for the Fender Stratocaster. Its subtitle, 'How to buy, maintain and set up the world's most popular guitar', explains the book's content to a tee, and its author, Paul Balmer, is a BAFTA-nominated writer, broadcaster and teacher. There's a foreword from Hank Marvin, and sections include a comprehensive buyers guide, along with in-depth information on all 150 parts of the much-loved axe, with technical tips from John Diggins.

It's not just the genuine Strat that's covered — there's information on over 100 variants, including the Squier Affinity, alongside general interest features revealing fascinating facts such as why Buddy Holly changed his pickup during the recording of 'Peggy Sue'.

The Haynes Fender Stratocaster Manual, costing £17.99, would make a great Christmas present and is out now.