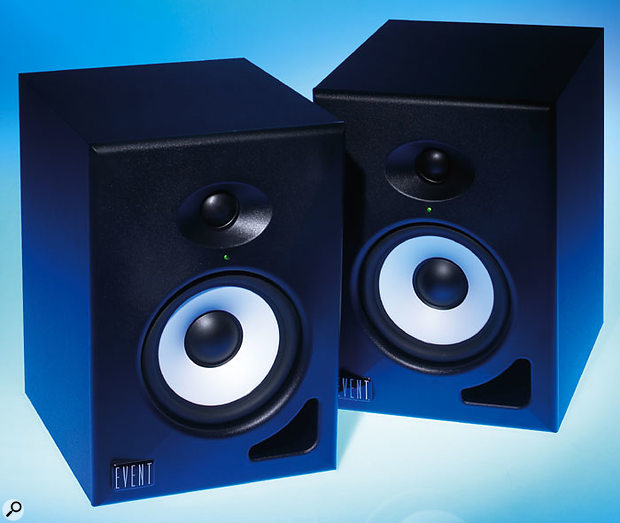 Surely you can't get a good bass response from small monitors... or can you?

There's a common misconception that small monitors can't have a decent bass response. Actually, they can. What you can't get from a small box is very high SPLs and an extended low end at the same time. Medium-sized studio monitors tend to produce maximum SPLs of around 110dB to 115dB, but when you're sitting only a few feet away, that's a lot of level, and it could even be injurious to your hearing if you listen at high volumes on a regular basis. Where you have a desktop studio in a domestic environment, you can often get better results by using smaller speakers that have a little less bass extension, so that they don't over-excite your troublesome room modes. Also, because you'll be working very close to them, you don't need as much level. The way to get a good bass response from a smaller monitor is to use a smaller diameter loudspeaker for the woofer, as this enables the cabinet to be correctly tuned with a smaller volume of air inside it.

The Event ALP5s are a good example of what can be achieved at the smaller end of the scale. They use a bass/mid driver that is just five and a quarter inches in diameter, with a cone made from the same mineral-filled polypropylene as Event's larger monitors. The cone is mounted within a damped rubber surround and is powered by a high-temperature voice coil. Both drivers are magnetically shielded. A one-inch, soft-dome tweeter takes over from the woofer at 2.6kHz, where the moulded waveguide matches the dispersion of the woofer and tweeter at the crossover point. This tweeter uses a neodymium magnet motor with a ferrofluid-cooled voice coil. 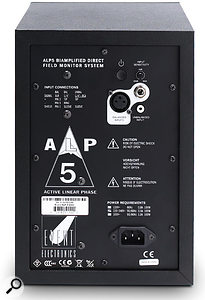 On the rear of the ALP5s, there's a choice of unbalanced RCA phono sockets and balanced or unbalanced XLR or jack for the input.Photo: Alex BibbyMeasuring a compact 7.5 x 10.5 x 9 inches, the cabinets, which include internal damping, are made from a 5/8-inch thick, black, plastic-coated particle board, that is folded around to make the main enclosure. The sculpted baffle hosts the bass port and incorporates time and phase-correction, by placing the tweeter back in a recessed waveguide, to align the audio sources so that sounds coming from either driver reach the listener at the same time. This is by no means a unique design approach, but it does help smooth out the crossover point and preserves the stereo imaging. I notice that Event have trademarked the term Active Linear Phase, even though 'Active' and 'Linear Phase' are common loudspeaker terms. Presumably this means that anyone else wanting to use these terms together will now need to place a comma after the word active!

And talking of active, the woofer is powered by its own 50W power amplifier, while the tweeter has a 30W amplifier. These include protective measures against RF interference, over temperature and switch-on transients, as well as an integral subsonic filter, output current limiting and an internal mains fuse. A fourth-order active crossover (24dB/octave) operates at 2.6kHz.

The mains inlet is a standard IEC connector (something that I've noticed has become increasingly referred to as a kettle lead!) and a power button is located next to the input connectors on the rear panel. A small LED in a recess below the tweeter shows when the speakers are powered up. One clever feature of this recessed LEDs is that you can only see them if the speakers are correctly pointed towards your head, so they double as a practical aid to proper speaker alignment.

There's a choice of balanced XLR, balanced jack or unbalanced RCA phono sockets for the input. The jack and XLR may also be used unbalanced and there's an input sensitivity trim pot with a 20dB gain range, but there are no fancy EQ or position compensation switches, as are commonly found on larger monitors. This package manages a 53Hz-20kHz frequency response, ±3dB (ref. 500Hz), and although this doesn't go as deep as some larger monitors (which typically extend down to between 35 and 45Hz) it is still more than adequate for small rooms with minimal acoustic treatment. The maximum SPL is specified as 105dB, but I had no problems getting them loud enough for sensible mixing.

I installed the ALP5s in my studio in place of my usual monitors and then set about auditioning a range of mixes and songs to see how they held up. The first thing I noticed was that the stereo imaging was extremely good, which isn't all that surprising, as small monitors seem to have the advantage in this area. Tonally, the sound is extremely well balanced and quite detailed, without becoming harsh at the upper end. I like this, because although bright speakers can sound impressive in the store, they soon become fatiguing when you have to work with them for long periods. The soft-dome tweeters contribute to this comfortable character, and vocals also come across very naturally, with a strong mid range. I immediately felt comfortable with these speakers and soon forgot they were there, which is generally a good thing: monitors should bring your attention to the music played over them, not to themselves. Some small speakers tend to sound boxy when pushed hard, but at realistic monitoring levels the ALP5s sounded quite happy. At the bass end there's none of that really low 'kick you in the chest' depth but, unless you play them at extremely low levels, the bass end is still solid and believable and kick drums come over with authority. As I mentioned earlier, if you're working in a small space, it actually gives a more accurate picture if you don't pump too much low bass into the room, as the room resonances will only mislead you. Of course that's not to say you shouldn't get your acoustics as good as you can in the space you have available.

To sum up, on the whole these little speakers behave really well and are ideally suited to small studios or desktop setups.

The Event ALP5s offer good value for money but they are not without some decent competition. Suitable alternatives include M-Audio's BX5A, KRK's RP5, Samson's Rubicon R5a, Dynaudio's BM5A and the Alesis Monitor 1 Mk IIs. However, compared with what the competition is selling for out there, the ALP5s look very attractive. If you're in the market for a small monitor that delivers on performance without wrecking your budget, the ALP 5s must come close to the top of the heap, especially when price is taken into consideration.

The ALP5s compare well in performance with other serious active monitors in the five-inch to six-inch woofer range and sell for less than most. If you need a small monitor and don't require massive bass extension, then these should do the job nicely.